EU ramping up efforts for strategic autonomy in raw materials 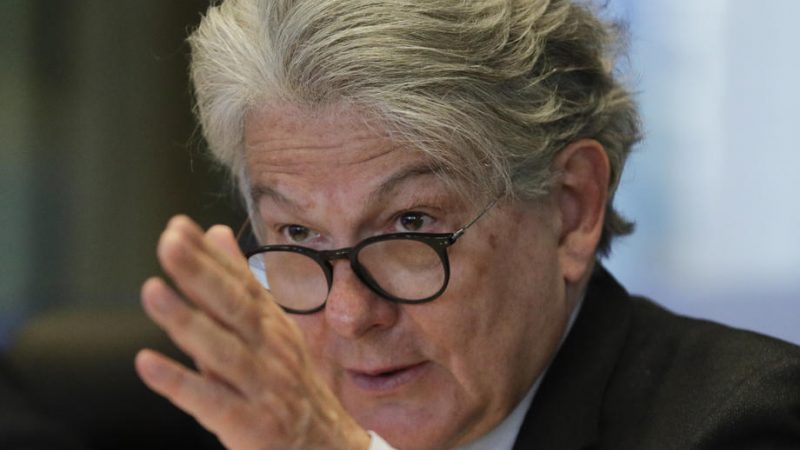 “The goal is to make sure that our strategic dependency is diminished because considering our digital, green and resilient transformation without secure access to raw materials is simply not possible,” European Commissioner for Internal Market, Thierry Breton, said at the Raw Materials Summit on Wednesday (25 May). [OLIVIER HOSLET/EPA]

This article was updated with a correction on the mining project in Portugal.

While Europe’s dependency on Russian energy makes headlines, the EU is also increasingly keen to decrease its dependency on third states – most notably China – when it comes to essential raw materials.

The issue of strengthening the bloc’s strategic autonomy in the raw materials sector has risen to the top of the Brussels agenda – with multiple legislative proposals addressing the issue.

“The goal is to make sure that our strategic dependency is diminished because considering our digital, green and resilient transformation without secure access to raw materials is simply not possible,” European Commissioner for Internal Market, Thierry Breton, said at the Raw Materials Summit on Wednesday (25 May).

To lessen the dependency on third states, the EU has already announced a legislative proposal – often referred to as the Raw Materials Act – to “intensify the work on the supply of critical minerals,” Breton added.

The mining of raw materials is currently dominated by only a handful of players, with China, in particular, holding a monopoly in several sectors. This caused disruptions last year when China scaled back the production of magnesium – a key alloy essential for the aluminium industry – greatly affecting Europe, which at the time imported 93% of its magnesium from China.

“It is simply unhealthy if you have certain raw materials segments with more than 80 or 90% dependency on one country,” Bernd Schäfer, CEO of EIT Raw Materials, which has been mandated by the Commission to manage the European Raw Materials Alliance, told EURACTIV.

This holds especially true for countries like China, where “dumping prices and non-level playing field situations allowed them to build a monopoly in this segment,” he added.

Demand for raw materials is currently increasing exponentially. According to projections by the World Bank, the demand for high-impact minerals such as graphite, lithium, or cobalt will increase by 500% by 2050.

As most of this increase stems from energy storage technologies, the Commission’s push for more strategic autonomy is also a necessary prerequisite for the enabling of “decarbonised and digitalised economies,” Maroš Šefčovič, Commissioner for Interinstitutional Relations, said at the Raw Materials Summit.

“It is imperative that we step up our efforts to secure a stable, long-term and sustainable supply of critical raw materials for Europe’s economy and society,” Šefčovič added.

The underlying importance of critical materials was also highlighted by Natalia Larcozana, senior banker at the European Bank for Reconstruction and Development (EBRD).

“The transition to clean energy means a shift from fuel-intensive to mineral-intensive systems,” she argued.

However, Europe’s push to get its share of the cake is not without obstacles, as the exponential growth of the industry is likely to benefit players that already reached monopoly-like positions in the mining of raw materials.

According to Schäfer, Europe now has to act on multiple fronts simultaneously.

“First, we have to grow mining in Europe. Secondly, we have to invest in the whole aspect of circular economy and recycling. And third, we have to diversify supply chains,” Schäfer added.

All of these developments come with their own challenges. While the European Commission has already made the extraction of raw materials in the recycling process a priority in its battery regulation and new packaging directive, recycling alone will not suffice to meet the exponentially growing demand.

The same holds true for mining in Europe. While the continent has some considerable resources when it comes to certain raw materials – like lithium – the process to receive permits for mining can take years, as well as often being met with opposition from local communities.

Portugal – which is considered to be among the lithium-richest EU country – is one case in point.

The Iberian country is embroiled in a fight over a new lithium mine, that has been met with considerable resistance from local communities and NGOs. The approval process for the exploration of the “white gold”, which is an essential element in the production of batteries, has been dragged out for years and was again postponed last week.