The European Union accused the United States on Tuesday (1 May) of prolonging “market uncertainty” with its decision to hold off on imposing controversial tariffs on metal imports from key global trading partners.

The 25% tariffs on steel and 10% duties on aluminium – a key tenet of US President Donald Trump’s “America first” approach to worldwide trade – were due to go into effect on Tuesday.

But after renewed fears of a trade war spooked Wall Street, Trump said he was holding off the levies, offering a 30-day reprieve to Canada, Mexico and the EU.

US holds off on EU, Canada, Mexico metal tariffs for 30 days

US President Donald Trump on Monday (30 April) held off on imposing controversial tariffs on steel and aluminum from the European Union, Canada and Mexico, offering them a 30-day reprieve after fears of a trade war spooked Wall Street.

The European Union, Germany and France all called for EU nations to be permanently excluded from the punishing tariffs.

“The US decision prolongs market uncertainty, which is already affecting business decisions,” the European Commission, the bloc’s executive arm, said in a statement.

“Overcapacity in the steel and aluminium sectors does not originate in the EU,” the Commission added, saying the EU “should be fully and permanently exempted from these measures, as they cannot be justified on the grounds of national security.”

European Parliament president Antonio Tajani tweeted: “We expect EU to be exempted from duties once and for all. We play by the rules – let’s work together to isolate those who don’t.”

Speaking just hours after Trump granted the EU an extension, US Commerce Secretary Wilbur Ross said the move was justified, “because we’re having some potentially fruitful discussions about an overall reduction in trade tensions between the EU and ourselves.”

He told CNBC the talks would cover “a whole lot of topics” between Washington and Brussels but did not specify what Washington is seeking.

“We’re hopeful that something good will come out of it,” Ross said, adding that the US does not plan to provide “protracted extensions” to the tariff exemptions.

Europe – which last year exported over $7.7 billion (€4.41bn) of steel and aluminium to the US market – had lined up its own punitive tariffs on American imports, including iconic items like Harley-Davidson motorbikes, blue jeans and bourbon whiskey.

EU extension was not a foregone conclusion

Trump on Monday has said the “necessary and appropriate means to address the threat to the national security” posed by the metal imports is to “continue these discussions and to extend the temporary exemption of these countries.”

The US also announced it had finalised a trade deal with South Korea, which includes several concessions made by Seoul, including extended tariffs on pick-up trucks and a quota on its steel exports.

Washington has “agreements in principle” with Argentina, Australia and Brazil, “the details of which will be finalised shortly,” a White House statement said. “In all of these negotiations, the administration is focused on quotas that will restrain imports, prevent transhipment, and protect the national security.”

Extensions for Canada and Mexico had been expected, as Mexico City, Ottawa and Washington work on revamping the North American Free Trade Agreement. Canada exported over $12 billion of steel and aluminium to the United States in 2017, with another $3 billion from Mexico.

But an extension for the EU had been less of a foregone conclusion.

The EU’s three largest economies – Britain, France and Germany – held crisis talks on Sunday and the French presidency said afterwards they had agreed “the EU must be ready to act” if Washington presses ahead with the tariffs. 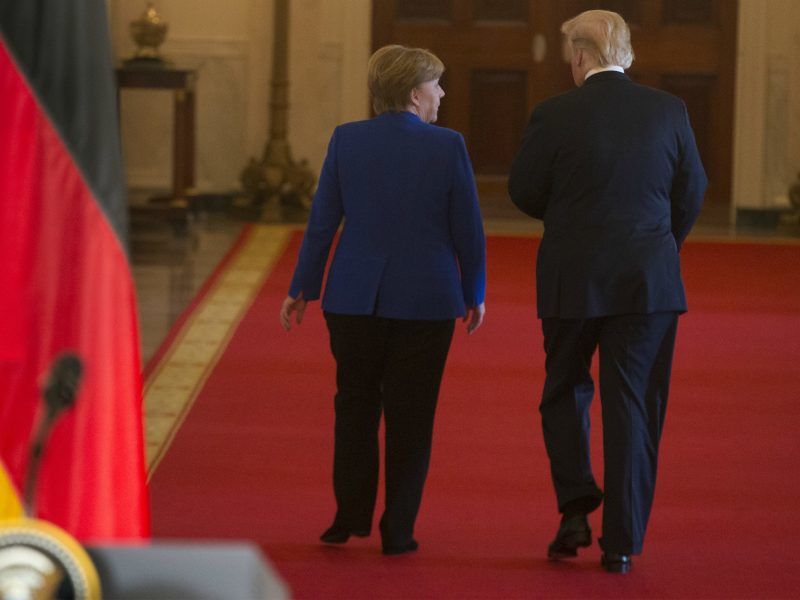 France, Germany, Britain say EU 'must be ready to react' to US trade tariffs

The European Union’s three largest economies agree on the need to be “ready to react” to trade tariffs imposed by the United States, France’s presidency said Sunday (29 April).

“We agree that there is a problem of excess capacity in the steel and aluminium sector. We are ready to work with the United States and other partners to find quick and appropriate solutions,” France’s Foreign Minister Jean-Yves Le Drian and Finance Minister Bruno Le Maire said in a statement.

“But we can only do that calmly when we are certain of being permanently exempted from the threat of unilateral tariff increases.”

“Despite all the evidence of the harm to the EU-US relationship – and to our respective economies – the Administration has opted to continue a policy of uncertainty in its international trade practice,” he said.

In a strident statement, the European Commission said it was willing to continue dialogue but pointedly warned: “We will not negotiate under threat.”

“Any future transatlantic work programme has to be balanced and mutually beneficial,” it said.