The Commission proposed to the member states to maintain the full list of tariffs, which include iconic products such as Levi’s jeans and Harley Davidson motorcycles, instead of a gradual implementation to contain the dispute.

If a majority of EU countries don’t oppose during the approval process in the next few weeks, the executive said the procedure would conclude by the end of June and the tariffs would start applying in July.

Trade Commissioner Cecilia Malmström said the counterbalancing measure represented a “measured and proportionate response to the unilateral and illegal decision” by US President Donald Trump to levy 25% and 10% on European steel and aluminium, respectively.

The Commission challenged the US measures before the World Trade Organisation last week.

Malmström argued that the European duties were in line with the WTO. If the organisation confirms that the US duties were illegal, or after a period of three years, the EU could impose further tariffs worth €3.6 billion, to match the total economic impact of the US penalties on European metals, estimated at €6.4 billion. 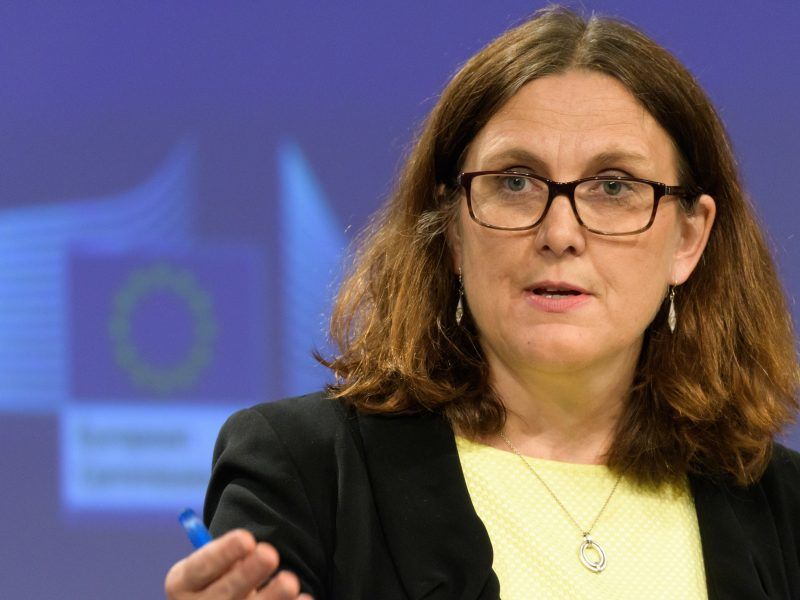 EU to respond to US measures within weeks

The EU’s Trade Commissioner Cecilia Malmström warned at a press conference on Friday (1 June) that “the US is playing a dangerous game” and announced measures the EU will launch in “a matter of weeks” against US trade restrictions on steel and aluminium. But she admitted it was a “very difficult, dangerous situation”.

But this may not be the end of the dispute, as Trump also told his administration to look into the car exports into the US market.

Malsmtröm admitted last week that she was following the inquiry into the car industry “with a lot of anxiety”.

Despite the growing trade dispute, both sides are trying to contain the damage and address together China’s “distorting practices”. They are seen by the US and EU officials as the “root causes” of the excess of steel production, which triggered the tariffs and the forced transfer of technology imposed on foreign companies.

European Commission Vice-President Jyrki Katainen recalled that the European offer to lower tariffs on certain products and to reform the WTO, in line with US wishes, is “still valid”.

“If Americans want to start improving trade environment, they can always find a friend on this side of the Atlantic,” he said.

As the risk of an escalation increases, Katainen warned that it is not only in the European but also in the American interest “to contain the problem and not to expand it”.

“Many American producers who are deliberating buying high-quality steel and aluminium from European producers have already now suffered significantly because the prices have gone up,” the vice president told the press.

Katainen said the problem is “quite concentrated in the administration” because Congressmen from both parties continue to oppose protectionism, just like American businessmen do.