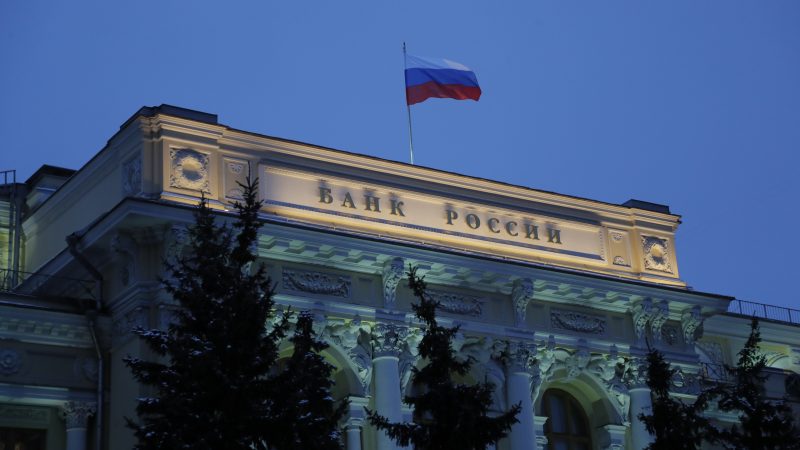 Top European Union officials announced new EU sanctions against the central bank of Russia (CBR) on Sunday (27 February), which will severely limit the central bank’s ability to access its reserves and thus destabilise the Russian ruble.

The sanctions were endorsed by an informal meeting of EU foreign ministers on Sunday evening.

“We will […] ban the transactions of Russia’s central bank and freeze all its assets, to prevent it from financing Putin’s war,” European Commission President Ursula von der Leyen said on Sunday, referring to Russian President Vladimir Putin and the invasion of Ukraine he had ordered.

Already on Saturday the EU, the UK, the US, and Canada had announced “restrictive measures” against the CBR. It is now clear that this means a total freeze of the CBR’s assets by the EU.

“The asset freeze on the CBR is probably the most important sanction,” Piotr Arak, director of the Polish Economic Institute, told EURACTIV, comparing it to the previously announced economic sanctions against Russia.

So much money, so far away

The CBR holds international reserves of about $630 billion, which could usually be used to back the Russian currency when it is in turmoil. However, these reserves are of little use if they cannot be accessed.

According to estimations by Chris Marsh, a global macro and finance analyst, many of these foreign currency deposits are likely held by the German national bank, the Bundesbank.

Bundesbank chief Joachim Nagel has said he fully supported the sanctions against the CBR.

Marsh estimated that the CBR still has access to about a half of its reserves, mainly gold and securities held in the Chinese renminbi. This increases the dependency of the Russian economy on China, which might be exploited by the Chinese government.

The exclusion of some Russian banks from the interbank messaging service SWIFT, announced on Saturday (26 February), might increase this dependency as Russia’s only other international interbank communication system is the one that connects it to the Chinese banks.

Still, the financial sanctions do not yet entirely cut the Russian financial sector off from the European and North-American economies.

Payments for gas and oil deliveries are still possible under the most recent sanctions package, which means that, for the moment, the Russian government’s most important source of revenue and foreign currency remains open.

“We are still one step before full-blown sanctions like in Iran in 2012,” said Arak, stressing that the most effective sanction would be a ban on gas and oil imports from Russia.

Nevertheless, videos uploaded on social media over the weekend, showing long lines of customers withdrawing cash from ATMs, appear to hint at first signs of a run on banks as Russians try to get their hands on as much cash and, if possible, foreign currency while they can.

A bank run would destabilise Russian banks, which would negatively affect the whole Russian economy.

Moreover, a significantly weaker ruble would increase the price of imports for Russian consumers, which might in turn lead to high inflation during an economic downturn.

According to Arak, the Russian government will probably be forced to impose capital controls, limiting both the withdrawal of cash and the exchange of the ruble into foreign currency.

In addition to the sanctions against the CBR, the EU decided to close the European airspace for Russian aircraft, ban key Russian media outlets and sanction some oligarchs close to the Putin regime, after putting Putin himself and his Foreign Minister Sergei Lavrov on the sanctions list on Friday.