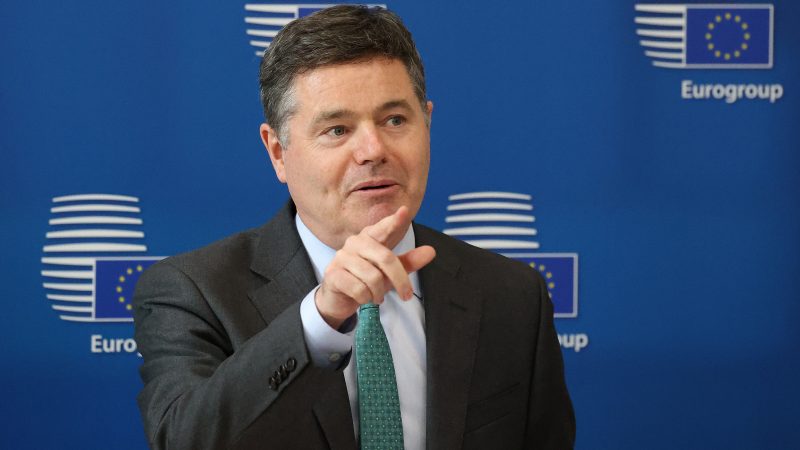 Paschal Donohoe, Minister of Finance in Ireland and President of the Eurogroup, in which euro area finance ministers are gathered. [Nick Bradshaw (Council of the EU)]

The renewed push comes after years of slow progress on the banking union and after the EU heads of state called on the finance ministers in the Eurogroup to agree on a plan to complete the union before the next eurozone summit in June.

“I am obviously and certainly not saying that our differences have been settled,” Donohoe said at a press conference, recalling the past years of stagnation on the issue. However, he argued that it did not make much sense to postpone the integration further into the future.

“The plan has been formulated to reflect the views and the concerns that have been raised by member states in my many months of engagement with them,” Donohoe said.

The draft work plan circulated by the Eurogroup president foresees new measures in four workstreams, namely in the field of crisis management, depositor protection, the single market for banking services, and the diversification of sovereign holdings.

A long-lamented risk for financial stability in Europe is the lack of a European deposit guarantee scheme to make the European banking market more resilient to bank insolvencies.

The euro area finance ministers instructed the Commission to propose a common European deposit insurance fund. According to the work plan, this fund should be built up through the gradual pooling of the national deposit guarantee schemes.

Another weakness of the European banking system is the large exposure banks have to sovereign risks of their home countries. If, for example, the Italian state were deemed at risk of defaulting on its debt, markets would be quick to determine Italian banks to be at risk of failing too since banks often hold a lot of their home countries’ public debt, especially in Italy. This could trigger a vicious cycle, further debilitating the state’s finances.

To counter this specific risk, Donohoe’s work plan suggests to “increase the monitoring and transparency of banks’ sovereign holdings,” for example, through stress tests. Moreover, it proposes to include concentrated sovereign holdings as an element to determine the size of the contribution toward the European deposit insurance fund.

According to Donohoe, both Germany and Italy asked for more work on the contentious issues of the European deposit insurance fund and the exposures to sovereign holdings.

As the work plan is already considered to incorporate the views of the different euro-area finance ministers, Donohoe argued that “the room for manoeuvre is very small.”

“Any significant change on policy content would make an agreement harder to reach,” he said to reporters after the virtual meeting.

The Eurogroup president’s goal is to reach an agreement by June so that the Commission can propose the necessary legislative changes before the end of 2022.