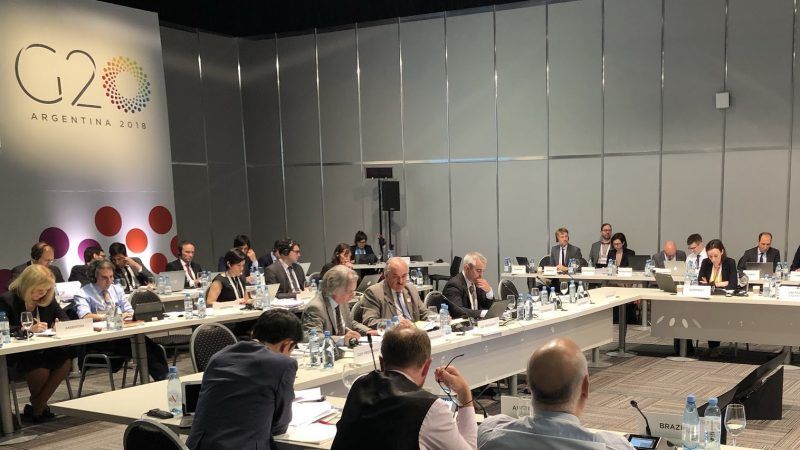 Sherpas of the G20 nations held a fourth meeting this week to prepare the draft conclusions of the summit. [G20 Presidency]

In the tenth anniversary of the G20, the outlook for the upcoming meeting is “rather bleak”, admitted the presidents of the European Commission and the European Council, Jean-Claude Juncker and Donald Tusk.

The reason is not only that the leaders will meet on Friday and Saturday once again in a city taken by protesters and rioters.

In addition to anti-G20 demonstrations, the IMF bailout and the Libertadores Cup final between the local teams of River Plate and Boca Juniors triggered a wave of protests and riots in the Argentinian capital.

Since the last gathering in Hamburg last year, US President Donald Trump has triggered a global trade war that has put the rules-based order “under increasing strain”, Juncker and Tusk wrote in a letter sent to the EU leaders on Tuesday,

“The rules-based multilateral trading system is facing a deep crisis,” the text reads.

Once again, the Europeans will try a last-ditch effort to convince fellow nations, in particular the US, that “there is no better alternative than a coordinated multilateral cooperation” to address the trade tensions, but also climate change, irregular migration, poverty and terrorism.

But the EU leaders also want to reflect on the future of the G20 as “the premier forum for international cooperation”.

The Europeans wants to maintain the body as an “efficient, relevant and credible forum”, forged in the aftermath of the financial crisis to coordinate the global response.

According to the G20 Information Centre at the University of Toronto, the EU and Canada have the highest rate of compliance with the Hamburg summit’s commitments.

But the trade war has put the credibility of the multilateral system at stake. 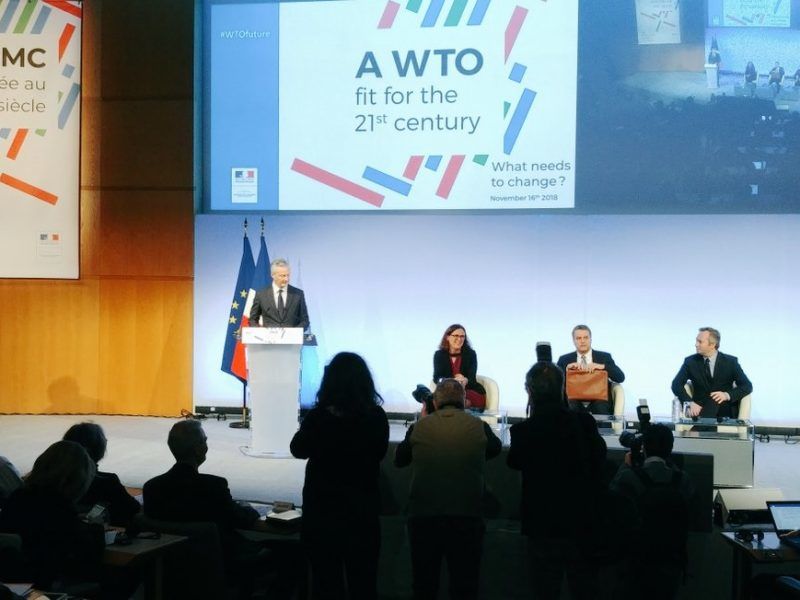 Against this backdrop, the reform of the World Trade Organisation is seen as an essential step to bring badly needed credibility to the multilateral framework.

The EU will push in Buenos Aires to improve the WTO in its negotiating, monitoring and dispute settlement functions.

Given the “collective failure” so far to update the body, the EU considers that the G20 could be “instrumental in providing political impetus” to the negotiations in Geneva to reform the WTO.

But the prospects of the G20 and the multilateral trade system would depend more on the expected meeting between Trump and Chinese President Xi Jinping which is seen as a last chance to achieve a ceasefire in the trade war.

If no agreement is reached, Washington is set to raise duties on $200 billion worth of Chinese imports to 25% from 10% in January.

In addition, Trump has threatened to slap tariffs on the remainder of China’s $500 billion trade surplus to the US.

Analysts and investors hold limited hopes as the differences between Washington and Beijing continued over the past weeks.

In addition, experts understand that the US strategy is not to balance the trade relations, but to undermine China.

Expert: US-China dispute 'is not a trade but economic war'

“If no deal is reached, investors should come to realize that tariffs are no longer a bargaining chip to bring China to the negotiation table,” Daiwa Capital Markets analyst Kevin Lai wrote in a research note.

“Rather, tariffs are becoming part of a longer-term strategy to unplug China from globalization, contain its economic power (and hence its soft and hard power altogether) and give the US greater strategic advantage,” he added.

The G20 follows Xi’s commitment to open up Chinese economy and import more from abroad. However, the Chinese leader’s gesture was met with scepticism in Europe and the US.

An escalation on the dispute between China and the US could also affect the trade talks between the US and Europe. The impulsive US President had continuously linked in the past Europe and China as “foes”.

The Trump Administration has again threatened the Europeans with imposing additional tariffs on its car industry if no progress is achieved by the end of this month, in particular in the field of regulatory standards.

Last October, US Secretary of Commerce Wilbur Ross stressed in Brussels that Trump expected “tangible results” by the end of November.

Trump had “agreed to put in the drawer the threat of future tariffs as long as negotiations were progressing satisfactorily,” added at that time Gordon Sondland, the US ambassador to the EU.

An EU official told EURACTIV.com that there is no deadline set for end of November.

The source added that the EU is implementing what both sides agreed last July “with results” on soybeans and liquefied natural gas, while the work continues on the regulatory cooperation.

Juncker is not expected to meet with Trump on the sidelines of the G20 as he did last July when he visited the White House to contain the threat of new car tariffs.

Instead, the Commission President and Tusk will meet with the leaders of Australia, India, Japan and Argentina.

The other priorities for the EU are to step up the global commitment on climate action, implement the 2030 Agenda and its Sustainable Development Goals, promote the EU proposals for “fair and effective taxation” of digital companies, the promotion of sustainable finance at global level, deliver on commitments in the field of counter-terrorism, and promoting global responsibility on migration and displacement.

In this regard, Europe will call once again for international efforts “to improve the governance of migration and to provide a comprehensive response to the displacement of refugees, in particular by promoting partnerships among countries of origin, transit and destination, international organisations and other stakeholders.”