Looking ahead, the board adds that a fiscal capacity – or budget – for the eurozone would be “useful”, echoing calls from French President Emmanuel Macron.

While unemployment reinsurance and rainy day funds could have “greater potential for stabilisation” in Europe, a fiscal capacity to maintain investment levels in times of sudden shocks “is the most promising way to build a stabilisation function in the medium term”, the board wrote in its first annual report, published on Wednesday (15 November).

Created in late 2015, the EFB is an independent advisor to the European Commission, which evaluates the implementation of EU budget rules under the bloc’s Stability and Growth Pact (SGP).

The Stability and Growth Pact, which limits debt and spending in eurozone countries, has “imperfections” and there is “scope for improvements”, the Board’s chair Niels Thygesen, told reporters.

Despite the flexibility introduced by the European Commission in 2015 – and  controversial decisions to let France, Spain and Portugal off the hook – Thygesen believes that the rules contributed overall to the stabilisation of the euro area.

“Imperfectly implemented rules  can,  in  our  view,  sometimes  prove preferable to the ‘gross errors’ of either a very lax or a very narrow application,” the report reads.

But the Danish economist pointed out that the implementation of the rules over the last year, the period analysed, raised some “suspicion”, in particular as regards to equal treatment between the member states.

The Commission has been criticised from various sides – including the Eurogroup Presidency, member states, the ECB and the IMF – for applying fiscal rules with great discretion.

A strong group of commissioners was in favour on Wednesday (27 July) of imposing at least a symbolic fine on Spain and Portugal for breaching the Stability and Growth Pact, but Jean-Claude Juncker opted for a zero penalty – supported by German Finance Minister Wolfgang Schauble.

As the board noted, the “credibility and effectiveness” of fiscal rules also depend on their “enforceability”. And the sanctions were designed in a way that makes them quite unlikely to be enforced on member states. When Portugal and Spain were sanctioned for the first time last year, the Commission granted its ‘pardon’ to the two Iberian economies.

In order to correct the “complexity and opacity” of  the rulebook, the board proposed “more methodical use of escape clauses” to avoid imposing cuts in times of crisis or under “exceptional economic circumstances”.

And in a warning note to Jean-Claude Juncker’s Commission, self-branded as the most political ever, the board stressed that “guaranteeing that escape clauses are used transparently and non-opportunistically requires independent advice”.

The European Central Bank has criticised the Commission’s easing of EU fiscal rules as “counter-productive”, in its latest economic bulletin published Monday (2 November).

Thygesen also indicated that the forthcoming assessments of the national budgets should give more emphasis to debt indicators.

The eurozone’s deficit is expected to rise to 1.1% of GDP at the end of 2017. But despite a reduction of the deficit below the 3% threshold, debt-to-GDP ratio remains at 89.3%, a relatively high level.

The IMF has also called for a simpler but “more binding” fiscal framework for the eurozone, based on a debt rule and an expenditure rule.

Given the weak enforcement of the Stability and Growth Pact in the past, the board also supports using access to existing EU funds to ensure the rules are respected.

“The aim of conditionality  is  not  to  punish,  but  to  safeguard  the effectiveness  of  public  funds,” the report said.

People familiar with the Fund’s thinking believe that access to new EU funds – for example, a future eurozone budget – could be made conditional to compliance with the revised fiscal rules.

Thygesen presented the report to the College of Commissioners on Tuesday (15 November).

The presentation came ahead of the Commission’s package to bolster the Economic and Monetary Union to be released in early December. It will include a proposal to introduce a fiscal capacity for the eurozone. 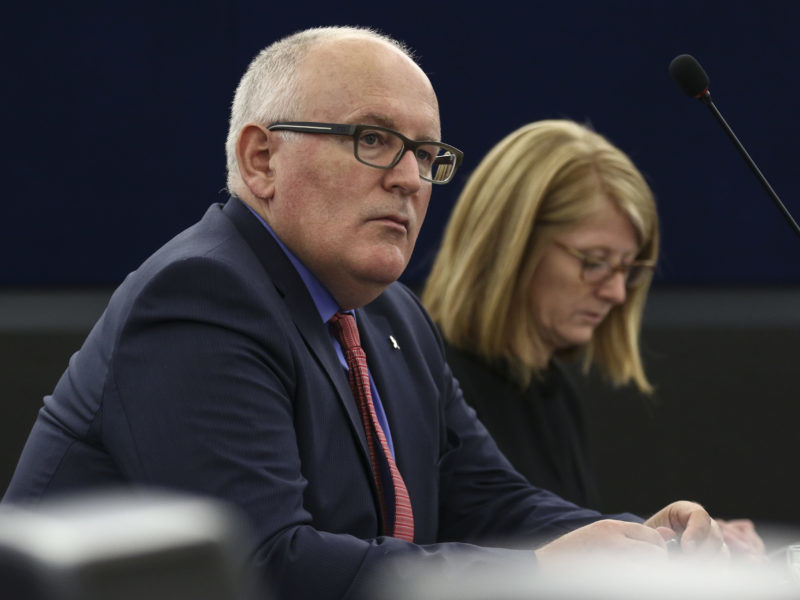 The board also supports a “stabilisation function” for the eurozone.

Among the three options considered by the Commission and the member states for the fiscal capacity, the board sees as the most viable, technically and politically, an investment protection scheme to compensate national expenditure in times of sudden shocks.

An unemployment reinsurance and rainy day funds “may have greater potential for stabilisation”. But the board pointed out that they require clarification as to how they fit in the current rules and the means to finance them.

In the case of an EU reinsurance plan to top up national unemployment schemes, the board’s report notes that temporary transfers between countries should be based on unemployment changes around the affected country’s equilibrium level.

But these levels “are not directly measurable”, the report says, and there is little appetite among the capitals to use vague indicators.

The European Fiscal Board provides the European Commission with an evaluation of the implementation of the EU fiscal rules, including the appropriateness of the actual fiscal stance at euro area and national levels.

The Commission appointed Thygesen as its chairman. He leads a team of four economists. They are Roel Beetsma, from The Netherlands, the Italian economist Massimo Bordignon, Sandrine Duchêne, former advisor to French President Francois Hollande, and the former Finance Minister of Poland, Mateusz Szczurek.

The Board publishes an annual report of its activities, which will include summaries of its advice and evaluations rendered to the Commission.