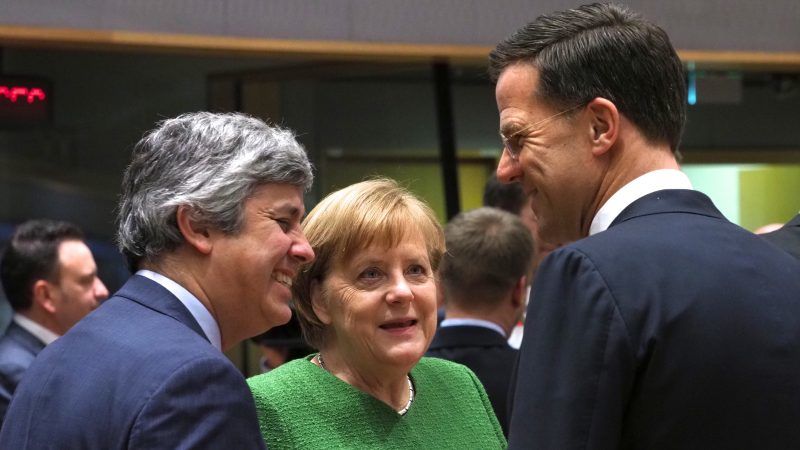 The two-day EU Summit concluded today with a gathering of the 19 eurozone members.

But their discussion failed to remove any of the stumbling blocks affecting the proposals on the table, particularly as regards the banking union, and shed no light on long-term ideas such as the controversial plan for a eurozone budget.

“We have already been able to identify the necessity of finalising the agreement on the banking union by June,” he told reporters after the summit.

In December, leaders decided to prioritise the completion of the banking union, seen as the most ambitious reform since the introduction of the euro.

The outstanding pillars of the package are a common backstop for the single resolution fund to wind down failing banks, and a common guarantee for European deposits.

A dozen countries oppose the European Deposit Insurance Scheme unless banks further clean up their books of bad loans.

“It is absolutely clear that we need rapid progress here,” added German Chancellor Angela Merkel, who spoke to reporters alongside Macron.

During the discussion, after which no conclusions were adopted, the leaders also expressed their views on far-reaching proposals to build a fiscal union by setting up a common cushion to complete the economic and monetary union.

Macron, a staunch defender of the eurozone budget proposal, said that France and Germany would work in April and May on this topic, in order to propose a joint roadmap in June, as agreed by leaders in December.

“We have achieved some major progress,” Macron said.

“I think it was a very good beginning of this debate,” agreed Merkel, who added that “we are on the right track”.

The German chancellor stressed they were “very serious” about concluding the pending proposals and agreeing the new agenda.

European Council President Donald Tusk also highlighted the importance of strengthening the economic and monetary union at this stage.

“We are experiencing the most favourable situation since the introduction of the euro, which makes this a very good time to reflect strategically on our long-term ambitions,” he said.

Although he admitted that some of the proposals, including fiscal capacity, were “controversial”, he maintained an upbeat tone.

“I see avenues to be explored”, he said.

One of the options that has been discussed for years is to use the new financial instrument to support structural reforms in member states and thus increase competitiveness.

Ahead of an EU summit next week, European Council President Herman Van Rompuy has tabled proposals to deepen the Economic and Monetary Union, fleshing out plans for a two-tier Europe with the eurozone at its core.

The link between the fiscal capacity and healthy national economies was also highlighted by some of the backers of the new financial instrument.

But before that, national economies should be competitive and balance their public accounts. It would be “unfair” if the money is used by undisciplined members of the union, he said.