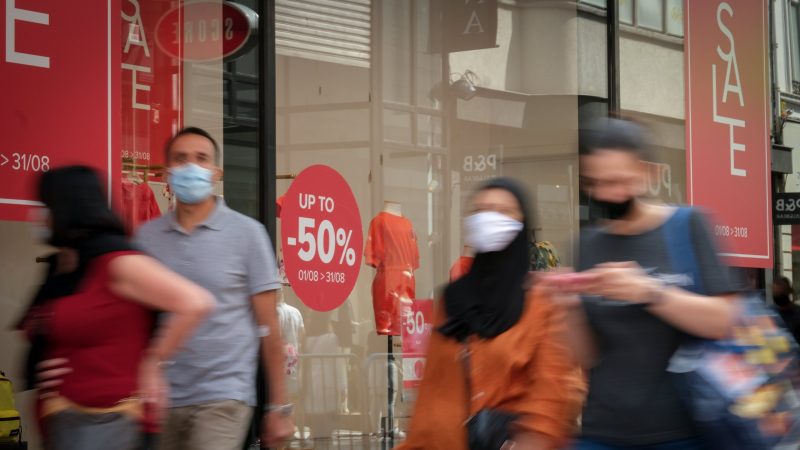 Masked customers in the main Shopping street of Brussels at the third day of the summers sales, in Belgium, 3 August 2020. [Olivier Hoslet/EPA/EFE]

The volume of retail sales in the euro zone rebounded in June to levels recorded in February before lockdowns, official estimates showed on Wednesday (5 August), completing a recovery that began in May after record drops in March and April.

Sales in the 19-country currency bloc rose by 5.7% in June from May, according to Eurostat, the European Union’s statistics office. Spending on clothing and car fuel drove the gains.

The increase in sales was smaller than the 5.9% forecast by economists polled by Reuters, but that was largely offset by an upward revision of May sales.

Eurostat said on Wednesday the volume of shopping leaped by 20.3% in May for the month, revising its earlier estimate of a 17.8% increase, which was already the steepest increase since eurozone records began in 1999.

The two consecutive increases in sales fully offset the record declines in March and April, when many euro zone countries imposed lockdowns to prevent the spread of the novel coronavirus.

In a further sign that retail sales were back to pre-crisis levels, Eurostat said the shopping volume in June was 1.3% higher than a year earlier, the first annual rise since February. The increase on the year defied market expectations of a 0.5% drop.

Month-on-month, retail sales went up in June by double digits in Ireland, Spain and Italy, but fell again in Germany and Austria after large increases in May.

Sales of textiles, clothing and footwear grew by 20.4% month-on-month in the eurozone, after a record 224.1% jump in May. Consumers also bought more car fuel, computer equipment and books.

Online shopping fell instead in June for the first time this year by 6.8% on the month, as consumers went back to brick-and-mortar stores.

One response to “Eurozone retail sales return to pre-pandemic levels”