Expert: US-China dispute ‘is not a trade but economic war’ 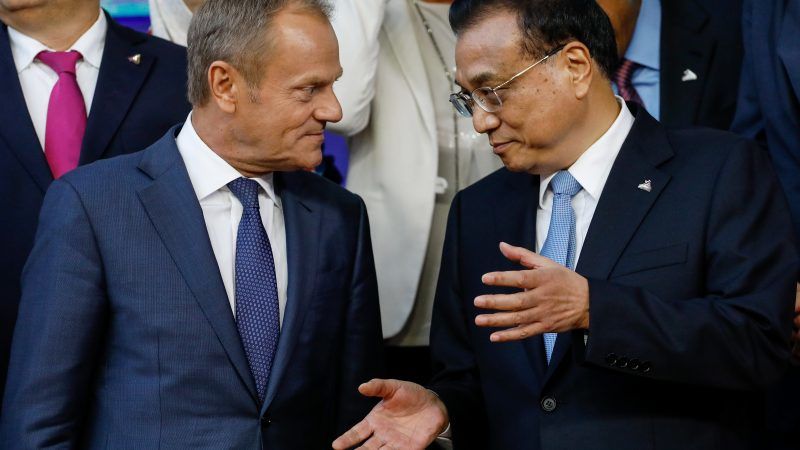 This article is part of our special report A new trade framework for shared prosperity.

“The difference between past trade wars and the current one is the goal”, she told EURACTIV.com in an interview.

The US aimed to reduce its trade deficit when it targeted Japan in the 1980s. The burst of Japan’s bubble that left a decade of deflation was an “unintended consequence”, she said.

But this time around, García-Herrero argued that the US is using tariffs as a “quick and not expensive tool to contain China, if not more”.

“At this stage, everybody knows that,” she added, recalling that the first list of the €50 billion Chinese goods hit by US tariffs included products not exported to the US.

And these trade barriers are only one part of a broader economic war. It also includes restrictions on Chinese investment in the US and a “tax war”, as the tax reform passed by US President Donald Trump was followed by Beijing’s corporate tax cuts.

“More dangerously”, both sides are entering into a new stage with the imposition of economic sanctions, as the case of ZTE showed.

Washington was ready to impose penalties on ZTE, a Chinese telecommunications giant, but Trump in the end decided to hold his guns as the Chinese government was key to facilitating the talks with North Korea.

China and the EU are “in the same boat” when it comes to preserving multilateralism, China’s ambassador to the EU, Zhang Ming, stressed in an exclusive, wide-ranging interview with EURACTIV.com, which also addressed next week’s ASEM summit and China’s relations with its Asian neighbours.

But this was just an impasse. García-Herrero believes that neither China nor the US are going to blink

The dangerous outcome could be the fragmentation of the global economic and financial system, as it happened during the cold war with Comecon, the organisation of economic cooperation set by the former USSR.

“It could create two parallel universes…it is very dangerous”, she said.

The question is where the US would drop the ‘bomb’ of sanctions outside its territory.

In her view, Washington would target Hong Kong, given its transparency and the dollar-based system of the Chinese territory.

But these moves would be fruitless to contain China.

In her view, the largest economy on earth (by many measures) has “well-founded” expectations of becoming a “hegemon”, and “that could only be stopped by force”.

Multilateralism would be the main victim of this economic war. But despite Europe’s ambitions to become the guardian of the multilateral system, the EU “cannot do it alone”.

Trump Administration is openly undermining the global status quo, while Europe and China’s view of multilateralism “have little in common”, in particular when it comes to the issue of subsidies or the concept of market economy.

“It is impossible that the EU and China reach an agreement on a new crippled multilateral world without the US, as it is Washington who created it”, García-Herrero added.

Even more, she believes that this is not a three-way game between Washington, Beijing and Brussels.

US, EU should 'clean the house' and deal with China – US ambassador

Europe and the US should quickly sort out the current issues in their “long-term faithful marriage” so they can speak in “one powerful voice” and address China’s global activities, US ambassador to the EU, Gordon Sondland, said on Wednesday (3 September).

“It is between the US and China, and Europe is the wild card they are competing for”, she argued.

If the EU gets closer to China by progressing on the investment agreement, Trump would slap tariffs on European cars.

While not much can be expected on that front, García-Herrero argued that China could strengthen its ties with Europe without sending dangerous signals to the US by opening up its markets to European companies, as it happened recently with Mercedes.

But Beijing is also opening up in different manners. While foreign investment remains under tight control, China is ready to import a vast amount of goods from third countries in the next few years. “Beijing would even incur a trade deficit …to send a signal of the US’s isolationism”, predicted García-Herrero.

Next Monday (5 November), Chinese President Xi Jinping is expected to speak at the opening of the first China Import Expo.

More than 130 countries and 2,800 companies have decided to take part, including 180 U.S. companies.

However, the Trump Administration will not send senior government officials to the event as will be the case of some European countries, the Chinese foreign ministry said this week.