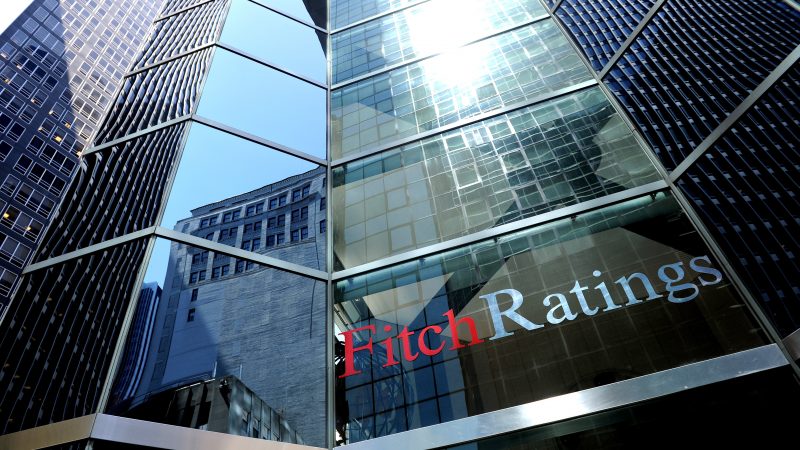 A file photo shows a view of the offices of Fitch Ratings in New York, New York, USA, on 29 April 2010. [Justin Lane/EPA/EFE]

Fitch had not been due to review Italy’s rating until July and the shock move is another blow to a country that has the world’s second highest death toll from the virus and a chronically sluggish economy now heading into steep recession.

The agency said that in line with its policies, Italy had appealed against its decision and “provided additional information that resulted in a rating action that is different than the original rating committee outcome.”

The euro weakened modestly against the dollar following the downgrade.

The agency forecast that the Italian economy will contract by 8% this year, which is in line with the government’s own projection made last week, and said Italy’s public debt will climb to 156% of gross domestic product from 134.8% last year.

Italy’s debt ratio is the second highest in the euro zone after Greece, and the agency’s forecast for this year is broadly in line with the 155.7% targeted by the government of the anti-establishment 5-Star Movement and the centre-left Democratic Party.

“According to our baseline debt dynamics scenario, the debt to GDP ratio will only stabilise at this very high level over the medium term, underlining debt sustainability risks,” the agency said.

It said the country’s banking sector has also deteriorated after the COVID-19 shock, relative to Fitch’s previous expectations of a stabilisation in performance and further asset quality improvement in 2020.

Deaths from the COVID-19 epidemic in Italy climbed by 382 on Tuesday, against 333 the day before, the Civil Protection Agency said, while the total of people infected since the start of the outbreak topped 200,000.

The daily tally of new infections stood at 2,091, higher than the 1,739 recorded on Monday.

The daily death toll of 382 was the highest since Saturday, and Italy’s total number of fatalities since its epidemic came to light on Feb. 21 now stands at 27,359, the agency said — the second highest in the world after that of the United States.

The total of officially confirmed cases, which includes those who have died and recovered, amounts to 201,505, the third highest global tally behind those of the United States and Spain.

Italian Economy Minister Roberto Gualtieri said Fitch had failed to take account of important decisions taken by the European Union and the European Central Bank to support the economies of the eurozone and its members.

“The fundamentals of Italy’s economy and public finances are solid,” Gualtieri said in a statement.

The ECB has launched a €750 billion Pandemic Emergency Purchase Programme (PEPP) which has helped keep a lid on Italian bond yields, while the EU has agreed to set up a jointly funded “Recovery Fund,” the details of which remain to be defined.

Italy’s budget deficit will surge this year to 10% of GDP, Fitch said, after last year’s fiscal gap came in at just 1.6%, the lowest in 12 years.

The Rome government forecasts a deficit of 10.4% in 2020, reflecting the contraction in GDP and stimulus measures worth more than 75 billion euros to try to soften the recession.

A nationwide lockdown has been in place since 9 March to curb the coronavirus contagion, with most businesses shuttered and Italians only allowed to leave their homes for essential needs. The restrictions are to be gradually eased from 4 May.

Fitch noted that the approval ratings of Prime Minister Giuseppe Conte are at record highs and support for the ruling parties has risen during the coronavirus emergency, but questioned whether this political stability would continue.

“We believe political tensions will intensify as the lockdown measures are gradually relaxed and political focus shifts to the economy and the European common response to the crisis,” it said.