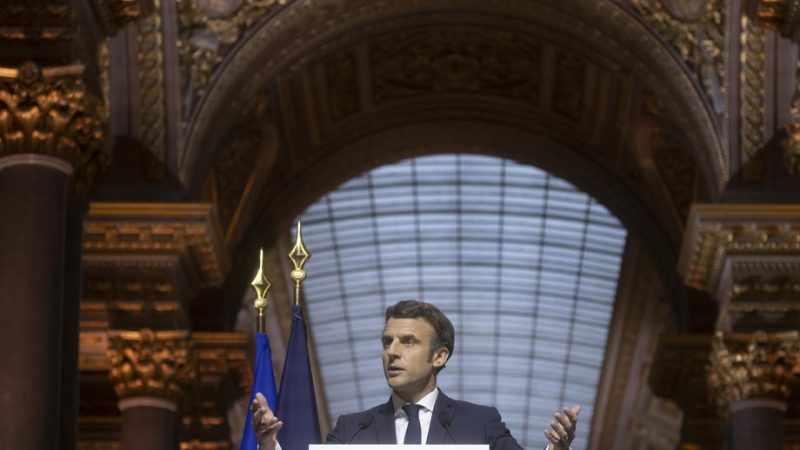 Investments are needed in energy, defence, raw materials and technologies to ensure European sovereignty, Macron said alongside European Commission President, Ursula von der Leyen and the President of the EU Council, Charles Michel, reviewing the many sectors in which the 27 should aim to become fully sovereign.  [IAN LANGSDON/EPA]

New common debt at the EU level could accelerate future European sovereignty and absorb the economic consequences of the break-up with Russia, Macron stressed.

Emmanuel Macron said that the 27 countries were “unanimous” on the need for massive investments to achieve European sovereignty in all areas, the French head of state summed up at the end of a two-day European summit held at the Château de Versailles.

Investments are needed in energy, defence, raw materials and technologies to ensure European sovereignty, Macron said alongside European Commission President, Ursula von der Leyen and the President of the EU Council, Charles Michel, reviewing the many sectors in which the 27 should aim to become fully sovereign.

Michel also emphasised the importance of “consolidating our economic base” and making the European economy “more robust and resilient.”

However, to achieve this goal “we will have to finance these major strategies in Europe,” the French president stressed, adding that Europe needs to “avoid any fragmentation of the market and of European sovereign debt”.

“It could be a question of a mechanism like the one used at the time of the pandemic,” he said, referring to the issue of a €750 billion euro common debt on behalf of the Member States to finance the “Next Generation EU” tool.

He nevertheless suggested that, even if the option is on the table, it is first a question of “agreeing on the objectives” before the “instruments follow”.

The French President has already warned that the severing of ties with Moscow, or those in the process of being severed, would not be without repercussions for the European economies.

The final declaration of the summit pointed out several areas that are currently affected by the sanctions and where dependencies should be reduced.

Europe’s stark dependency on Russian energy imports is one of the issues on the top of the agenda, as the EU is currently importing around 40% of its gas and 45% of its coal from Russia.

“First, our duty is to continue ensuring reliable, secure and affordable supply of energy to European consumers,” von der Leyen said, adding that this would entail Europe getting rid of its dependency on Russian gas in the midterm.

“By mid-May, we will come up with a proposal to phase out our dependency on Russian gas, oil, and coal by 2027,” the Commission President added.

However, energy is not the only area where EU leaders are striving to reduce dependency and to decouple Russia from their value chains.

Russia is one of the biggest European import markets when it comes to raw materials like nickel or palladium, with the latter being particularly important for the chips industry, a sector especially important to Germany.

“It will be a major issue for the future, that we do everything we can to become less dependent on raw material imports, but also in particular raw material imports from Russia,” German chancellor Olaf Scholz said at a press conference following the summit.

Another area of dependency is food supply, with 22% of the EU’s grain imports coming from Russia.

Taking the example of European spending on Russian grain, Macron stressed that “Europe is already destabilised by the war in this respect” and that it “will be even more so in 12 to 18 months”.

“We have the means to impose sanctions, to possibly suffer counter-sanctions and to protect our economies,” he said optimistically.

Asked about the risk of a new wave of social anger due to rising prices, such as the “yellow vests” protest movement in France, he stressed that “the global commodity market was giving rise to rising prices before the war”, noting at the same time that “governments are not there to take all of these inflationary effects”.