One of the protesting interpreters at Rond Point Schuman on 10 June 2020. The placard in Bulgarian reads "Multilingualism". [Mois Bello]

With no practical solution on the horizon, freelance interpreters in the European institutions, stranded in the wake of the COVID-19 pandemic, are continuing protests in the hope of improving their status. EURACTIV Bulgaria keeps following the story as it unfolds.

The pandemic’s economic impact has been devastating for 1,200 interpreters. Many of them are left with no financial support and the European Commission has not been able to offer a working mechanism to put the issue to rest. 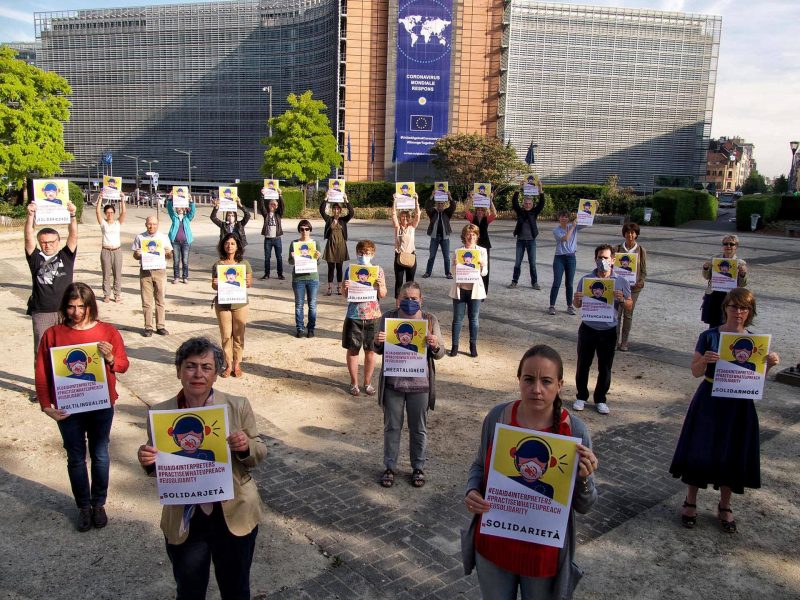 European institutions have declared that social dialogue is ongoing. The interpreters’ negotiating delegation, however, disagrees.

On Wednesday (10 June), 48 freelance interpreters (known as ACIs – conference interpreting agents) protested at Rond Point Schuman in the heart of the European institutions.

The number of protestors was intentionally symbolic. The first protest on 3 June was attended by 24 interpreters holding posters with the word ‘solidarity’ written in each of the 24 official languages of the EU. Now the protestors were 48, twice as many.

As part of the EU institutions, around 1,200 ACIs pay their taxes to the EU. However, being part of the EU structure makes them ineligible for national support schemes or social security coverage in case of unemployment.

In an interview on 4 June, Nicolas Schmit, Commissioner for jobs and social rights, repeated that “No one will be left behind” and declared that the European Commission is taking action. Schmit did not go into details, but pointed out:

“It is obvious that the Commission, which tries to defend the interest of all workers, needs to take fully into account the situation of those who work for the Commission. There is a dialogue with the association of interpreters, so we are on the right track to find solutions for this important category of workers”.

However, representatives of the ACIs say they do not see any ongoing social dialogue with the institutions.

At the third and final round of discussion held on 26 May, the services of the European Commission and the European Parliament made their first and final offer.

The proposed “mitigation measure” consists of a package of deferred contracts to the amount of €1,300. This is an advance payment, which should be redeemed before the end of the year and corresponds to three of four days of work.

The offer was submitted without prior negotiations with the delegation. The proposal will be presented individually to each employee and not to the negotiating delegation as a whole.

This approach by the institutions could hardly be called “social dialogue”, commented one interpreter, who did not want to be named.

More than 400 language experts have expressed their dissatisfaction with the offer and called it ‘humiliating’.

The European institutions are the main employer of freelance translators and have provided permanent employment for them for the last 10 years.

Another piece of the puzzle is the fact that the EU institutions encourage the freelance language experts to relocate from their home country of residence to Belgium by providing long-term contracts only to those who are in Brussels. The goal is to reduce travel costs.

“The bad example of leaving the self-employed without proper help can have severe consequences for the European institutions. These people are freelancers so that the administration does not grow. Without interpreters, national languages will suffer. It is unacceptable to save money on them now,” tweeted Ivailo Kalfin, former MEP and  former  Bulgarian Labour and Social Policy Minister.

One freelance interpreter told EURACTIV Bulgaria that “the European institutions are public and not a private employer and have a social responsibility”. She acknowledged that the trust between the ACIs and their employer was broken.

European institutions made their last official comment on the subject during a press briefing on 8 June.

A Commission spokesman said then that the Commission was aware of the impact of the COVID-19 pandemic on freelance interpreters and the problem of the meetings being cancelled. The spokesman said that every effort was being made to restore the usual workload of translators by installing new remote interpretation systems.

According to representatives of the interpreters, however, these systems suffer from a number of technical problems and are far from being an efficient solution.