By Jorge Valero | EURACTIV with Reuters

President of the European Central Bank Christine Lagarde (L) and Governor of The Bank of England Mark Carney (R) speak at the Launch of COP26 Private Finance Agenda event at he Guildhall in London on 27 February 2020. [EPA-EFE/NEIL HALL]

In a conference call, the finance ministers of the G7 said that they are “closely monitoring” the novel coronavirus (COVID-2019) that started spreading from China in December last year.

“Alongside strengthening efforts to expand health services, G7 finance ministers are ready to take actions, including fiscal measures where appropriate, to aid in the response to the virus and support the economy during this phase,” the group said in a statement.

The text added that their central banks would also “continue to fulfil their mandates” of price stability while maintaining the resilience of the financial system.

Analysts had expected a coordinated interest cut by central bankers, as some of them signalled over the past days that they would act to revive the economy.

But only the US Federal Reserve announced after the call that it would slash interest rates by half a point, after President Donald Trump renewed his calls on the institution to ease its monetary stance.

Meanwhile, the governor of the Bank of England, Mark Carney, said that “we will come to quick conclusions on the appropriate stance of policy”.

George Buckley and Chiara Zangarelli, research analysts at Nomura, said in a document distributed on Tuesday that a coordinated rate cut was quite likely.

“It would hardly be a surprise, based on comments by some central bank governors and finance minister, were we to see a globally coordinated rate cut, potentially as soon as today, that involves European central banks, i.e. both the ECB and the Bank of England,” they said. 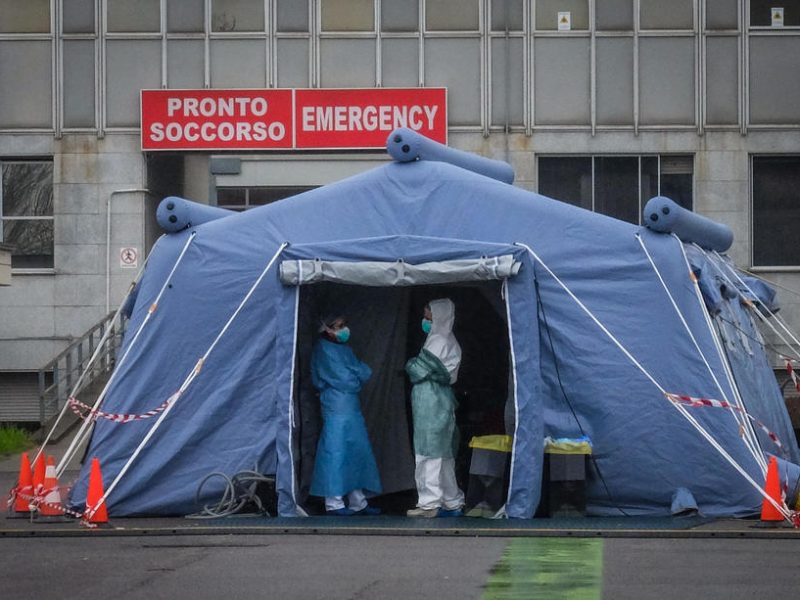 Expectations increased in the eurozone as inflation in the region fell to 1.2% in February, Eurostat said on Tuesday.

The decline was mainly due to a 0.3% drop in energy prices. Without it, and excluding volatile unprocessed food prices, inflation accelerated to 1.4% year-on-year from 1.3% in January.

The drop from 1.4% in January means the rate is even further from the ECB’s target of just under 2%, though it was in line with the forecasts of analysts surveyed by financial services provider Factset.

“The impact of COVID-19 on the economy will distort inflation figures in the months ahead, but it is too early to tell (how much) just yet. For now, the decline in oil prices is the most significant channel through which the virus is impacting inflation,” ING economist Bert Colijn told Reuters.

Besides a potential interest rate cut, measures under discussion by the ECB members include a credit line to businesses hit by the coronavirus outbreak, three sources familiar with the discussion told Reuters.

The bank would expand its targeted longer-term refinancing operation (TLTRO) directed at small- and medium-sized enterprises, who may be the hardest hit by the downturn. But the sources added that no decision on the scheme is imminent as preparatory work would take time. The next ECB meeting is on 12 March.

But some ECB members prefer not to jump the gun. “There’s no imminent need to act, but we’re ready to step in when and where necessary,” Peter Kazimir, Slovakia’s central bank chief, wrote on his Twitter account. “G7 coordination, aimed to shield the global economy, is much appreciated.”

Kazimir added that panic and overreaction could be costly but it was important for the ECB to remain alert.

The G7 conference call came on the eve of the scheduled teleconference between European finance ministers to discuss how to respond to the economic impact of the COVID-19.

Before the coronavirus hit, the European Commission and the ECB called on member states with healthy public accounts, especially Germany and the Netherlands, to increase their expenditure to spur the weak economic growth in the region.

The IMF also warned Austria on Tuesday that it should be prepared to use “stimulus measures if needed” to deal with the coronavirus.

The Commissioner for Economy, Paolo Gentiloni, said on Monday that “the EU is ready to use all the available policy options if and when needed to safeguard our growth against these downside risks.”

However, EU officials did not expect an immediate decision to be taken following the conference call on Wednesday.

The numerous discussions among ministers and central bankers came against the backdrop of growing concerns among some of the most affected sectors by the outbreak.

European airlines warned on Tuesday that the worst is still to come in economic damage to the industry from the rapid spread of COVID-19.

They also called for a relaxation of airport regulations under which airlines can lose lucrative landing and take-off slots if they cancel flights for a prolonged period.

“We request that a temporary waiver be granted by all (EU) member states,” Air France-KLM CEO Ben Smith said ahead of an annual conference of the Brussels-based lobbying group.

Airlines also want a “common set of health requirements for travel to and from the affected regions”, he said.