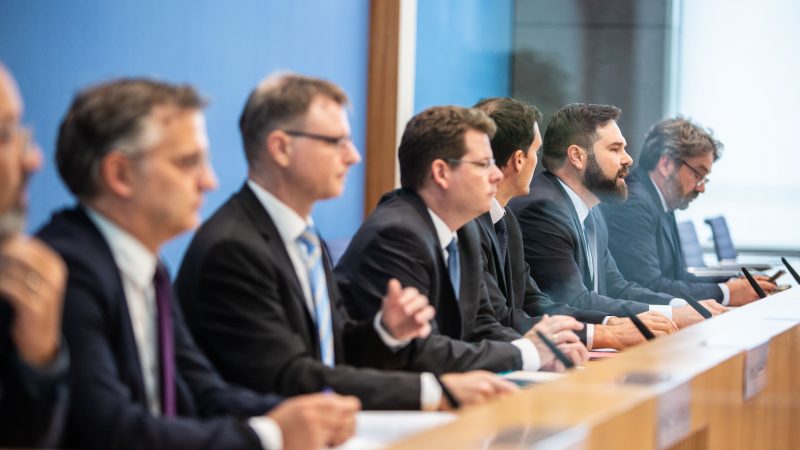 Germany's economic growth fell far behind initial forecasts produced by leading researchers, adding to the challenges of the next German government. EPA-EFE/OMER MESSINGER

Germany’s economic growth forecast for 2021 has been “significantly” reduced by a group of the country’s leading economic research institutes in their bi-annual economic projection report, published on Thursday (14 October).

It comes when Germany is in the process of forming a new government that must tackle the major challenges laid out by the report: demographic change, digitalisation and the climate crisis.

“We are reducing our forecast from the spring significantly downwards for the current year,” said Oliver Holtemöller, professor at the Institute for Economic Research in Halle.

The group’s “spring report” had projected that Germany’s economy would grow by 3.7%, a figure the new report lowered to 2.4%.

“If you look back at the forecast correction history of the institutes, you have to admit that in the spring, we were quite wrong in our assessment of the second quarter,” he added.

The researchers attribute their change in the forecast to two main factors: the ongoing COVID-19 pandemic and its impact on the service sector as 2021 ends and the continual supply chain issues that the German industry is experiencing, especially chip shortages.

“Currently, millions of cars can not be built and delivered,” said Peter Fuß, automobile market analyst at Ernst & Young.

“It is impossible that this year we will even come close to the pre-crisis year of 2019 – in fact, sales will be even lower than in 2020,” he told Börse am Sonntag.

The researchers are more optimistic about 2022. “We forecast that gross domestic product will increase…by 4.8 per cent in 2022,” said Holtemöller. The experts base their forecast on the assumption that the pandemic and supply chain disruptions will largely be resolved by then.

“While the service sector continues to develop positively, growth in industry and production has declined, in particular, due to global supply bottlenecks,” said Peter Altmaier, acting minister of economy and energy.

“It is all the more important now that a new government reduces barriers and burdens and focuses on innovation so that the economic recovery course is not stalled,” he advised the next German government that is currently undergoing negotiations over how best to form a coalition.

Would-be chancellor Olaf Scholz has stated his desire to be in power within the year.

“The forecasts for economic growth this year are deteriorating from week to week. The strong upswing hoped for after the Corona crisis has virtually fizzled out, which is a very worrying development,” said Reinhard Houben, economic policy spokesperson of the business-friendly liberal FDP.

The task now is to ensure that the German economy regains its footing in the year’s final quarter and that 2022 really does become a strong recovery year, he added.

“To achieve this, the new federal government must pursue a more ambitious economic policy and ignite a new growth dynamic. Consistent bureaucracy reduction would be an economic stimulus package at no cost,” he explained.

“Higher corporate taxes, on the other hand, must be a taboo,” he concluded.

Houben’s position is potential political dynamite as his party is expected to enter serious coalition negotiations with the social democrat SPD and the Greens on Friday (15 October).

He is expected to continue in his prominent role in the German parliament and may be part of the technical-economic committee likely to negotiate on behalf of the FDP in the coming weeks.

The parties’ differing views on tax increases are considered one of the most crucial red lines in the complex negotiations.