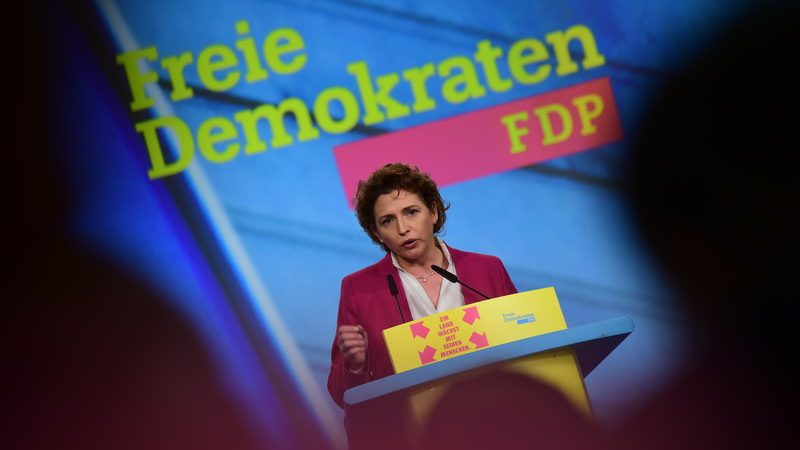 Fricke and Beer emphasised that the rules on national debt should not be "shaken". According to these rules, the members of the Eurozone must reduce their debt level to 60 percent and the annual deficit to a maximum of 3 percent. [CLEMENS BILAN/EPA]

While the EU’s southern countries insist on making the fiscal rules more flexible and relaxing, Germany is reserved concerning the reform of the Stability and Growth Pact – the EU’s most important financial instrument for monitoring state budgets.

“The Stability and Growth Pact has already proven its flexibility,” stressed Otto Fricke, member of the Bundestag and budgetary policy spokesman for the FDP, referring to the short-term suspension of the rules during the COVID-19 crisis.

Nicola Beer, who had co-negotiated the European chapter of the coalition agreement for the FDP, announced a rather adamant party position regarding negotiations of the Stability and Growth Pact.

“The finance ministry, under the leadership of the FDP, will advocate sound budgets and fiscal rules at the European level. It will aim to make the Stability and Growth Pact more assertive,” she told EURACTIV.

Fricke and Beer emphasised that the rules on national debt should not be changed. This means Eurozone members will have to reduce their debt level to 60% and cut the annual deficit to a maximum of 3% of GDP.

“A bad signal for Europe”

These strict budget rules are now considered obsolete by many governments.

Over the past 20 years, Italy, for example, has run a primary surplus almost every year, but its national debt has grown, now accounting for 155% of its GDP. If the EU sticks to the current rules, countries in the bloc would have to bring debt down to 60% within 20 years.

“Italy, too, must reduce its debt ratio to 60% within 20 years,” Beer confirmed the FDP position, adding that at most, one could be flexible in the modelling of the reduction path. “The debt reduction does not necessarily have to be linear,” she said.

Experts warn that insisting on these strict regulations would negatively impact not only the Southern member states but also the entire Eurozone.

Magnus Schoeller, a researcher at the Centre for European Integration Research at the University of Vienna, spoke of a “bad signal for Europe”.

“There is a broad international consensus that this strict interpretation of fiscal rules could have a massive negative impact on economic growth in the structurally weaker Eurozone countries,” Schoeller told EURACTIV.

This could subsequently trigger a recession, or even deflation, in the southern states, “which could also put the Eurozone as a whole at risk”, Schoeller continued.

Instead, Schoeller argued that a balancing mechanism between the export-oriented, highly competitive states and the southern countries of the Eurozone would be needed to ensure longer-term stability in the Eurozone.

However, it remains to be seen whether the FDP-led finance ministry will be serious with its announcements.

“It is possible that they will play a little poker here and that the FDP might, in the end, be less strict than they announced,” Schoeller continued.

“It is still open how the new government will position itself in the discussion on fiscal rules. It seems that they want to talk openly and constructively about the rules,” Krahé told EURACTIV.

In his opinion, much will depend on mutual trust between the German government and the governments of the other member states. “The coalition agreement is an offer to talk,” he stressed.

Although the FDP is sticking to the general rules on new debt, Fricke sees a potential compromise in some areas.

“I can imagine that for investments that are really directed towards the future – for example, in digital infrastructure – the 3% rule could be exceeded for a limited period of time,” said the FDP politician.

One response to “Germany rejects relaxation of EU fiscal rules”