Economy Minister Peter Altmaier does not want to get involved in Lufthansa's operative business, despite the airline having prospects of receiving €5.5 billion in tax revenue and the state potentially becoming a 25.1% shareholder, according to reports from newspaper Der Spiegel. [Nate Hovee/ Shutterstock]

The European Commission and the German government have been receiving a series of open letters. Many of them contain demands to prevent the money from the coronavirus stimulus package from going to sectors that are not environmentally friendly, and stress this is a turning point towards a green economy.

And the business community itself has already launched similar appeals.

At the end of April, 68 large German companies, many from the heavy industry, addressed the German government with the same request: “We, as a company, are assuming social responsibility for society as a whole in this situation and are prepared to play our central role in climate protection as well,” they wrote.

Can the government comply with these requests and link further economic stimulus packages to climate-friendly requirements? And how serious are the companies about their plea?

One of the signatories of the appeal for a green economic stimulus package is steel-processing company Salzgitter AG.

It told EURACTIV that it had not yet applied for an economic stimulus package because external financing of projects to reduce greenhouse gas emissions only makes sense “if it is ensured that the new climate-friendly products can be produced and marketed economically.”

After all, the loans have to be paid back. But for this to happen, the right political and economic framework conditions are needed.

Similar feedback came from steel giant ThyssenKrupp, which has also joined the initiative and taken out over a billion in loans. In view of the crisis, “more direct investments in sustainable industrial projects” are now being offered, according to a spokesperson, who explained the company intends to invest in hydrogen.

So far, however, German state aid has flowed freely into all sectors with no conditions attached.

Upon request, the country’s economy ministry confirmed that the economic stimulus packages proposed to date have only been subject to the specifications of the state development bank KfW Bank and the general efficiency specifications within the framework of the energy efficiency support programmes.

The conditions of the economic stimulus package announced for early June are still in the works. “We cannot speculate about this at present,” the ministry said.

However, Finance Minister Olaf Scholz (SPD) is hinting at high investments in a climate-friendly future as “the guiding principle”. 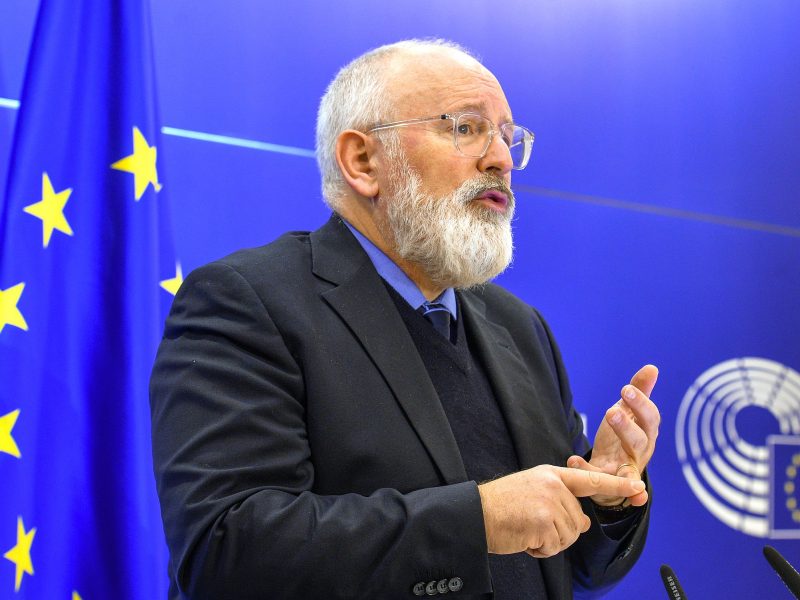 The Franco-Dutch airline Air France-KLM, which is 14%-owned by each government, is to receive €7 billion in state funding from the beginning of May. In return, according to France’s Economy Minister Bruno Le Maire, the group is to become “the most environmentally friendly airline in the world”.

In concrete terms, this means that domestic CO2 emissions must be slashed by 50% by 2024 compared to today, the share of alternative fuels must be increased to 2% by 2025, and domestic flights need to be reduced.

Even before, Austria had announced that Austrian Airlines, a subsidiary of Lufthansa, would have to accept similar conditions if it received the €767 million it had requested from the state.

Meanwhile, in Berlin, Economy Minister Peter Altmaier does not want to get involved in Lufthansa’s operative business, despite the airline hoping to soon conclude bailout talks with the government, which would then get a 25.1% stake in the company, according to reports from newspaper Der Spiegel.

Nevertheless, the government would not have any influence on the company’s decisions. “This has never proved to be a good idea in the past,” Altmaier said.

However, Environment Minister Svenja Schulze (SPD) told the Handelsblatt newspaper that state aid must be used in such a way that it “leads to a modern, ecologically sustainable corporate strategy in the long term”, in reference to the example of neighbouring countries.

Will there be a car purchase premium after all?

Germany’s powerful car industry has also long since made its voice heard. While the industry has not yet applied for state aid, its representatives have discussed a possible purchase premium for new cars together with the German government. Whether it will come – and whether it will also apply to petrol or diesel cars – has yet to be decided.

Economy Minister Altmaier is rather vague, saying that the measures must benefit everyone in Germany and the focus should be “on a contribution to modernisation in the direction of innovative vehicle technologies”.

Last week, on the TV programme “Hart aber Fair”, the minister said he was “not interested in supporting any kind of behaviour by the automobile industry.

An economy ministry spokeswoman also told EURACTIV they would prefer “not to speculate on the automobile industry”.