Arbitration mechanisms for resolving disputes between investors and states should be reformed and improved, MEPs said in 2015 when they voted on the draft EU-US trade deal, TTIP. [European Parliament / Flickr]

It is not uncommon for companies to sue governments. According to UN figures, 117 states worldwide are currently being dragged to court for allegedly putting private investments at risk.

As a result, governments often prefer watering down their planned environmental laws in order to ward off potential litigation.

France, for instance, softened its climate protection laws that meant to restrict natural gas and oil production following a threat of legal action by Canadian company Vermilion. The energy company Uniper is currently preparing a lawsuit against the Netherlands over the country’s planned withdrawal from coal. And since 2012, Vattenfall has been suing Germany for its nuclear phase-out, with compensation and legal costs amounting to more than €6 billion.

The right of investors to sue states is “poison for the fight against climate change,” says Bettina Müller, a trade officer at the Berlin-based NGO PowerShift.

Activists are not alone in this fight. Even the UN has its reservations on investor protection clauses, arguing they weaken laws designed to fight climate change.

In the summer of 2015, in the midst of negotiations over an EU-US trade pact, a group of United Nations experts wrote an open letter to the UN High Commissioner for Human Rights, to warn about the “chilling effects” of investor protection clauses contained in a draft EU-US trade pact known as TTIP.

“ISDS chapters are anomalous in that they provide protection for investors but not for States or for the population. They allow investors to sue States but not vice-versa,” the signatories wrote.

“There must be a just balance between the protection afforded to investors and the States’ responsibility to protect all persons under their jurisdiction,” the letter. This includes regulations on environmental protection, food security and access to generic and essential medicines, which could be affected negatively by trade deals that ensure legal protection for private investors.

“Arbitration tribunals should allow public review and its awards must be appealable before the International Court of Justice or a yet to be created an International Investment Court working transparently and with accountability,” they wrote.

It would be challenging to measure the extent to which threats of legal disputes have prompted governments to actually change draft legislative proposals. However, a UN report published in May showed that the number of lawsuits had risen sharply since the 1990s.

There are 983 such cases known worldwide, which means that the number has increased about tenfold since the turn of the millennium. Spain has 50 cases against it, coming second after Argentina. In the EU, the Czech Republic comes second after Spain, with 38 cases pending. 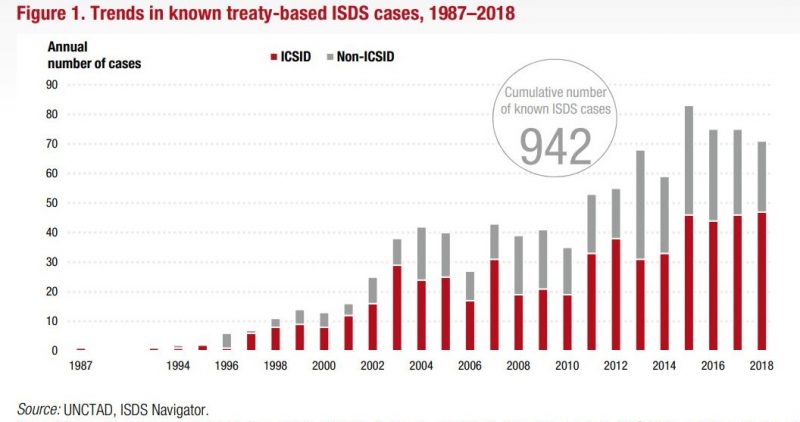 Lawsuits as a business for companies and hedge funds

These mechanisms allow investors to seek compensation in case their profits are restricted by sudden changes in national legislation. The cases are decided by a private arbitral tribunal composed of three judges appointed by the country and the company, equally.

However, this system has been criticised for years. The arbitrators are not neutral, and the negotiations are not made public. Above all, ISDS clauses are far too vaguely formulated, Müller says.

“The ISDS system gives investors exclusive rights to sue alongside national courts, to which others have no access. A state or someone whose human rights have been violated cannot rely on these arbitration courts,” Mueller told EURACTIV.

The increasing number of lawsuits shows that the system has long become a business for companies and hedge funds.

“The plaintiffs hope for massive profits. This is because, in proceedings, corporate groups not only demand reimbursement of their investments but often also compensation for unfulfilled profit expectations. And these can be far higher,” Mueller added.

In most cases, arbitration tribunals tend to rule in the interest of investors. Around 70% of the judgments in 2018 were in the interest of corporations, according to UN figures. In the last 30 years, an average of 23% of cases has been settled between by the two parties. According to Mueller, this would often mean that the state either compensated the company or weakened or even withdrew proposed legislation.

The EU plans to establish a permanent court for company lawsuits

The European Commission wants to set up its own Multilateral Investment Court (MIC) to make the system fairer. It has already presented a concept paper before the relevant UN body.

The proposed court would be a permanent and independent arbitration body that is not convened individually by plaintiffs, as is the case in the ISDS system. The EU’s free trade agreements with Canada, Vietnam, Singapore and Mexico already features the MIC’s predecessor model.

Outgoing EU Commissioner for trade, Cecilia Malmström, hopes that this will make the courts more independent.

“Only a permanent body of full-time experts can remove the potentially perverse incentives of the current system,” she said. The proposed MIC should also allow trade unions and NGOs to be consulted, something which is not currently the case.

But according to critics, this is far from enough. Since 2019, an alliance of 200 European organisations, trade unions and social movements have campaigned for the complete abolition of corporate action rights, also in the form of the MIC, under their call to action  entitled: “Protecting human rights – stopping corporate actions!”

According to the Alliance’s demand, companies should limit their actions to national courts that are accessible to everyone. According to Müller, the MIC does bring about selective improvements, but it “does not change the unjust and one-sided structure of the system.

So far, the MIC, as well as its previous model, only exist on paper. That is because all member states have not yet ratified the investment protection chapters in the new EU trade agreements.

But since the EU Council gave its green light in March last year, the proposal from Brussels and the reform of the ISDS system more generally continues to be debated before the UN.

In the meantime, lawsuits continue to pile up. In September, Germany was again ordered to appear before an arbitration court. This time, it was in a case against the Austrian construction and energy company Strabag, which is suing Germany for having made amendments to its Renewable Energy Sources Act.