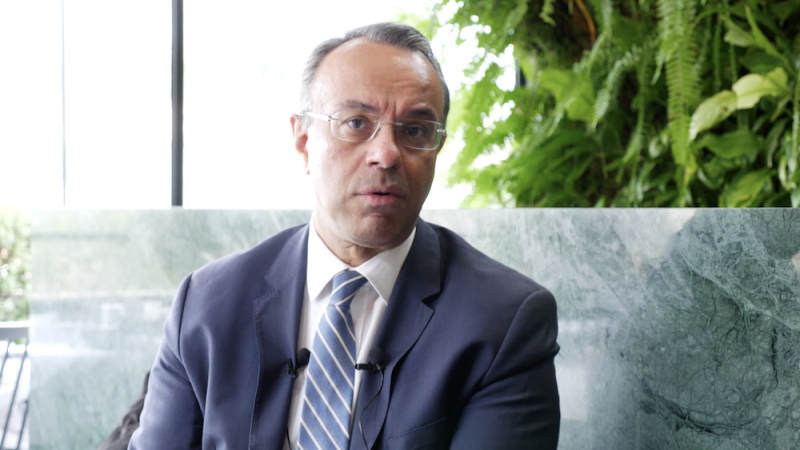 “Acquisitions, mergers, increasing businesses’ size is one of the pillars of the policy we will pursue in the Recovery Fund,” Staikouras said. [Photo by EURACTIV.gr]

The Greek government will incentivise small and medium-sized enterprises (SMEs) that are hard-hit by the pandemic to merge to ensure financing from the Recovery Fund, Greek finance minister Christos Staikouras told EURACTIV Greece in an exclusive interview.

“Acquisitions, mergers, increasing businesses’ size is one of the pillars of the policy we will pursue in the Recovery Fund,” Staikouras said.

Previously, Minister for Development Adonis Georgiadis triggered opposition after stating that if an SME wants to survive, it should “follow the rules of the modern economy”, for example, by merging. This will leave many of the country’s small companies faced with the choice of risking extinction or joining forces with another company to ensure survival.

Georgiadis stressed that loans from the Recovery Fund that will go through the banks would only be given to SMEs that have merged.

Approximately €1.5 billion in grants will be earmarked for Greek SMEs, but Athens has also activated the loans option, which other EU countries avoided in order to prevent increases to their public debt.

Greece’s economy chief admitted that the country has a lot of very small companies, which face difficulties in accessing bank financing and European tools.

“We, therefore, try to provide incentives so that through a larger size, they have easy access to the necessary funding,” he said.

“But in order not to increase the country’s debt, the loans should go to companies that have a high probability of repaying them,” he added.

The discussion over banks’ lending to Greek SMEs has been a long-standing one.

In early July, EURACTIV reported that several EU governments had asked the Greek government for clarifications regarding the selection of companies that will benefit from the post-pandemic recovery plan’s cheap loans.

A source familiar with the issue said the concern is that the Greek state would prioritise “safe” investments – which would have received money from the banks anyway – and not high-risk investments in sectors that suffered a severe blow during the pandemic.

The main opposition has reacted strongly to the government’s plans, saying SMEs will gradually go bankrupt.

Efi Achtsioglou, a lawmaker from the main opposition leftist Syriza party, told EURACTIV Greece that in fact, 90% of Greek companies in European terms are small and very small but they employ 80% of the workforce.

“In Greece, most small businesses do not have access to systemic banks. So, the money is spent among the same big companies, which in fact have no problem of survival. This plan will gradually lead them to extinction,” she said.

The leftist lawmaker added that SMEs are also excluded from future financing since, for the Recovery Fund, the financing will go through the systemic banks.

“What the government is doing has a very specific objective: the disappearance of SMEs and the survival of the few in order to further expand their market share,” she said.

Achtsioglou noted that the only solution is a debt reduction program, which will help SMEs survive amid another crisis related to rising prices.

According to the latest International Monetary Fund data, the Debt-to-GDP for Greece is 210%.

The figures have raised eyebrows in Athens, with many fearing another austerity push after the pandemic.

But Staikouras insisted that the country’s debt is sustainable.

“Greece has taken since 2012 successive moves to significantly improve the debt’s sustainability”, he said.

Asked about the fiscal situation after the pandemic, Staikouras said Europe and Greece would need “fiscal responsibility”.

“We will need fiscal balance but at the same time, we must always take into account the economic cycle, the conditions of the economy, the diversity of each economy, as well as the need to invest, and public investment in sectors such as digital transition and climate change, i.e. the green economy,” he concluded.