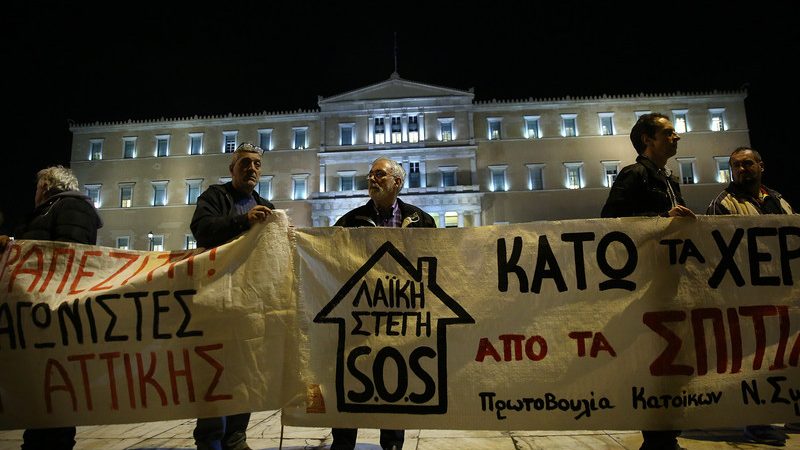 Protesters hold a banner as they take part in a demonstration against property auctions in central Athens, Greece, 21 February 2018 evening. [EPA/ORESTIS PANAGIOTOU]

Although the coronavirus pandemic has shaken the entire eurozone and Europe’s economic outlook seems uncertain, Greece’s international lenders do not seem prepared to make any fresh concessions to the country that is still recovering from years of austerity.

Greek media reported on Thursday (9 April) that the ‘Institutions’ [European Commission, European Central Bank, International Monetary Fund], which represent the country’s lenders, will not allow the conservative government in Athens to postpone the first auction of indebted households, which has been agreed on under the country’s international bailout.

A new bankruptcy regime will be in place in Greece from April, which would not protect”citizens’ first residence from being auctioned off because of unpaid mortgages.

The government asked to postpone the agreed measure because of the economic effects of the coronavirus pandemic.

However, according to Greek media, at a teleconference held on Wednesday, the lenders did not see why such a postponement should be approved.

Fotis Kourmousis, Special Secretary for Private Debt Management, said that after more than four hours of teleconference there was no agreement.

Following years of austerity, Greece exited its bailout programme in August 2018, but a number of reforms still need to be carried out. The conservative New Democracy party, which came to power last July, has set up an ambitious reform and investment agenda, but the coronavirus pandemic has put things on hold.

In the meantime, Europe’s south-north divide over the EU’s response to the economic implications of the pandemic has increased.

The Netherlands insists that the countries which will require EU aid to fight the coronavirus should receive a bailout with low conditionality during the crisis, but once the crisis is over should carry out reforms according to the provisions of a normal Greece-style ESM [European Stability Mechanism] bailout.

Rome and Madrid oppose such bailout proposals and push for minimal conditionality under an ESM bailout both now and in the long run.

The vast majority of eurozone countries have put heavy pressure on The Hague to show its willingness to make concessions. According to sources, the Netherlands may back down today when it comes to the long-term conditionality but not on the so-called coronabonds, a joint debt-issuance for the eurozone.

In a TV interview with MEGA TV channel, European Commission Vice-President Margaritas Schinas said that “few doubt that at the end of this process, there will be no conditionality as we knew it in the bailout times”.

He said Europe today faces a “symmetric exposure to risk and the answer should also be symmetric”.

“We definitely need a safety net, a fund, we will find the term to describe it, but basically what the finance ministers are now discussing is how to build a sufficient economic dimension through the European Stability Mechanism,” he added.