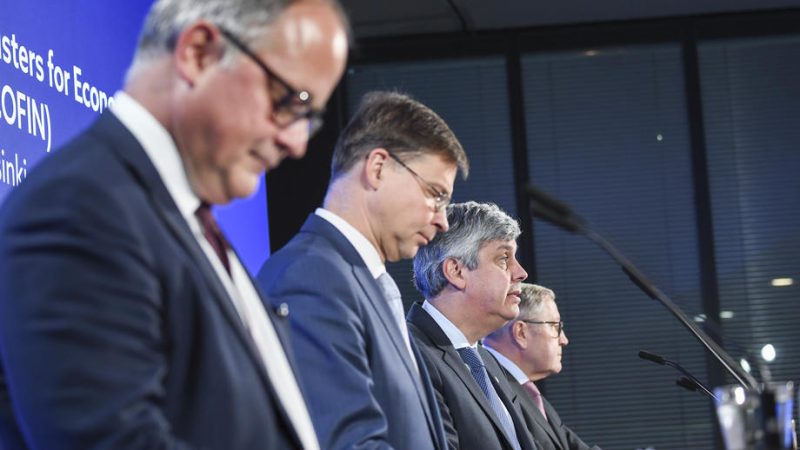 (L-R) Benoit Coeure, Member of the Executive Board of the European Central Bank, Valdis Dombrovskis, Executive Vice President-Designate of the European Commission, Eurogroup Mario Centeno President, and Klaus Regling, Managing Director of the European Stability Mechanism (ESM) during the press conference in an EU Informal Meeting of Ministers for Economic and Financial Affairs (ECOFIN) in the Finlandia Hall in Helsinki, Finland, 13 September 2019. [EPA-EFE/KIMMO BRANDT]

The European Commission and some member states including France and Italy have followed the ECB in pressing Germany and several other EU countries to invest more to counter the risk of recession.

For that reason, he called on the countries with fiscal space to invest billions in their economies.

The Commission’s call came after a plea made by ECB president Mario Draghi.

“It is high time for the fiscal policy to take charge,” Draghi said.

He told Germany and The Netherlands to activate their investment plans as soon as possible.

Draghi’s demand came against the backdrop of the worsening economic situation and the acknowledgment of the limits of his monetary arsenal, especially after he deployed a new package including more asset-buying rounds and cutting the deposit rate further.

Member states also told Berlin, The Hague and others with better fiscal situations to improve their infrastructure or spend more money on connectivity.

“I really think that it’s time now to decide and to have more investments, more growth more prosperity,” French Finance Minister, Bruno Le Maire, said on his way into the Eurogroup.

The horizon looks even gloomier, as the trade war could easily worsen and a disorderly Brexit could finally materialise as from 31 October.

Eurogroup President, Mario Centeno, said that “despite all the uncertainty looking, we remain positive about the euro area economy, which is still growing, albeit at a slower pace.”

Centeno, who is also Portuguese finance minister, said that “going forward, in the face of a downturn, we need to find a new balance and fiscal policy will surely play a part on this.”

“My message is quite clear: countries with fiscal space should use it to counter the slowdown of the economy, and this must be done for no reason of solidarity with others, but first and foremost for their own sake,” he explained.

One of the issues discussed during the finance ministers’ meeting on Friday was precisely the fiscal instrument to support ailing economies.

A group of countries led by The Netherlands succeeded in limiting the ambition of the so-called budgetary instrument for convergence and competitiveness (BICC).

In light of the troubling situation, the member of the ECB’s Executive Board, Benoit Coeure, stressed that ministers should reconsider adding a stabilisation dimension to the new fiscal instrument.

“We would have preferred the BICC with three big ‘Cs’, because a countercyclical feature would have been very useful, and it is not there,” he said.

This adds pressure on the national governments to deliver the fiscal stimulus “which now is needed,” he added.

The new instrument still could add a small countercyclical dimension. Finance ministers discussed the possibility of reducing the required national co-financing to the projects supported by the BICC, although the conditions have yet to be “agreed and clarified”, said Centeno.

The financing of the budgetary instrument still remains a tricky issue, and is currently regarded as a watered-down version of the eurozone budget French president Emmanuel Macron once defended.

In a small concession to France and other countries in favour of a more robust fiscal instrument, the Eurogroup accepted leaving the door open to add more funds in the future.

Centeno said there was “broad support” to include an enabling clause in the BICC legislation to foresee the possibility of such additional revenues beyond the EU budget, “without prejudging an agreement on the actual intergovernmental agreement” needed for the addition.