Polish prime minister Mateusz Morawiecki (R) and Hungarian prime minister Viktor Orban (L) during a greeting ceremony in the courtyard of the Royal Castle in Warsaw's Old Town on 1 May 2019. [EPA-EFE/MARCIN OBARA / POLAND OUT]

The veto – which could still be overcome at the level of EU27 national leaders – further complicates the arrival of the badly needed EU funds in hard-hit countries like Spain or Italy, at a time when the pandemic continues to spread across Europe and the reinstalled restrictive measures are hampering the recovery.

The 27 EU ambassadors (Coreper) met on Monday (16 November) to approve a series of compromises reached between the European Parliament negotiators and the German presidency of the Council representing the member states.

It included the multi-annual financial framework (MFF), the EU’s seven-year budget of almost 1.1 trillion, and the €750 billion recovery fund to tackle the worst recession in EU’s history caused by the COVID-19 pandemic.

The package also included the new rule of law mechanism, which would allow for the suspension of EU funds in case of mishandling European money or breaching EU principles.

In spite of Hungary and Poland’s opposition to the mechanism, the rule of law conditionality was approved by the required qualified majority in the Council.

In retaliation, Budapest and Warsaw blocked the MFF and the recovery fund on Monday, given that the unanimity was needed in both cases through the so-called own resources decision.

Their veto will be discussed at a meeting of EU European affairs ministers on Tuesday and then at a video-summit of EU leaders on Thursday.

A spokesperson of the Germany presidency said on Twitter the EU ambassadors had failed to reach “the necessary unanimity for initiating the written procedure due to reservations expressed by two member states.”

In addition, the own resources procedure must be completed by the ratification in all the member states, mostly through their national parliaments, which will further prolong the approval process at least until next spring. The bulk of the EU recovery funds is not expected until the second half of 2021. 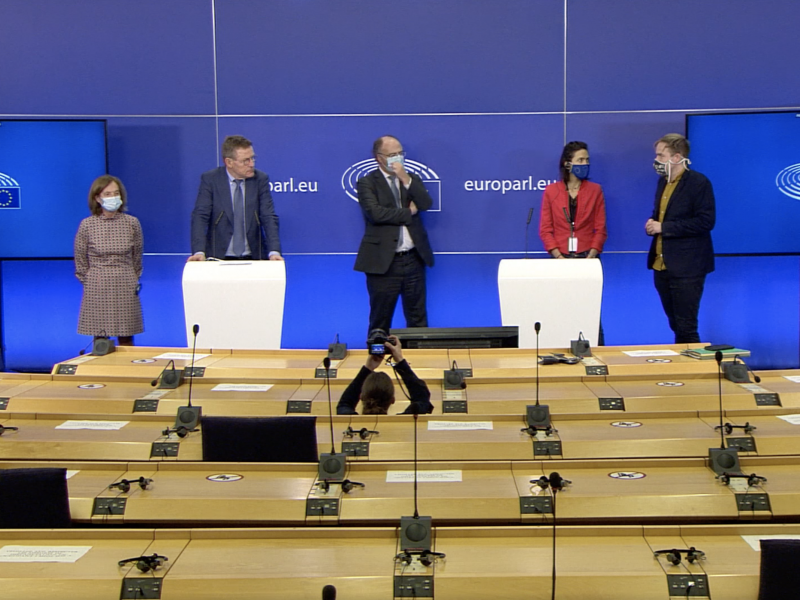 The European Parliament and Council reached a final deal on the EU’s next seven-year budget, worth €1.0743 trillion, on Tuesday (10 November), agreeing to add an additional €16 billion to the budget, mostly for health and education and introduce a roadmap for new European levies and biodiversity targets.

The EU’s long-term budget compromise was also blocked in the Coreper. A German spokesperson said that two member states “expressed reservations with regard to their opposition to one element of the overall package”, in a reference to the Rule of Law mechanism, “but not to the substance of the MFF agreement”.

In an earlier letter sent to the Commission, Hungary and Poland had threatened to block the approval process of the MFF and the recovery fund if the rule of law mechanism was approved, as they considered it an encroachment on their “national sovereignty”.

The Hungarian government spokesperson, Zoltan Kovacs, explained their veto by saying that the rule of law compromise “runs contrary to the July Council conclusions”, referring to the summit where EU27 leaders agreed the budget.

During the negotiations with the European Parliament, this conditionality included more cases under which EU funds could be suspended, such as endangering the independence of the judiciary, and a preventive orientation, which sparked the criticism of Hungary and Poland.

“The question is whether Poland… will be subject to political and institutionalised enslavement,” Polish Justice Minister Zbigniew Ziobro said on Monday.

The impact of the second wave of the pandemic has forced the European Commission to cut its growth forecast for next year.

“We are back in a crisis”, a senior EU official said commenting on Budapest and Warsaw’s expected veto.

The Commissioner for Budget, Johannes Hahn, expressed his disappointment with the outcome of the Coreper meeting

He urged member states to “assume political responsibility” and take the necessary steps to pass the EU budget package.

“This is not about ideologies but about help for our citizens in the worst crisis since World War II, he said.

It remains to be seen how the veto of these two countries could be overcome, given that the Council already endorsed the rule of law mechanism.

The Commission considers that it is the German presidency’s role to find a way out of this standoff, but it may require the intervention of EU leaders, who are meeting online on Thursday to discuss Brexit, the state of play of the pandemic, and their efforts to fight against the virus.

Meanwhile, the German presidency and the Parliament negotiators are discussing the details of the €672 billion Recovery and Resilience Facility, the main pillar of the recovery fund and the outstanding piece in the negotiation of the EU budget.