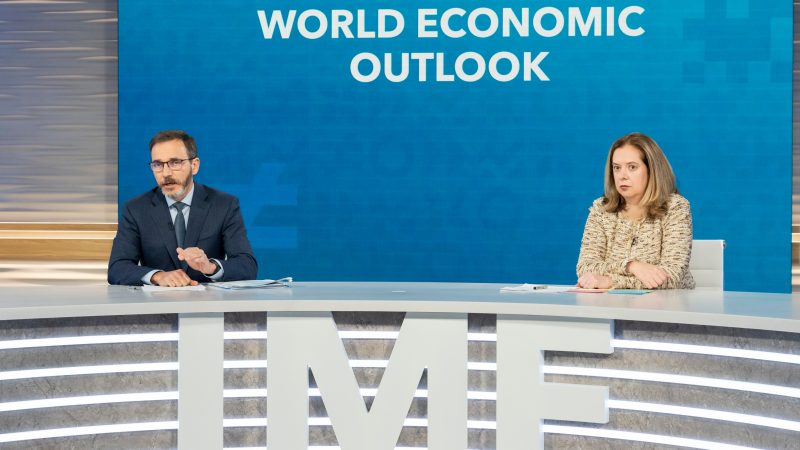 The war in Ukraine will weigh heavily upon economic growth in the eurozone, the IMF said Tuesday (19 April), as the conflict wreaks havoc on energy prices and the manufacturing sector.

The International Monetary Fund revised down its eurozone growth forecast for 2022 to 2.8% from 3.9% in its January estimate, with the region’s biggest economy, Germany, taking a heavy hit.

“The main channel through which the war in Ukraine and sanctions on Russia affect the euro area economy is rising global energy prices and energy security,” the IMF said in its World Economic Outlook report.

The war has hurt some countries like Italy and Germany more than other European nations because they had “relatively large manufacturing sectors and greater dependence on energy imports from Russia”, the IMF said.

After Moscow’s invasion in February, the West, including eurozone countries, imposed sanctions on Russia’s financial system, aviation sector and other major parts of the economy.

Nearly two months later, prices are rising. Oil remains above $100 a barrel after reaching historic highs in March, while the price of gas, wheat, aluminium, nickel and other raw materials have soared.

As a result, consumer price inflation in the eurozone has surged to 7.5%, an all-time high.

Pierre-Olivier Gourinchas, the IMF’s chief economist, said the forecast calls for a slowdown but no recession in the eurozone.

The main risk to the outlook is an escalation of sanctions, in particular an embargo on Russian gas, which would cause a “quite severe” slowdown over the short term in countries like Germany that depend most on those imports, Gourinchas told AFP in an interview in Washington.

As a result, “we would have a fairly significant downward revision of the economic forecasts for the euro zone.”

If domestic consumption and confidence decline, that could also slow growth, which would put the European Central Bank in a “tricky situation.”

The ECB last month slashed its growth forecast as well, and warned inflation will soar in the eurozone area, but it has yet to follow the US Federal Reserve in raising interest rates to tame prices.

Gourinchas said, “For now, given the slowdown and the fact that inflation is concentrated in certain sectors… it is not necessary to start tightening monetary policy very quickly.”

The drag from the war in Ukraine comes as the eurozone economy was set to fully recover from the pummelling it took from the pandemic in 2020.

The IMF had predicted last October that eurozone growth would be 4.3% in 2022 before lowering the forecast in January due to a global supply chain crisis and the emergence of the Omicron variant of the coronavirus.

The IMF’s latest report also lowered the eurozone’s growth outlook for 2023 to 2.3%, down from 2.5% previously.

But it slightly increased its forecast for Germany to 2.7% next year. Italy’s growth, however, will slow further to 1.7%.