IMF Managing Director Christine Lagarde and the actress Cate Blanchett, who was Christal Awards honored for her action with refugees in the World Economic Forum in Davos (Switzerland) on Monday. [WEF]

But the International Monetary Fund (IMF) has warned that the next crisis will hit sooner and harder that we thought.

“In seed time learn, in harvest teach, in winter enjoy,” said IMF Managing Director Christine Lagarde, issuing a warning by quoting British poet William Blake to describe the state of mind of businessmen and politicians in the world.

But “complacency is one of the risks we should go against”, Lagarde told reporters in Davos hours before the official opening of the WEF.

The economy is growing but not because countries have lifted their growth potential via investment in human capital or technology. Instead, reforms have been elusive and growth has benefited just the few that are on top of the pile.

The Brief – Money on our minds

Does money influence the way we think and act, even unconsciously? Nobel laureate Daniel Kahneman believes so and few places on Earth contain more reminders of money and power than the World Economic Forum (WEF) in Davos.

“We are not satisfied,” Lagarde insisted, because “too many people have been left out of the acceleration of growth”.

Against the backdrop of fragile growth and outstanding challenges, including a high level of debt, the Fund’s chief economist, Maurice Obstfeld, stressed that “the next recession will come sooner and will be harder to fight”.

He warned political leaders that the economic momentum is due to factors that are “unlikely to last for long”, including the monetary stimulus and supportive fiscal stance.

Obstfeld welcomed that an important number of European countries have implemented “important” structural reforms since the 2007/8 crisis, including Spain and Italy, while French President Emmanuel Macron promised “quite ambitious measures”.

Looking at the eurozone reform, he said that the completion of the banking union, with an European Deposit Insurance Scheme would represent a step forward, as it would be also the case of completing the economic and monetary union with a fiscal capacity.

Growing inequality and persistent uncertainty and instability on the planet will be overarching concerns at this year’s forum.

The incapability of traditional parties to better distribute economic gains led to the rise of anti-establishment parties and populist forces across the world. Donald Trump won the elections in the US appealing to those ‘left behind’ by globalisation.

But “a turn to more nationalistic or authoritarian governance models, however, could result in stalled economic reforms at home and a withdrawal from cross-border economic integration,” warned the IMF days before Trump’s arrival to Davos.

It is unclear even for business leaders how the buoyant economic situation has helped their societies.

According to a global survey presented on Monday by consultancy firm PwC in Davos, 46% of CEOs of around 1,300 companies consulted believe that the world is registering a concentrated economic growth benefiting only a few people, while 48% described the economic growth as widespread.

The global president of PwC, Bob Moritz, told reporters that, regardless of what side they are on, CEOs are starting to become aware of the problem and “they are ready to take action”.

But despite persistent inequality and social unrest, the sense of urgency to act decreases as the world economy, in particular advanced economies, continues to improve gross domestic product (GDP) outlooks for the upcoming years.

A total of 57% of company presidents interviewed were confident about the global economy for this year, 28 points more than in 2017.

The failure of GDP

For that reason, the WEF recommended on Monday to start looking at the economy in a different manner, to include indicators to measure not only what economies generate, but also the distribution of wealth and income, life expectancy, productivity, debt levels or unemployment levels.

“Decades of prioritising economic growth over social equity has led to historically high levels of wealth and income inequality and caused governments to miss out on a virtuous circle in which growth is strengthened by being shared more widely and generated without unduly straining the environment or burdening future generations,” according to Forum experts.

In a report published on Monday, the WEF blamed economists and policy makers for their “excessive reliance” on GDP.

CEOs surveyed by PwC agreed that financial indicators are not enough to create a true picture of the economic situation.

Financial indicators “cannot be the only measure of success in a globalised economy. Other, broader measures, reflecting target outcomes in societal terms, must also be considered,” said Moritz. 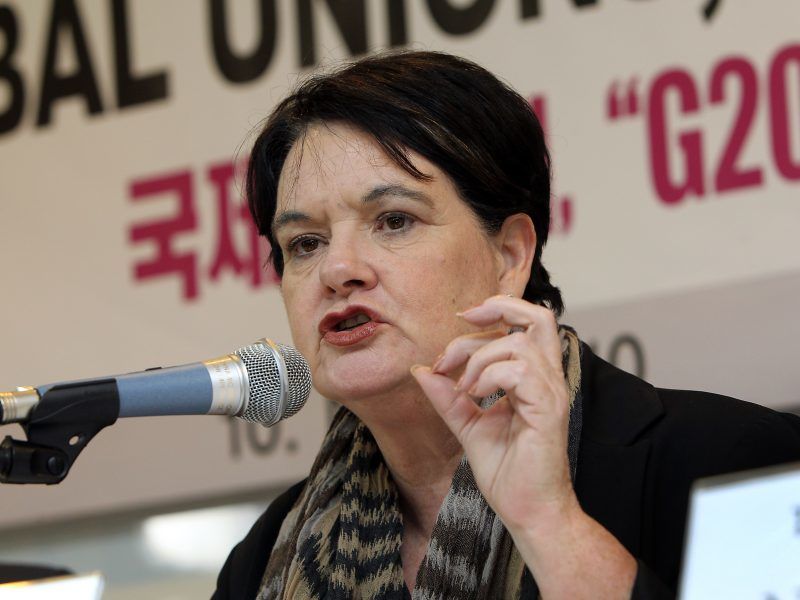 In an increasingly fractured world, change will not happen if the current model of corporate greed continues to dominate the future, 2018 World Economic Forum co-chair Sharan Burrow told EURACTIV in an exclusive interview.

Obstfeld admitted that economists have struggled to measure wealth distribution. But he argued that GDP should remain as an “anchor”, completed by other indicators to reflect societal aspects or the environmental costs of productions.

“It is not possible to produce one single number to summarise people’s happiness,” he said.

Between 23 and 26 January, the Swiss mountain village of Davos hosted the 48th World Economic Forum Annual Meeting. The programme, initiatives and projects of this year's meeting focused on the theme Creating a Shared Future in a Fractured World. EURACTIV's editor-in-chief Daniela Vincenti and business editor Jorge Valero reported extensively from Davos.