Italian Premier Giuseppe Conte (R) on a mobile phone as he waits for Libyan Prime Minister Fayez al-Sarraj's arrival before their meeting at Palazzo Chigi, Rome, Italy, 7 May 2019. [{Riccardo Antimiani/EPA/EFE]

Italy accused EU authorities of prejudice on Tuesday (7 May) after they forecast the eurozone’s third largest economy would stagnate this year and its huge public debt would rise further.

The European Commission cut its growth prediction for Italy and said its public finances would deteriorate further, in an assessment that could reignite a dispute with Rome over its budget after the two sides reached an uneasy compromise in December. 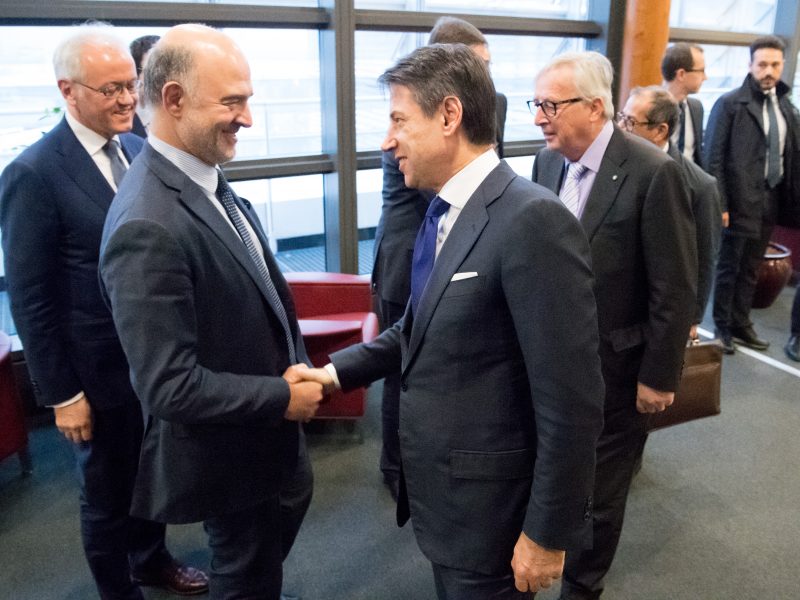 It is an overstatement to claim that Italy’s debt constitutes a risk for global markets, but a zero-growth rate can only worsen Rome’s problems, European Commission President Jean-Claude Juncker said in an interview with state broadcaster RAI on Sunday (31 March).

Italian Prime Minister Giuseppe Conte said the forecasts were ungenerous and “prejudiced,” because they assumed Italy would post no further growth this year after it emerged from recession with a stronger-than-expected first quarter.

Brussels marginally cut its 2019 growth outlook for Italy to 0.1% from an already gloomy 0.2%.

The commission also forecast growth in the wider euro zone economy to slow more than previously estimated, to 1.2%.

But its prediction for Italy is the lowest in the bloc, and the Commission said it expected that to weigh on debt and deficit, which were both seen climbing above levels previously agreed with Brussels.

The Commission’s forecasts were drawn up before data showed Italy posted first quarter growth of 0.2%, and the government says its policies to raise welfare benefits will support domestic demand.

Conte told reporters in Milan he expected “solid growth” in the second half of the year.

Rome has forecast growth of 0.2% this year and 0.8% in 2020, 0.1 percentage points above the Commission for each year, but after the first quarter data Economy Minister Giovanni Tria said he thought this year’s target could be exceeded.

Tria told reporters in Paris the Commission’s public finance projections for next year were “more political than economic”, because they took no account of the government’s commitments to reduce the deficit in its 2020 budget.

Although no EU decision over possible disciplinary moves is expected before European elections on 23-26 May, the more downbeat estimates could increase market pressure on a coalition government in Rome already plagued by infighting.

The EU warned Sunday (24 March) of a new row brewing with Italy over its budget, barely a few months after both sides agreed on a hard-fought deal with Rome’s disputed 2019 finances.

Milan shares fell after the Commission’s forecasts were published and the yield gap widened between Italian government bonds and safer German Bunds.

The Commission – which came close to penalising Italy over an excessive deficit target before the agreement in December – will assess states’ compliance with EU rules at the beginning of June, economics commissioner Pierre Moscovici said.

Without policy changes, Italy’s deficit would be 2.5% of gross domestic product (GDP) this year, the commission said, lowering a 2.9% forecast it made in November. The bloc’s executive forecast the deficit would climb to 3.5% in 2020, beyond the EU’s 3.0% ceiling.

Eurozone countries with a debt rate above 60% are required to gradually reduce it. But Italy’s has been growing since last year, when it cost 3.7% of economic output to service.

With Italian bond yields having dropped slightly after December’s budget deal with Brussels, interest expenditure is forecast to drop to 3.6% of GDP this year, before rising again in 2020.

The structural deficit, which excludes one-off items and the effects of the business cycle, is also expected to worsen. This indicator is crucial in the EU assessment over countries’ compliance with fiscal rules. The primary surplus, which excludes interest payments, is expected to ease.

Italy is the only eurozone country in which the commission expects employment to fall this year, by 0.1%, even though the first quarter showed firm job growth. Brussels also singled out Italy as the only state where investments will fall, by an estimated 0.3%.