The Italian output will fall by 11.2% this year, while the Spanish economy will decline by 10.9%. France will be the third-worst performer with a 10.6% contraction in 2020. In May, their economies were expected to fall by 9.5% (Italy), 9.4% (Spain) and 8.2% (France). These countries are the three biggest EU economies, after Germany.

The recession will be also deeper this year for Europe as a whole than initially expected in May, when the Commission first took into account the impact of the coronavirus in its economic forecast.

In the case of the euro area, the Commission expects a decline of 8.7% of its GDP, one point higher than the spring forecast. It also revised slightly downwards the GDP growth expected for next year to 6.1%

The Commissioner for Economy, Paolo Gentiloni, told reporters on Tuesday that the uncertainty surrounding the European economy is high and numerous risks remain.

Among them, he mentioned the possibility of new coronavirus outbreaks, a more severe downturn in the labour market, widespread insolvencies among businesses, renewed financial market turbulence and an unsuccessful result of the EU-UK post-Brexit trade talks.

Given the severe recession, Gentiloni said that the case for the fiscal stimulus proposed by the Commission to relaunch the economy is stronger than ever, as it would help to improve the outlook and bring back confidence to businesses, households and investors.

EU leaders will try to reach an agreement on the proposed €750 billion recovery fund and the EU’s seven-year budget at a summit on 17-18 July.

The negotiations will be difficult, as member states continue to disagree over the size of the fund, the portion of non-reimbursable grants, the conditionality to access the money and the distribution criteria to allocate the resources. 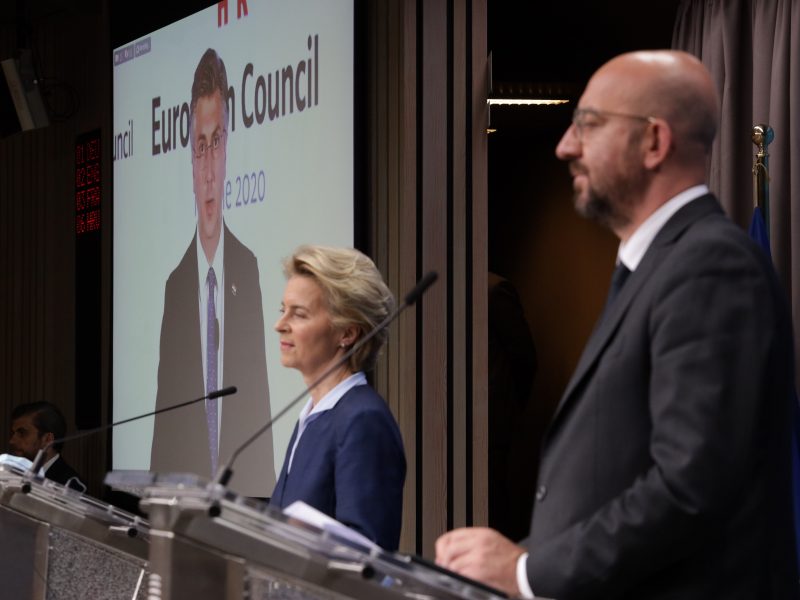 The Commission’s allocation key was questioned by a large group of countries, given that it was based on employment figures from past years.

As a result, Italy and Spain would be the main beneficiaries of the EU stimulus. Poland would be also among the top winners, although its GDP contraction this year (4.6%) will be much smaller than the EU average.

Gentiloni said the leaders would discuss the allocation key taking into account the latest economic forecast, but stressed that the Commission’s distribution proposal was “good”.

Gentiloni also expected another “very important discussion” after the summer break on the Stability and Growth Pact, the EU’s fiscal rules.

The Commission had launched a review of the EU’s deficit and debt thresholds only a few weeks before it suspended the fiscal rules due to the pandemic.

The EU executive will have to decide over the next months when the Pact should be reactivated, but some are already calling for new rules. The European Fiscal Board proposed getting rid of the “unrealistic” debt limit of 60% of GDP.

Against this backdrop, Gentiloni highlighted the importance of the discussion on the Stability and Growth Pact because it “will probably shape the economic policy for the years to come”.

On the reactivation of the rules, he recalled that the ‘escape clause’ is granted as long as there is a “severe economic downturn” in Europe.

The European Fiscal Board made “a good point” by saying that not only the growth figure in 2021 should be considered to decide whether the deficit and debt limits are back, but also how big the contraction was compared with the pre-coronavirus crisis levels, Gentiloni added.

“We have to honestly say that we don’t have previous experiences to refer to. We only know, and this was a very clear point in the European Fiscal Board report, that we have to avoid a double-dip recession”, Gentiloni stressed, referring to what had happened in 2012 due to the excess of austerity.

One response to “Italy, Spain and France worst performers as recession deepens”