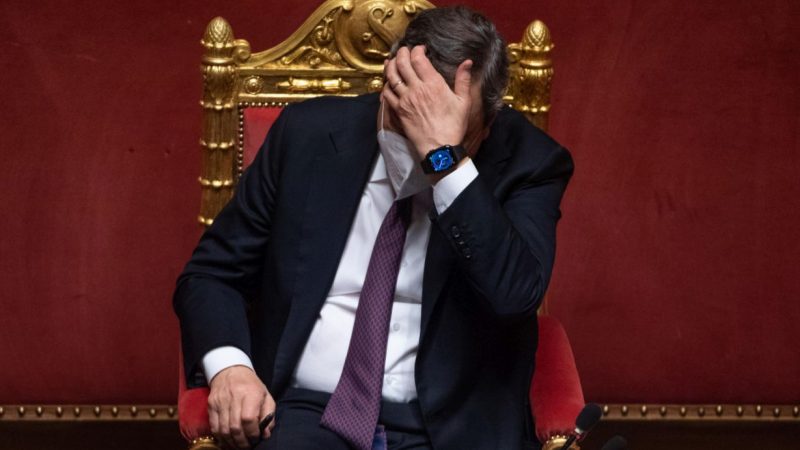 Italian Prime Minister Mario Draghi during the debate on Recovery Plan at the Senate in Rome, Italy, 27 April 2021. [EPA-EFE/MAURIZIO BRAMBATTI]

A draft decree from the Italian government that would accelerate public works in line with rules for claiming European Union pandemic recovery funds has prompted strike threats from trade unions and raised dissent within the ruling coalition.

Rome’s Recovery Plan, submitted to Brussels last month, included a pledge to pass legislation by 20 May to simplify bureaucratic procedures – the first of a raft of reforms needed to unlock more than 200 billion euros in grants and cheap loans.

The deadline has been pushed back to the end of the month but a draft of the so-called Simplification Decree circulated by Mario Draghi’s government has received a hostile reaction.

The unions and the co-ruling Democratic Party say it will reduce safety at work, increase illegality and could put at risk Italy’s landscape and artistic heritage.

A main point of contention is a measure making it easier for firms that win public tenders to issue sub-contracts to carry out the projects, reducing the legal responsibilities of the main contractor. Unions say this will lead to lower wages and exploitation of workers.

“What the government is doing is indecent,” said Maurizio Landini, head of the largest trade union confederation, the CGIL. “If it doesn’t change tack we will consider all forms of protest, none excluded,” he told la Repubblica daily, threatening co-ordinated strikes with Italy’s other main unions.

The government has said it is willing to address concerns about the draft before its final approval.

Paola De Micheli, a former infrastructure minister from the co-ruling Democratic Party, warned deregulating public works would “open cracks that the mafia will get into”.

Italy has passed numerous laws over the years aimed at streamlining its tortuous bureaucracy – but with little tangible effect. The previous government under Giuseppe Conte adopted a simplification decree less than a year ago, calling it “the mother of all reforms”.

The promise of the Recovery Fund cash means this time the stakes are higher to find a compromise between simplifying procedures and avoiding unacceptable shortcuts.

Culture Minister Dario Franceschini, also of the Democratic Party, has raised his own concerns over the 45-page draft of the simplification decree, saying Italy’s landscape and artistic heritage cannot be put at risk for the sake of streamlining procedures.

He said his ministry will help accelerate approval of priority projects in Italy’s Recovery Plan, including 5G communications technology and renewable energy plants “but we cannot dismantle safeguards”.