Only two Audi A8L have been registered in Latvia, including one for the central bank governor. [Volha-Hanna Kanashyt/Shutterstock]

Having been put under investigation for corruption at the end of June, the governor of Latvia’s central bank is the third member of the ECB governing council to have been implicated in murky deals over the past year. EURACTIV France reports.

We will never know whether it was the luxurious Bang & Olufsen stereo system, the seats’ massage feature or the flashiness of the car which made the governors of the ECB raise their eyebrows. Nevertheless, on a visit to Riga last June, some of them were not particularly impressed with being driven in a state-of-the-art Audi A8L belonging to the central bank of Latvia.

In a country where the average wage remains at around €900 a month and the governor of the central bank, Ilmars Rimsevics, the primary user of the aforementioned Audi, has been put under investigation, this carriage was arousing suspicion. The car, which was bought on a lease a year ago, was put up for sale for €78,000 in mid-August.

This is another surreal incident which is not surprising even to the Latvians any more as there has been an increase in cheap shots and the boldest of accusations among the political class in the run-up to the parliamentary elections in October.

“It’s hardly surprising here,” asserted a taxi driver in Riga. According to a Eurobarometer conducted in October last year, 84% of the population believes that the country is corrupt.

The Court of Justice disavows the ECB

On the other hand, the Latvian incident is extremely embarrassing for the ECB. Initially, the institution supported the governor of the central bank of Latvia, who had been removed from his post by the country following accusations of bribery.

The ECB then filed a complaint against Latvia to the Court of Justice of the European Union. In court, the ECB’s lawyer advocated that Mr Rimsevics regain his powers. In late July, the Court dismissed the ECB’s claim while adopting a strange conclusion: asking the suspect governor to name his successor.

“We are not taking sides, we simply want the governing council to function properly,” Mario Draghi put forward during a press conference in mid-June. The institution is particularly concerned that in crisis situations, when decisions have to be taken urgently by teleconference, the quorum will not be achieved.

If there is a single photo missing on the official group photo this means that two positions will be vacant at the governing council: there are only 19, for a quorum of 14.

This is because the Latvian governor is refusing to name a replacement without having a detailed knowledge of the situation and is therefore demanding to regain his duties at the Latvian bank, which leaves the Latvian government facing a dilemma: either to act illegally with respect to the ruling of the Court of Justice of the European Union, or to suspend the restrictions on movement and function imposed on Rimsevics by the anti-corruption bureau since March.

This is the first time in 13 years that the institution, which in the meantime earned high praise for its management of the 2008 crisis, has found itself in turmoil.

In 2005, Antonio Fazio, the then governor of the Bank of Italy, resigned following many months of rumours. He was then sentenced to four years in prison for corruption. Mario Draghi, who has to step aside in 2019, was his replacement.

The Slovenian governor has been subjected to pressure by his government. Having been questioned by the police, Boštjan Jazbec was then surprised to see his computer disappear while some people were criticizing him for his management of the financial crisis in 2008.

However, it was his strange inability to leave the country which startled the ECB. In 2017, the banker was blocked in Skopje when he needed to join a meeting of the governing council in Frankfurt. The ECB therefore had to ask the Slovenian government to let the governor do his job.

But when the latter received death threats this winter, Frankfurt decided to exfiltrate him: a position was found for him within the Single Resolution Board (SRB), which he joined in late March, without any further explanation. His position in Slovenia is now vacant.

In 2017, the Greek governor Yannis Stournaras was also called into question in a corruption scandal by the pharmaceutical sector involving several politicians. While the Greek governor regularly receives the support of Mario Draghi, who assures him all of his “respect”, Rimsevics, the Latvian central bank governor, does not.

A delicate trade-off between independence and potential corruption

“It’s a delicate situation because of the governors’ need for independence. Slovenia has clearly exerted pressure to make its governor resign and that is unacceptable. The charges against the Latvian governor seem to be overwhelming, of course. But if we accept that the courts can suspend a governor, as has happened in Latvia, this opens the way for other pressures,” acknowledged a source close to the ECB.

Draghi did not answer the questions asked by the MEP Pervenche Berès at the European Parliament on 9 July. “Were you aware of aspects of Mr Rimsevics’ possible corruption before the scandal broke? What can be done preventively in view of this kind of situation?” he was asked by the French elected representative.

“In general, the ECB attaches great importance to the proper conduct of the members of the governing council. In order to maintain confidence, it is essential to be beyond reproach,” side-stepped the ECB president, refusing to answer, as he had done in Riga before. The ECB also refused to give any interviews on the subject.

Nevertheless, the institution had been alerted to the recurring problems in Latvia. And it preferred to look the other way. 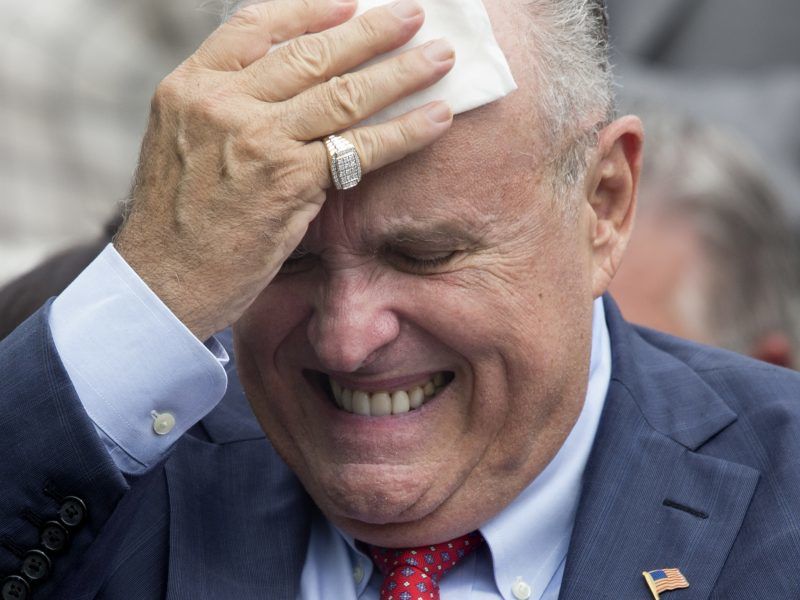 US President Donald Trump’s lawyer, Rudy Giuliani, has written a letter to Romania’s president, accusing the Eastern European country’s anticorruption efforts of going too far and calling for amnesty for those already prosecuted and convicted.

One response to “Latvia: The governor’s corruption undermines the ECB”