French President Emmanuel Macron promised on his way into his first European Council summit to fight for a “Europe that protects”.

As he insisted during his campaign, trade policy is an important part of his strategy. He echoed the concerns of French voters about globalisation, seen as the cause for the closure of factories in the country.

While European companies only have restricted access to foreign markets, companies in the EU are being bought out by foreign ones, in particular by Chinese firms.

Macron’s call was supported by his largest partners in the bloc. France, Germany and Italy sent a letter last February calling for greater EU powers to monitor and block third country takeovers, if necessary.

But a majority of EU leaders succeeded today in watering down the attempt to limit investment from overseas. 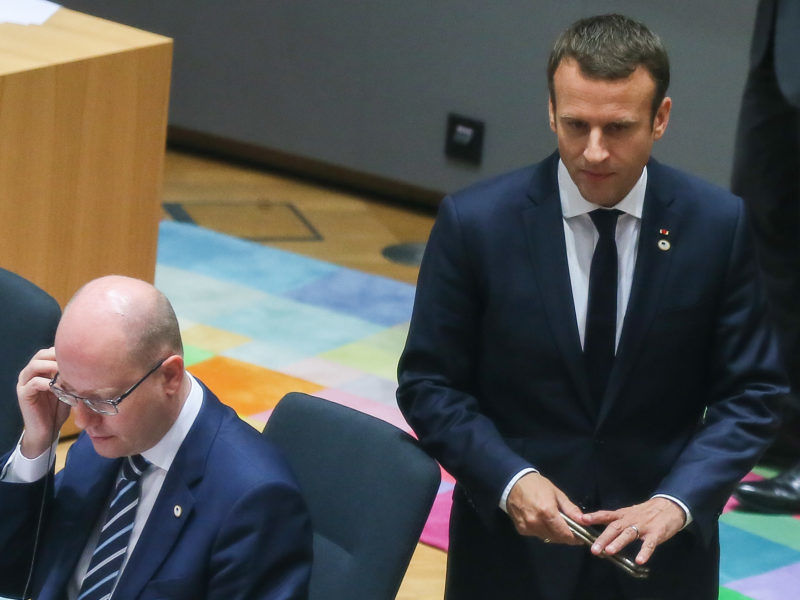 The summit conclusions welcomed the European Commission’s proposal “to analyse investments from third countries in strategic sectors, while fully respecting member states’ competences”. The executive suggested this idea in its recent reflection paper on harnessing globalisation.

The final wording is not only far from the letter’s intention to set up a EU mechanism to veto third country buyouts. It also toned down a previous draft where the leaders invited the Commission to “examine the need and ways to screen investment from third countries in strategic sectors”.

The final text represented a blow to Macron in his European Council debut. An EU official described an “interesting and lively discussion” in which a group of countries expressed opposition to his plan.

These countries included Portugal, Spain, Greece and the Nordic nations.

Macron’s ambitions were put into context, the official added.

The opponents were wary of sending the wrong signal precisely when Europe badly needs investment.

Besides, they argue that the protection of strategic sectors must come from member states, as they are defined according to national circumstances.

A dozen member states are already contemplating the possibility of blocking foreign takeovers in critical sectors like defence, or when the public interest is at stake.

“We have to make sure that fair competition is respected and it is not the law of the jungle”, Macron told reporters after the summit.

He said that Europe remains “very much in favour” of open markets but that does not mean “we will be naïve”.

On a more general note, Merkel said that “we want to change the EU in such a way that it is capable of being resilient toward globalisation”.

A majority of EU officials and member states reject the extreme option of a EU mechanism to veto third country takeovers.

“I am going to defend free trade because it is good for people,” Spanish Prime Minister Mariano Rajoy said.

He told reporters after the summit that “he did not hear anything” about giving veto powers to Brussels during the summit, and he added that the proponents have to explain “in great detail” what this EU mechanism means.

Sources revealed that Commission President Jean-Claude Juncker is expected to outline what could and should be done at EU level in the field of foreign investment during the State of the European Union address in September.

The EU executive is currently discussing internally what European layer could be added to national competences.

Officials said that Europe could play a role if internal market competition is threatened.