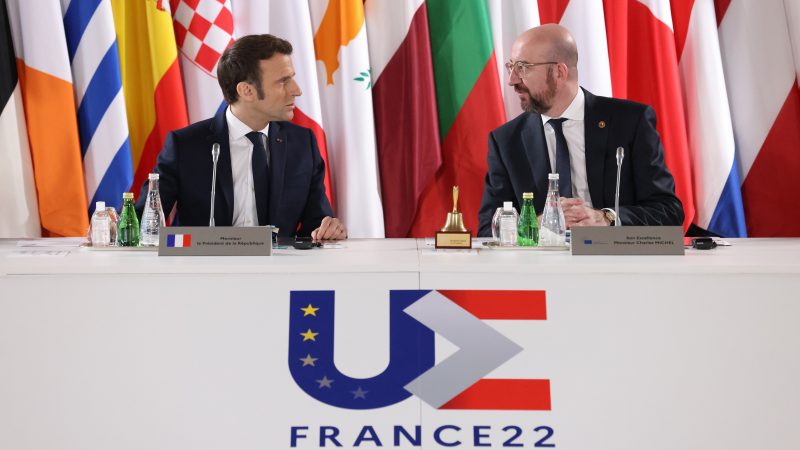 French President Emmanuel Macron and Council President Charles Michel at the Versailles summit on 10 March 2022. France holds the rotating Presidency of the Council of the EU.

French President Emmanuel Macron said on Thursday (10 March) the war in Ukraine will require joint EU investments which may lead to a new bout of joint debt, but added he would prefer to talk about the goals first rather than what is needed to get there.

The war in Ukraine and massive sanctions against Russia have triggered a contraction in global trade and sent food and energy prices sharply higher, and will force the International Monetary Fund to lower its global growth forecast next month, the IMF has said.

The EU will be hit due to its proximity to Russia, the many European companies indirectly hit by Western sanctions and Russian counter-sanctions, and the bloc’s dependence on Russian fossil fuels

Some countries such as France and Italy want new jointly-issued EU debt to help cushion the shift from Russian energy imports, the impact of sanctions imposed on Moscow and the push for more independence from global food and microchip suppliers.

But Germany, the Netherlands and others strongly oppose such a move, saying there is plenty of still unused money in the EU’s €800 billion pandemic recovery fund that the bloc is already jointly borrowing.

Asked whether EU leaders would launch a second EU recovery fund, Macron said he’d rather talk about the goals first rather than the tools to reach them.

“That’s always been my way of doing things. It helps lift taboos and blockages,” he told reporters ahead of an EU summit at the Palace of Versailles near Paris which he is hosting. France holds the rotating Presidency of the Council of the EU during the first half of 2022.

Macron had to win over former German Chancellor Angela Merkel and the so-called ‘Frugals’ group of fiscally conservative EU countries in 2020 to launch the first EU recovery fund and its unprecedented joint debt package.

The ‘Frugals’ is the nickname of an informal group of like-minded fiscally conservative European countries, including Austria, Denmark, the Netherlands and Sweden.

“We will need a strategy for joint European investments. We’ve started that with the recovery plan of the summer of 2020. It’s still useable in parts, by the way,” Macron added.

“But depending on the goals we set ourselves, we’ll need to decide whether to transform it, take new decisions. I don’t want to preempt it,” he said.

However, Macron said EU leaders faced a historic moment that will call for historic decisions.

Macron also said leaders will be giving the European Commission a mandate to draw up means to protect households from rising prices, adding that several technical proposals were in the works and could be finalised by the end of the month.