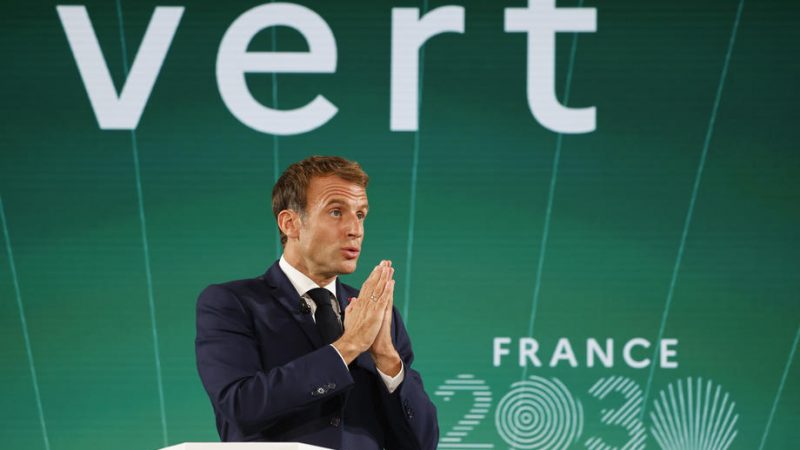 The president also stated his wish for two million hybrid electric vehicles produced in France by 2030, as well as the first low-carbon aircraft. [EPA-EFE/LUDOVIC MARIN]

Faced with climate change, but also the demographic challenge and growing inequalities within society, Macron detailed ten major objectives with a view to “understanding, living and producing better” in France by 2030.

The keyword in the president’s speech was innovation, which he sees at the heart of the transformations to come.

Macron said the current paradigm according to which France could push de-industrialisation while continuing to innovate and produce was wrong, reminding that the COVID-19 pandemic had illustrated the country’s vulnerabilities and calling for an end to the opposition between industry and innovation.

Of the €30 billion earmarked for “France 2030”, €1 billion will be invested in the development of “innovative small-scale nuclear reactors with better waste management”, the president announced. Macron would like to see France as a “leader in green hydrogen” by 2030, for which nuclear power could deliver a significant amount of decarbonised electricity.

Overall, more than €8 billion will be devoted to the decarbonisation of industry and green energy, Macron said.

The president also stated his wish for two million hybrid electric vehicles produced in France by 2030, as well as the first low-carbon aircraft.

“I think it’s absolutely feasible,” the president said, recalling that “France is a great aeronautical country” and promising a total of €4 billion to support the key players of these “transports of the future”.

Last but not least, Macron wants to accelerate the agri-food transition by investing in “healthy, sustainable and traceable” food, but also innovative “revolutions” in the digital, robotic and genetic sectors. In addition to better food, the president promised to invest an additional €3 billion in the health sector.