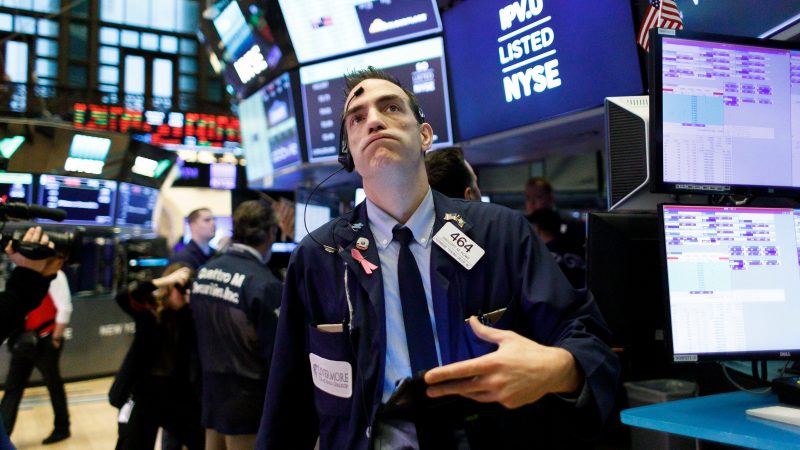 A trader reacts after the Dow Jones industrial average dropped enough to trigger a 15 minute pause in trading on the floor of the New York Stock Exchange, on 12 March 2020. Stocks around the world continued to lose value as investors react to the economic impact of the coronavirus spread, which the World Health Organization has now labeled a pandemic. [EPA-EFE/JUSTIN LANE]

World markets experienced their worst day in decades on Thursday (12 March) as fears of a worldwide recession caused by the coronavirus pandemic wiped trillions off valuations.

Shellshocked investors fled for the hills as governments across Europe and in the United States struggled to get a grip on the crisis that has swept the planet and shut communities down.

Central bank moves to support financial markets have also failed to staunch the bloodletting, while Donald Trump’s decision to shut the US border to European travellers added to the panic.

“Markets remain in a freefall as uncertainty persists with no reliable anchor which can create near-term stability,” Ben Emons, at Medley Global Advisors in New York, said.

The Dow lost 10% in its worst session since 1987, while London also had its worst day since that year. Frankfurt had its blackest day since 1989, the year the Berlin Wall fell, while Paris suffered its biggest one-day loss on record.

Analysts said Trump’s ban on travel from Europe deeply rattled investors, and measures intended to shore up business and markets were proving insufficient.

The New York Federal Reserve announced measures to inject an additional $1.5 trillion into financial markets this week and launch a bond-buying programme, while the European Central Bank unveiled emergency efforts but did not include an interest rate cut.

‘Boxes under the bed’

“The turmoil in markets has moved up another notch over the past 24 hours with President Trump’s European travel ban and underwhelming stimulatory measures adding more fuel to the fire of uncertainty, instead of providing a dose of reassurance,” wrote National Australia Bank’s senior FX strategist Rodrigo Catril.

“New containment measures to slow the spread of COVID-19 have increased the prospect of a severe global economic growth downturn,” he added.

The crisis has hit the travel industry particularly badly as new restrictions prompt mass cancellations, while sporting events have been scrapped globally and everything from museums to Disney theme parks have shut.

“Global supply chains are no longer just ‘disrupted’ but are now in the process of shutting down completely,” he added.

Markets have also been shaken by an oil price war between Saudi Arabia and Russia, compounded by fears that travel restrictions will further dampen energy demand.

On currency markets, the dollar surged against high-yielding, riskier units and hit a record high against the Indian rupee while the South Korean, Australian and Canadian dollars, Thai baht, and South African rand were all more than one percent down.

The greenback was up more than two percent on the Indonesian rupiah, while it also rose against the yen despite the Japanese unit’s safe-haven position.

Jeffrey Halley, senior market analyst at OANDA, added: “Most worryingly, US bond yields rose… when really the situation was ripe for a mass stampede to the US Treasury market driving down yields.

“That suggests two things: One, credit is tightening – a gruesome scenario for business. Two, investors are now moving to the ultimate haven, hoarding cash in boxes under the bed.”