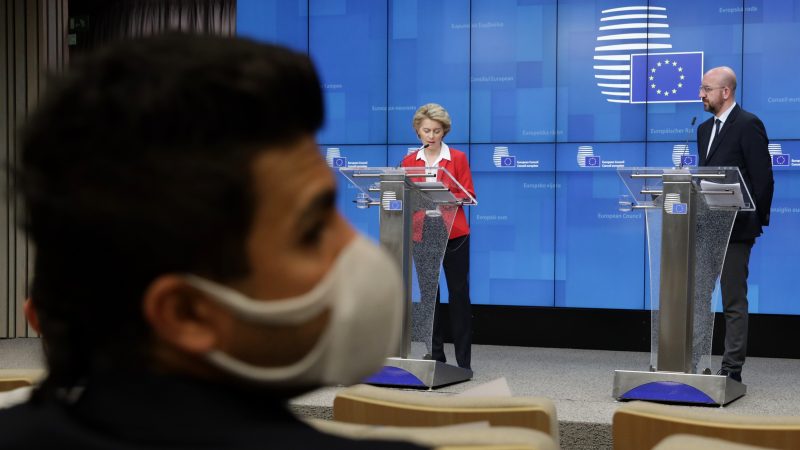 EU member states were already at loggerheads over the Multiannual Financial Framework, the EU’s seven-year budget, when the coronavirus hit the bloc in late February.

EU leaders disagreed over the size and the allocation of the funds, which amounted to €1,094 billion (1.074% of EU’s Gross National Income), according to the latest proposal on the table drafted by European Council President Charles Michel.

MEPs are now urging the Commission to revise its original plan and come up with new spending plans.

“The situation today has very little in common with almost 2 years ago, when the MFF 2021-2027 proposal was put forward,” said the chair and the coordinators of the political groups in the European Parliament’s Committee on Budgets.

In a statement, the MEPs said they “strongly renew our call on the European Commission to act realistically and responsibly and to urgently update its MFF proposal to take account of the new challenges and needs deriving from a post-Corona world.”

In their statement, the MEPs also called for the use of around €4 billion of unallocated funds still available in the 2020 budget, and €3 billion of unspent money in the EU’s 2019 budget that will soon go back to the member states.

Michel, who is trying to narrow the differences among the 27 with a new proposal, told a Belgian TV on Wednesday that Europe needed a “Marshall Plan-like” plan, with a strong ambition to deal with the consequences of the coronavirus pandemic.

For EU diplomats, the MFF will play an important part in it.

The MEPs said that the pandemic is “brutally revealing the weaknesses of our health systems and economies”.

For that reason, the EU should equip itself with enough financial means to avoid that this situation happens again in the future.

The novel coronavirus COVID-19 is expected to cause a “severe downturn” in the EU, wiping out as much as 10% of its GDP, according to some estimates.

Against this backdrop, MEPs warned that this recession “should not serve as an argument for a smaller budget, as it would lead us to failure in case of any future crisis.”

However, member states against increasing the size of the budget, including the Netherlands, Austria, Sweden and Denmark, are sticking to their guns.

Even if more funds are allocated to address the consequences of the virus, “the money is the money, which is 1%,” said an EU diplomat.

As the current MFF will end in December and there is no agreement on the overall volume, MEPs also warned that there won’t be enough time to have the big-spending envelopes, such as the Common Agricultural Policy and Cohesion, ready for January 2021.

For that reason, they urged the Commission to “propose immediately a contingency plan to protect beneficiaries and avoid a shutdown of Union programmes at the end of this year.”

“In times like today, nobody should gamble with the risk of not having a budget next year,” they added.

Member states are split in two camps, said an EU official. While some capitals say the MFF talks are not an urgent matter since there are other burning challenges on the table to fight the pandemic, other governments insist that the MFF will be a key instrument to finance the future recovery plan, and progress toward an agreement should be made sooner than later.

EU sources expected that the MFF discussion could come up “soon”.

Other ideas doing the rounds include the possibility of drafting a ‘mini-MFF’ for a couple of years to have the financial means to provide support to the economy from January 2021.