Merkel: Germany must help other EU states get back on their feet 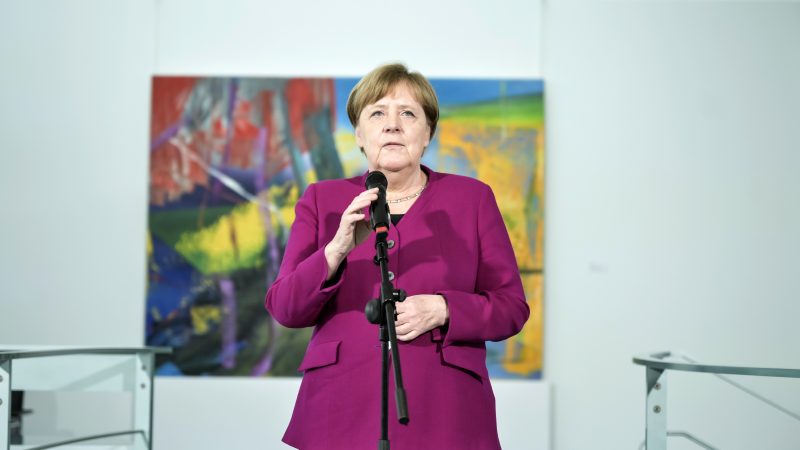 A handout photo made available by the German Government Press Office shows German Chancellor Angela Merkel speaks to the media after a video conference with the Wernigerode health office in the Chancellery in Berlin, Germany, 11 May 2020. [Jezko Denzel/EPA/EFE]

Germany must help its European Union neighbours revive their economies after the coronavirus crisis, Chancellor Angela Merkel told a meeting of lawmakers from her conservative bloc on Tuesday (12 May), according to several participants.

It is essential for Germany, as an export nation, that its EU partners also do well, Merkel told the lawmakers, with a view to consultations on an EU reconstruction programme, both the scale and the financing of which were open, the chancellor said.

Germany has been the most successful large European country in curbing the spread of the virus, partly thanks to massive testing, which has prompted a partial reopening of the economy.

It is in nobody’s interest for only Germany to be strong after the crisis, Merkel told the meeting, the participants said.

The chancellor agreed with Ralph Brinkhaus, leader of the CDU/CSU conservative parliamentary bloc, that Germany would have to transfer considerably more money to Brussels, they added. The Bundestag would be involved in deciding on the financial aid.

Earlier, Brinkhaus said Germany wanted to help its EU partners, but it had to know what the billions would be used for. The European Commission is expected to present revised budget proposals next week.

CDU budget expert Eckhardt Rehberg painted a gloomy picture of German finances at the meeting. He warned that it would probably take until 2023 for the tax take to recover to 2019 levels, with revenues down 6.5% this year, participants said.

Merkel also warned the lawmakers against getting their hopes up too much about reopening Germany’s borders, an issue her cabinet will discuss on Wednesday.

Coalition sources said that officials plan to ease controls at the German borders that were introduced in response to the pandemic but they will probably not be completely abolished by 15 May.

The government wants to move towards normalisation in the EU’s passport-free Schengen zone.

Merkel told the CDU/CSU parliamentary group there should be an easing of border controls, according to meeting participants. But she also spoke of a staged process and said France did not want to fully open its borders before mid-June.