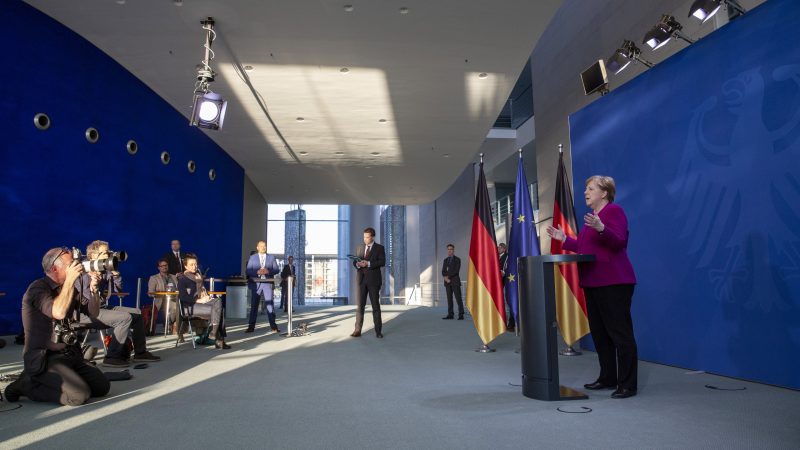 Speaking to reporters after a video conference of EU leaders on setting up a joint fund to avert an economic collapse in parts of the 27-member bloc, Merkel said leaders agreed on the need for a fund but disagreed on details.

“It was clear to everyone that we need such a recovery fund,” Merkel told reporters. “I want to say very clearly that such a joint solution is in Germany’s interests, because things can only go well for Germany if they go well for Europe.”

Europe is facing a big economic shock from the spread of the novel coronavirus and European Central Bank Governor Christine Lagarde told leaders the pandemic could cost them between 5% and up to 15% of their economic output, a diplomatic source said.

“We were all agreed that this wasn’t about 50 billion euros. I said only that it wouldn’t be good if one simply announced the size – you have to justify it. That was the spirit in which I was speaking,” said Merkel.

Asked about the amount under discussion, she said she had mentioned a trillion euros only in the context of working out the size of any economic programme needed.

“That’s why we have asked the Commission to make proposals to us, assessing the individual sectors and working out how much damage they will suffer,” she said, highlighting the tourism and car sectors.

Saying all the elements of a package had to be put in place during May and be ready by 1 June, Merkel acknowledged differences between countries but said the atmosphere of talks had been good.

“We weren’t always in agreement, for example on whether that should be done in the form of grants or credits or how it should be implemented, but we all agreed that this recovery fund had to be closely linked to the next medium term financial framework,” she said.

Germany would have to make higher contributions to the future EU budget, she said, and reiterated her opposition to euro bonds.

“It is not acceptable that debts are mutualised,” she said.

According to German Finance Minister Olaf Scholz, Europe is now standing at a crossroads.

“We will only be able to do such big solidarity packages if we go one step further in the direction of fiscal union,” Scholz told ZDF television on Thursday, adding that meant 27 separate EU states could not act in isolation in terms of income and spending.

“It will certainly be necessary to harmonise a few things,” he said, adding he had long spoken out for a minimum taxation level in the EU to avoid tax dumping. On the tax revenue side, options included a financial transactions tax and taxes linked to emissions, for example on air transport.

“You can imagine that with its own means, what the European Commission could do is much bigger,” said Scholz, a Social Democrat. “If you think about that, you see what a crossroads we are standing at on the question of Europe.”

Asked about the European recovery fund under discussion, he said its funding had to be linked to the future EU budget and that there needed to be heavy investment at the start of the 2021-27 year period.