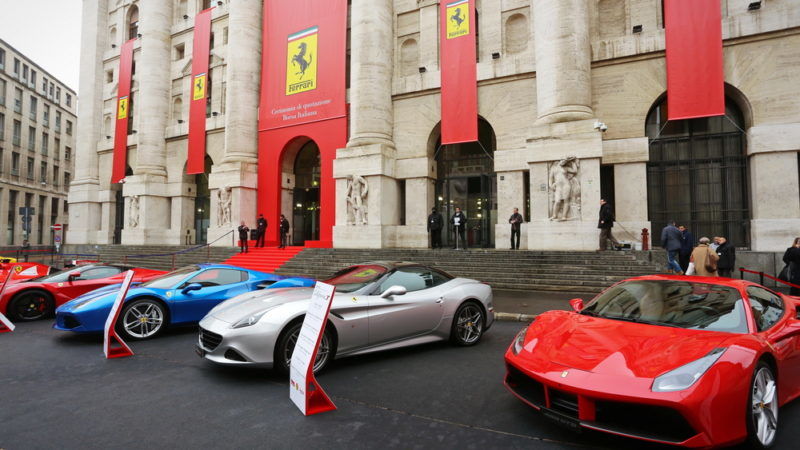 Milanese experts insist that the city is ready to step up and compete for London's business after Brexit. Pictured, Ferrari's debut on the Milan Stock Exchange last year. [MikeDotta/ Shutterstock]

The United Kingdom’s decision to leave the EU will inevitably cause some of its financial assets to set sail for shores new, purely for regulatory reasons.

This includes its prized euro clearing business, worth some $570 billion a year, which was discussed at the launch of the Global Financial Centres Index (GFCI) in the northern Italian city yesterday (27 March).

Chairman of the Select Milano committee Bepi Pezzulli warned that Italian’s tendency towards self-denigration would have to be put to one side if aspirations of turning Milan into the financial centre of the eurozone are to be realised.

“In terms of infrastructure, Milan is a world leader and can offer a solution to the Brexit issue because it is already a junior partner of London. We are not planning on stealing London’s business but we want to offer the city new opportunities,” he explained.

“Milan has all the characteristics needed to attract the financial institutions that will leave London after Brexit,” insisted Luigi Casero, Italy’s deputy minister of economic affairs, warning that it is “a complex game because there are many other European cities after the same role”.

Casero added that “Milan can compete and it is the only Italian city that can do so. National and local government have to work together as much as possible to attract the opportunities. In just a few months, we have to come up with plan to increase Milan’s attractiveness, with rules to encourage investment. That’s why we need a marketing campaign to highlight Milan’s image abroad.”

It’s something that hasn’t worked so far, as Milan only ranked 56th in the index of the world’s financial centres.

The GFCI’s co-creator and main author, Mark Yeandle, admitted that “the data does not reflect what is happening in Milan. This is because people do not know about the changes being made in the city. There’s a need for efficient communication”.

EY’s Donato Iacovone agreed, saying “the role Italy occupies in terms of exports, for example, is not perceived correctly because it is not communicated well”.

He added that “Milan, in particular, has the infrastructure and airports that work. We don’t lack anything that would make us competitive but we must communicate what it is we are doing in the correct way. We need an international environment and good marketing; we need to attract foreign companies one by one. But it is not happening because we do not convey one image of a unified country. The image seen abroad is one of a fragmented country.”

“Milan is already an advanced international financial centre,” said Guido Rosa, a member of the executive board of the Association of Foreign Banks in Italy (AIBE).

“I represent the financial community in Milan and I live this reality every day. I have seen this city grow. Milan hosts more than 40 international banks that do their business here, have branches here, and these banks operate in three main areas.

“They have a retail share of some 16% and have secured their presence here in Milan. It has been a constant here over the last few years, despite a certain level of political and economic instability. Banks have been doing business here for some time and are satisfied and making a profit. That means that international banks will find a positive environment in which to work here in Milan. The city is already an international market and it already has an international mindset.”

“One element that Milan has to target if it is to win this post-Brexit battle is infrastructure,” insisted President of the SEA Group Pietro Modiano.

“In terms of Milan’s airports, I can say that the rough patch is over. 100 airlines call at Malpensa and Linate, 90 of those are from outside of the EU, with many intercontinental routes. We did lose a bit of time on some occasions. But things are stepping up now. There is an enormous push now. It’s enough to consider that Malpensa has shown growth of 19% on average. It still plays in the second division but it is growing and will reach the premiership.”

An EY survey into the factors examined by the GFCI report showed that Milan’s main selling points include the fact that Italy, the eighth largest economy in the world and third in Europe, has a good level of private wealth, particularly in property investment.

According to the World Bank Group’s Doing Business in Italy report, the country is also first globally in terms of facilitating foreign trade across borders, in terms of time taken and costs needed to export. It is surprising given the obvious shortcomings Italy still has in infrastructure and bureaucracy.

EY’s investigation showed that under the current regulatory framework foreign companies interested in doing business in Italy benefit from renewed efficiency and fluidity of the economic and legal system. This is down in part to increased efforts against corruption and money laundering.

As for taxation, different measures have been implemented in order to boost investment in Italy. Corporate tax has been reduced from 27.5% to 24% and other incentives have been launched in order to attract foreign companies, including a flat tax on income and capital gains on investments earned abroad.

In terms of human capital, a jobs act has been introduced that simplifies the hiring and firing of staff. Other relevant laws that are aimed at combatting the country’s brain drain include a five year tax exemption for people choosing to come back to Italy. That is on top of a 90% tax reduction for researchers that live abroad.

As for infrastructure, the London Stock Exchange and Borsa di Milano are part of the same group, meaning moving euro clearing to Milan would be an efficient choice. Ample commercial and residential space, four metro lines, the space afforded by the Expo facility, eight universities and three international airports all make a strong case for a post-Brexit shift to Lombardy.