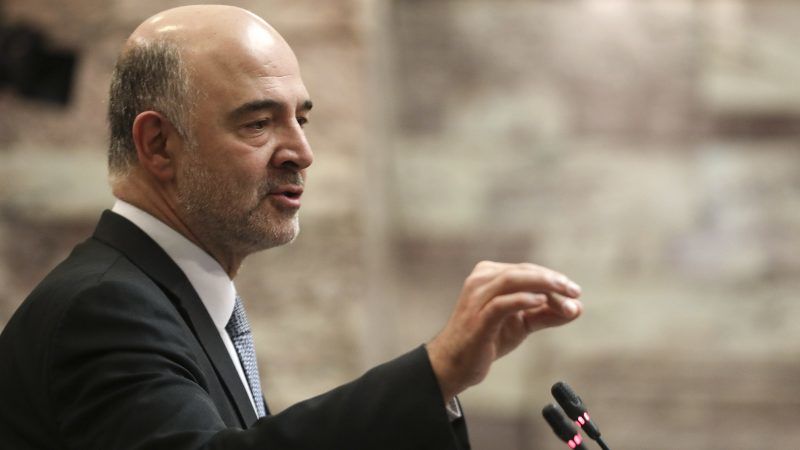 Pierre Moscovici, Member of the EC in charge of Economic and Financial Affairs, Taxation and Customs addresses parliamentaries inside the Greek parliament, in Athens, on February 9, 2018. [European Commission]

“I know this will raise some eyebrows in this audience. It is happening,” Moscovici said, speaking at a conference about SMEs that was organised by Brussels lobby group DigitalEurope.

The EU tax chief addressed a roomful of conference attendees from some companies that are likely to be affected by the legislation. Other speakers at the event represented multinational firms like Google, Microsoft and Intel.

“Digital taxation is no longer a question of ‘if’ – this ship has sailed,” Moscovici added. The European Commission’s announcement of the proposal is scheduled for 21 March.

The French Commissioner, who is from the Socialist Party, told conference attendees that there is a “deep schism between where digital profits are generated and where they are taxed, if at all”.

He pointed out that tech giants’ revenue has boomed—and taxation has not followed. Average annual revenue growth for “the top digital firms” has hovered around 14% since 2011, compared to a growth rate of 0.2% for other multinationals and 3% for IT and telecoms firms, he said.

Moscovici repeated his commitment to working with the OECD on an international solution, although that will take longer to negotiate. But he insisted that the March proposal, which he described as a “simple stopgap measure at EU-level”, is needed to calm member states’ growing concerns about international tech companies’ tax payments.

Those concerns are “now shared at the highest political level in many European governments”, Moscovici said.

France, Germany, Spain and Italy led the call for legislation last year, and have picked up support from other member states.

But a handful of countries led by Ireland and Luxembourg have pushed back against the Commissioner’s plans. All member states must agree unanimously on any legal change to EU tax law.

Digital companies pay an average corporate tax rate of 9% across the EU while traditional firms pay an effective tax rate of 21%, Moscovici said.

Without naming the firm, he also singled out “one social media company” that “generates today well above half of its revenues from its international business” but paid 5% of its total taxes in those countries.

More than half of Facebook’s total revenue in 2015 came from its business outside the United States, according to the company’s filing to US authorities.

Moscovici urged conference attendees to “be part of the solution” as he consults businesses in the next few weeks before announcing the new legislation. “We see no need to oppose member states and digital companies. They share the same interest.

“Some of you question that the digital economy can be ring–fenced. Others feel strongly that Europe should not move forward without its international partners,” he said.

Big tech companies are wary of Moscovici’s plans for legislation aimed at the sector.

He met a Google executive at the World Economic Forum in January and a representative from Amazon earlier this month.

Moscovici said at an event organised by EURACTIV.com last week that he will host a roundtable discussion about the proposal with a group of different tech companies on 7 March in Brussels. The meeting is not yet published in his official agenda.

Commission officials drafting the legislation are considering how they will determine where digital companies generate profit and how to tax “new forms of value creation, such as the user contribution, in the allocation of profits”, Moscovici said on Tuesday.

In a recent interview with EURACTIV, DigitalEurope’s director general Cecilia Bonefeld-Dahl criticised suggestions that the legislation might tax companies based on the value created by data from their users.

“I cannot see how this can be done and I’m not sure it’s the right solution. Giving your data is something you do to receive a service, so to me, this is very, very difficult to look at,” Bonefeld-Dahl said.