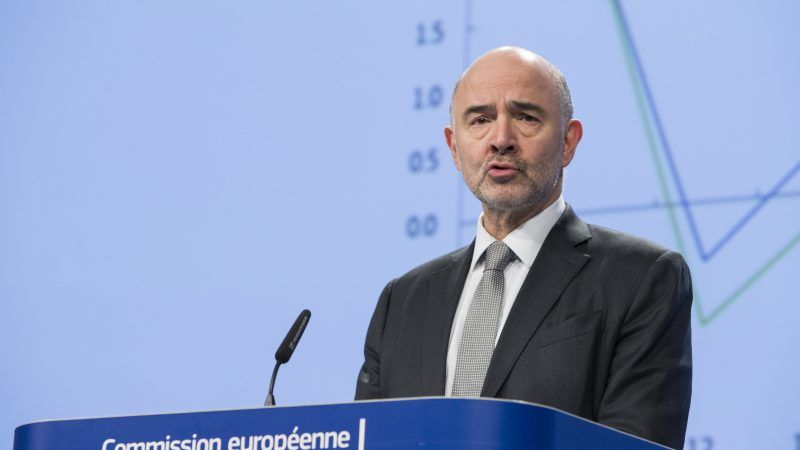 Economic Affairs Commissioner Pierre Moscovici, during the presentation of the winter forecast on Wednesday. [European Commission]

Pierre Moscovici, the European Commissioner for Economic Affairs, said on Wednesday (7 February) he was not worried about market volatility, as the Commission revised upwards its growth forecast to 2.3% this year and 2% in 2019, both for the eurozone and the EU as a whole.

Presenting the Commission’s winter economic forecast to reporters, Moscovici commented that markets had performed very strongly in the US over the past 18 months. “Perhaps a little too strongly in some instances,” he added.

“What we see is a reappraisal of risks by investors, which often comes with higher volatility,” he explained.

Although “excessive reactions” may bring new risks, he ruled out the possibility that this volatility could affect the Commission’s positive outlook for the European economy.

“Frankly speaking, I am not worried. And I hope it is not the famous last words,” he said.

Despite Moscovici’s confident message, the document drafted by his team warns of a “sharp correction in financial markets” as one of the risks facing the European economy.

“Such an event could be triggered, for example, by faster-than-expected tightening of US monetary policy”, for example, due to inflation increases caused by the repatriation of corporate benefits.

Companies on the US stock market have been falling since Monday due to concerns that interest rates could be hiked sooner than expected due to robust growth.

The turbulences have spread all over the globe, triggering fresh concerns about the risk of asset bubbles. Investors, experts and institutions have cautioned that the overvaluation of some assets, together with the low volatility, indicates that a market adjustment is nearing.

The risk of a new economic crisis is real in the next two to three years, some of them warned during the World Economic Forum in Davos.

In particular, participants in the Davos forum feared that a fall of the price of equity and other assets could affect the financial system and ultimately the real economy, weighted by high levels of debt.

In its document, the Commission indicates that “global financial markets may be vulnerable to a re-assessment of fundamentals and risks”. And this adjustment “could expose fragilities related to the debt overhang in a number of member states”.

Mario Draghi, the President of the European Central Bank, tried soothing those fears, telling the European Parliament on Monday there was “little indication that generalised imbalances are emerging”.

“There is no evidence of systemic credit-fuelled bubbles,” he told MEPs.

Despite those threats, the EU executive concluded that the risks are “broadly balanced”, and maintained a positive look both for the euro area and the EU as a whole.

The Commission improved its forecast compared to its last review in November, thanks to a stronger than expected economic activity in the second half of 2017. In addition, indicators suggest that the growth momentum will continue this year. 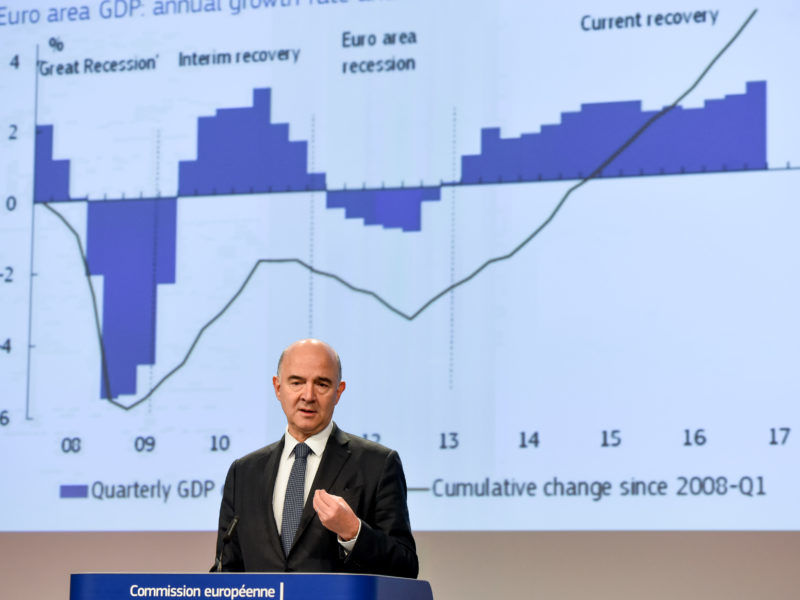 The growth forecast and market turbulences would partly depend on how central banks across the globe exit the expansionary monetary stance implemented in the aftermath of the financial crisis.

The Commission backed the ECB’s prudent approach. The executive slightly raised this year’s inflation forecast for the eurozone to 1.5%, which is still well below the ECB’s 2% target.