European Commissioner in charge of cohesion and reforms, from Portugal , Elisa Ferreira during her hearing before the European Parliament in Brussels, Belgium. [Olivier Hoslet/EPA]

“Nuclear energy is excluded from the Just Transition Mechanism,” Ferreira told a small group of journalists ahead of the college meeting of the European Commission that approved the proposal for the fund aimed at supporting poorer EU regions achieve climate neutrality.

EU leaders agreed in December on a bloc-wide objective of reaching climate neutrality by 2050. In order to convince Hungary and the Czech Republic to sign up, they also reaffirmed the right of countries to decide on their own energy mix, including nuclear.

Poland refused to sign up, saying it needed more EU funding to help phase out coal. The Just Transition Fund is intended to support regions that will be particularly affected by the changes brought by ‘greening’ the economy.

Ferreira confirmed “no country or region” will be excluded but the objective is to concentrate on those areas facing the most dramatic challenges.

The Commission will, therefore, take into account the intensity of greenhouse gas emissions of the industrial sector compared to the EU average and the impact in terms of employment of the transition for these industries. The relative prosperity of the country will also be considered.

“One thing is the needs of a country and another thing is the capacity that the country has, both from the past but also at the moment, to solve its own problem without any specific help,” she said.

Access to the fund will not be automatic though. “Member states will have to make a transition plan for these regions that is coherent with the national plan,” Ferreira explained.

Polish Prime Minister Mateusz Morawiecki insists that Poland should be allocated a “fair share” of the new fund. However, given that Poland has not signed up to the climate neutrality objective, financial aid will be conditional on environmental commitments.

“We are convinced that with the right means and the right plans, we can make progress also in relation to these individual compromises from different member states,” she added in reference to June’s summit where EU leaders should reassess the 2050 pledge.

The decisions over which regions are to be supported will depend on both the assessment of the situation by the Commission in the context of country-specific recommendations issued in the framework of the European Semester and each country’s priorities.

The fund in detail

The Fund will provide financial aid to countries in their work towards climate neutrality. Within a wider mechanism, the Commission aims to provide technical assistance and ease state aid rules for green investments.

The fund will be based on €7.5 billion of “fresh money”, to be topped up with financing from the European Regional Development Fund and the European Social Fund Plus, both part of the EU’s cohesion policy, but its use will be limited to a 20% of the total allocation.

Ferreira admitted the money is not huge but hoped it could help leverage up to €100 billion for the period 2021-2027 in investments through the support of private investors.

For every euro member states receive from the JTF, they are expected to top it up with €1.5 to €3 from cohesion funds, and the corresponding co-financing rate which will depend on the category of the region. To access this first pillar, regions need a transition plan.

Furthermore, the Commission vowed to ensure that a large proportion of the projects assisted under the investEU will focus on sustainability. “With an endowment of €1.8 billion (already foreseen in the EU budget proposal), we are confident that about €45 billion of investments can be generated,” an EU official explained.

Thirdly, the European Investment Bank will give “priority access” to loans for transition projects, although talks with the lender are not yet finalised. It will consist of a public sector loan facility where the Commission will contribute €1.5 billion.

The EIB is expected to match it with €10 billion from its own funds, “that will then generate about €25 to €30 billion of investments.”

Negotiations over the EU’s next seven-year budget have been deadlocked over the past few months as member states remain profoundly divided. European Council President Charles Michel took over the talks in December in an effort to reach an agreement.

“We are not going to propose a new MFF (Multiannual Financial Framework) at all. What will be possible is to accommodate €7.5 billion within the negotiation. This will be a political decision,” Ferreira explained.

One of the contentious issues is the size of the Cohesion Policy budget which would be cut by 7% under the current Commission proposal, and which will now have to finance the Just Transition Fund.

Countries, Ferreira argued, “will not lose because this will come on top of what the Commission has already allocated to Cohesion Funds.” However, this remains subject to negotiations.

“If we are taking seriously the Green Deal, this will cause regions a big change and we need a new dimension,” she argued and added that some areas and sectors in Europe will face “extraordinary” pressure.

The JTF would allow member states to fund large companies or industrial plans, according to Commission officials. Although the EU counts already on financial instruments that allow to compensate for big job loses -such as the Globalisation Fund- or accompany workers in acquiring skills, Commissioner Ferreira defended the fund.

“What the commission is trying to do here is to give an adequate answer to a new priority that derives directly from the decision to accelerate and to concentrate on climate transition,” she argued.

Ferreira explained that the Common Provision Regulation that governs cohesion will have to be slightly modified to accommodate the fund too. Although this could further complicate the negotiations on the legislative package, the Commissioner said these are only “small adaptations”.

But she warned that “the basis for this fund is Cohesion Policy so it follows the same rules and therefore, the rule of law conditionally applies,” scotching rumours that the Commission would lower the bar to get the East’s support. 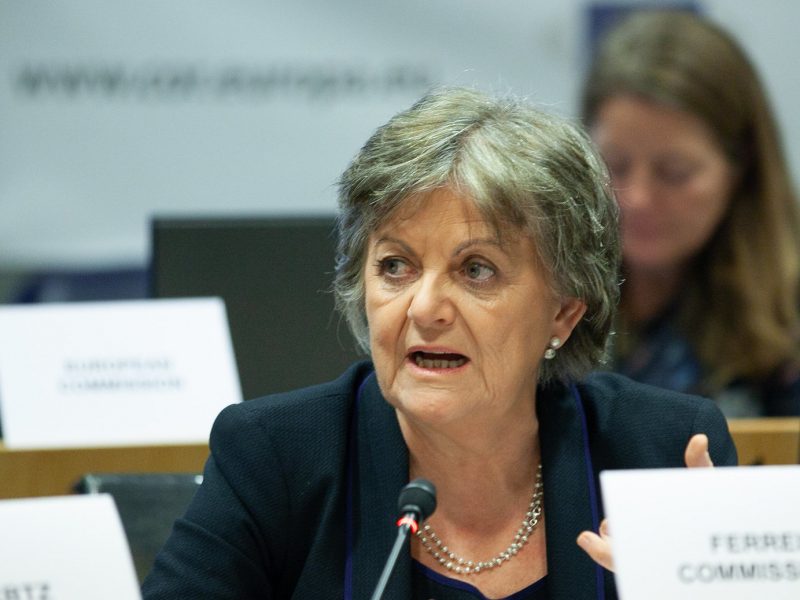