German Chief of Staff and acting finance minister Peter Altmaier (L) and Spanish Minister of Economy Luis de Guindos (R) walk past each other at the start of a Eurogroup Finance Ministers meeting in Brussels, Belgium, 06 November 2017. [EPA-EFE/STEPHANIE LECOCQ]

MEPs tried to revive the race for the ECB vice-presidency this week and said they considered Ireland’s central banker Philip Lane to be more convincing than the frontrunner, Spain’s economic minister Luis de Guindos.

Following an exchange of views with the European Parliament’s Economic and Monetary Affairs Committee on Wednesday (14 February), its chair Roberto Gualtieri said that some groups had expressed “reservations” about De Guindos.

“The majority of the political groups considered Governor Lane’s performance more convincing,” he added in a statement issued today.

Spanish socialists MEPs, the Greens and the Left groups opposed picking the Spanish minister as the successor to Vítor Constâncio from 1 June.

The critics stressed that he is too political, compared with Lane’s solid academic background and experience as the central banker of Ireland since 2015.

“It was made clear yesterday that his [De Guindos]  mismanagement in financial matters in Spain, the possible conflicts of interest coming from his past as an investment banker and his refusal to resign as minister are increasingly evident burdens of his candidacy,” said MEP Ernest Urtasun (Greens/ALE).

The Parliament also regretted that there were no female candidates as Gualtieri had demanded from the Eurogroup president in December. 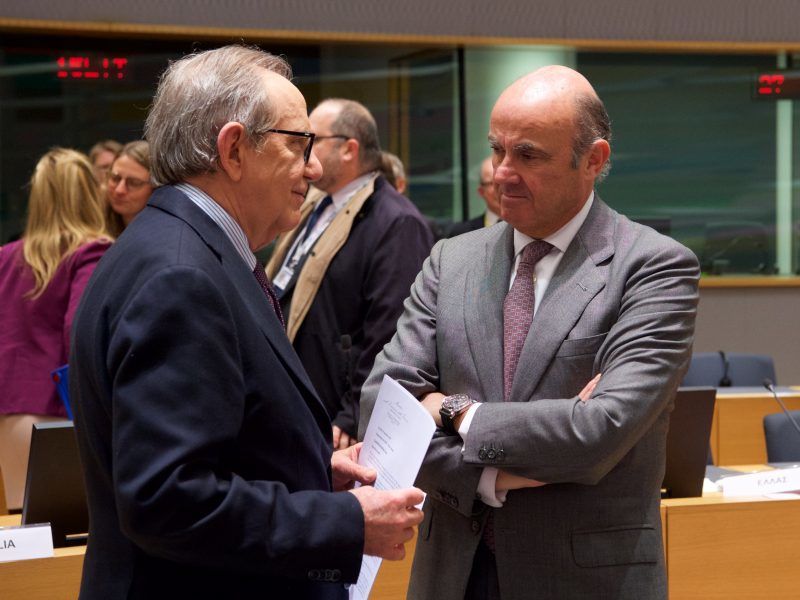 This fresh criticism over De Guindos’ candidacy adds to the lukewarm support that his nomination enjoyed in Frankfurt.

However, he remains the favourite given that eurozone countries which have expressed their views supported his bid. The ECB and the Parliament only need to be consulted in the nomination process after the ministers pick a candidate.

Germany is one of the strongest supporters of De Guindos. The Spanish government argues that Berlin had promised the post to Madrid in order to correct the underrepresentation of the fourth largest eurozone economy among the bloc’s top posts.

According to Bloomberg, Lithuania, Austria, Cyprus and Finland are backing De Guindos and Latvia has already announced its support for the Spanish candidate.

The votes of three Socialist governments – Portugal, Slovakia and Malta – are also going to De Guindos.

Speaking at an event in EURACTIV on Wednesday, the commissioner for economic affairs, Pierre Moscovici, said the Socialist governments supported him because of his “good work”.

His Eurogroup colleagues are not backing him as politicians but as ministers, because of his policies and because he is a “good colleague”, Moscovici said.

Speaking to reporters before his closed-door session with MEPs on Wednesday, De Guindos said that his candidacy is based on the defence of the central bank’s independence, the parliamentary oversight of ECB activities and transparency.

During the Ecofin Council next Tuesday (20 February) the 19 eurozone finance ministers will pick the candidate they would then propose to the EU leaders. The European Council should confirm the appointment during the summit on 22-23 March.

But a senior EU official explained that the ministers would like to avoid a formal vote on Tuesday. In order to reach a consensus, the Eurogroup would “sound out” the possibilities of each candidate the day before, the official added.

However, he said that there is no format to reach this consensus through debate or presentations. Lane, who is not a Eurogroup member, is not expected to be invited to the meeting.

Given the solid backing expressed for De Guindos, it is unclear if Lane will be capable of securing five countries, besides his own, which would be needed to maintain his options open.

For that reason, one of the alternatives that financial sector observers have pointed out is that Lane would step aside on this occasion to facilitate the Spanish minister’s nomination. In exchange, he would get one of the other four ECB jobs that will become available over the next two years, in particular, the post of the chief economist once Peter Praet steps down on 31 May 2019.