European Parliament President David Sassoli is expected to raise the issue of the EU's long-term budget during the EU summit on Thursday. [EPA-EFE/FRANCOIS LENOIR / POOL]

In a resolution to be voted Thursday, a leaked copy of which EURACTIV has seen, Parliament notes that is prepared “to withhold” its consent needed to approve a new EU budget, “until a satisfactory agreement is reached,” which could potentially delay the establishment of the recovery fund, given the strong links between the two.

In the text, EU lawmakers welcome the deal on a recovery fund but warned that it “does not accept” the political agreement on the so-called MFF (Multiannual Financial Framework), the EU’s seven-year budget. The proposal for a €1,074 billion budget is far below what the Parliament had demanded.

EU lawmakers, the text reads, “will not be forced into accepting a bad agreement” and argued the council conclusions agreed after one of the longest summits in history are only a political agreement between EU heads of states and governments.

“We would like negotiations to be open with the Parliament to give responses to the cuts that we deem unjustified,” European Parliament President David Sassoli told a press conference on Wednesday.

The resolution, which counts on the support of the main groups in the chamber, including the European People’s Party, Socialist and Democrats, Renew Europe, Greens and the United Left, argues that the proposed cuts “go against the EU’s objectives.”

Sassoli said that European Commission president Ursula von der Leyen was ready to open negotiations between the Commission, Parliament and Council to reach an agreement before autumn. All the sectoral legislation needed to channel the fund depends on interinstitutional talks among the three.

The Parliament welcomed the overall agreement but regretted the cuts on the budget, the watered-down proposal for a link between access to cash and respect for the rule of law and the lack of a clear proposal on own resources to repay the recovery fund, a common pot financed by issuing joint debt in the markets.

The Parliament believes the €750 billion  recovery instrument is “a historic move for the EU”. However, they regret the “massive cuts” in grants, arguing it undermines its firepower. The final deal comprises €360 billion in loans and €390 billion in grants, compared to the original €500 billion grant and €250 billion loan proposal made by the Commission.

MEPs regret that EU leaders slashed health, education, research and innovation programmes, describing the move as “dangerous in the context of a global pandemic”, as well as the instruments supporting regions in the transition towards a greener economy.

“If there is less research, how are we going to be more resilient?” Sassoli asked. He added that EU lawmakers are worried about the lack of a concrete plan on own resources, which the Parliament says is key to their consent.

On governance, the Parliament notes that the move to an intergovernmental approach should involve a stronger role for MEPs in scrutinising the use of EU funds, although they did not specify in which form.

Parliament is also set to hit out at EU leaders’ softening of rule of law conditionality on payments, stating that it “strongly regrets that the European Council significantly weakened the efforts of the Commission and the European Parliament to uphold rule of law, fundamental right and democracy” in the framework of the budget and recovery instrument.

Following the Council agreement, there has been a degree of ambiguity over whether EU leaders have duly addressed the issue of forcing member states to oblige by the rule of law.

Hungary’s prime minister Viktor Orban, in particular, praised the outcome of the talks in this field, noting that he had been successful in stifling attempts to connect recovery payments to good governance obligations.

The Council text notes that “financial interests shall be protected in accordance with the general principles” of Article 2 of the treaties, and cites a ‘regime of conditionality’ to be established in this regard.

In order to protect the use of funds, EU leaders also called upon the Commission to present “measures to ensure the collection and comparability of information on the final beneficiaries of EU funding for the purposes of control and audit.” 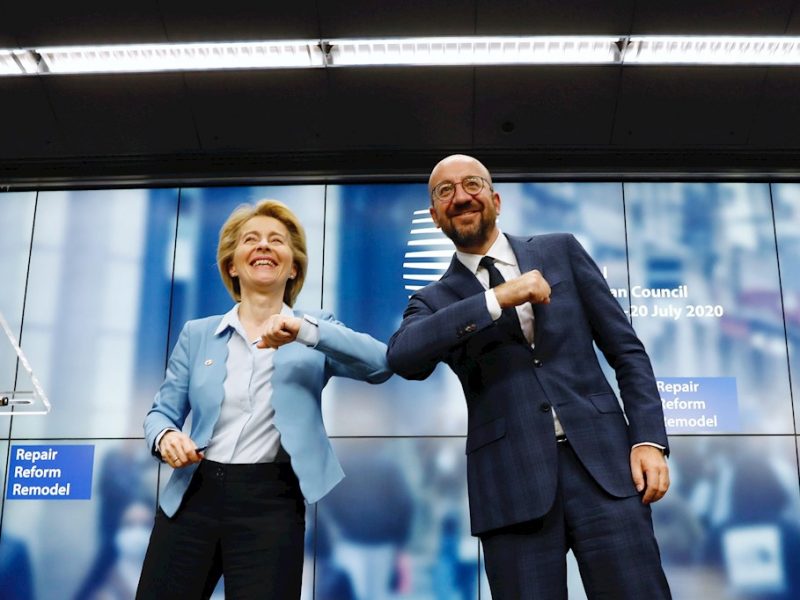 The own resources question mark

Ahead of the European Council last week, the Parliament warned it would not give its consent without a clear plan to set up new own resources to pay back the debt issued to establish the recovery fund.

In the resolution, MEPs argue EU leaders have “failed to tackle” the areas which could provide the most efficient sources of funding, although the agreement secured earlier this week highlighted a series of financial sources that could help fund the recovery package.

A senior EU Commission official conceded on Wednesday that the executive “would have preferred larger own resources.”

The Council conclusions noted that the Commission will table in the first semester of 2021 proposals on a carbon border adjustment mechanism and on a digital levy “with a view to their introduction at the latest by 1 January 2023.” However, the Parliament would like to see a pitch as soon as this September.

However, in terms of new tax legislation, EU efforts could be stymied by the fact that agreements in this field require unanimity in the Council, which thwarted progress last year on the digital tax plans presented by the Commission.

Attempts to introduce a bloc-wide digital services act faltered following opposition led by Ireland, Finland and Sweden to a planned 3% levy on companies earning €750 million in revenue, €50 million of which would need to be EU taxable revenue. For its part, Parliament has long supported the idea of a digital services tax.

EU lawmakers will hold their first debate on Thursday (23 July) with the presidents of the European Council Charles Michel and the Commission, Ursula von der Leyen, on the basis of the leaders’ agreement. Talks should then start to secure an interinstitutional deal after the summer.