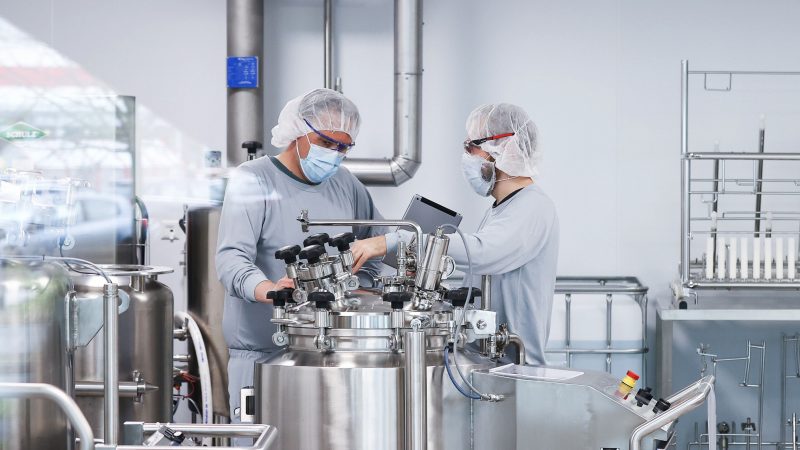 Employees at work on the Biontech/Pfizer's Comirnaty vaccine at Allergopharma's production facilities in Germany. [EPA-EFE/Christian Charisius]

Amid global criticism for holding on to vaccine patents during the pandemic, a new study commissioned by the European pharmaceuticals industry claims that integrating stronger intellectual property protection into free trade agreements would benefit the EU economy.

On Tuesday (11 January), the European Centre for International Political Economy (ECIPE) presented a study in which it analysed the importance of intellectual property (IP) protection for different industries, stating that IP-intensive industries constituted 44.8% of EU GDP and 38.9% of EU employment.

According to the study, the pharmaceutical industry is the most IP-intensive industry in Europe, followed by the ICT and electronics sector.

Trademarks, copyrights, patents, and geographical indications were considered as the relevant IP categories in the study.

ECIPE director and co-author of the study Frederik Erixon stressed that there would be “very strong macroeconomic effects” if IP protection in European free trade agreements were strengthened.

According to him, the economic benefits for Europe would come in form of newly stimulated economic activity but also in form of attracting investment that was previously done outside the EU.

“Investments that now go to other countries would go to Europe because we can offer better provisions for IP in our trade agreements with the world”, Erixon told an online panel.

“Inscribing stronger IP protection into EU free trade agreements, especially with poorer countries, would essentially lead to a financial transfer from poorer countries to the EU. I don’t think that this is sensible”, she told EURACTIV.

According to ‘t Hoen, however, the EU offers one of the most generous IP protection laws worldwide to the holders of patents, saying that even within the EU, there was a discussion about whether IP protection had gone too far.

“High prices of medicaments are increasingly a problem in the EU”, she said.

The difficulties of trade negotiations

Christophe Kiener, acting director responsible for intellectual property issues at DG Trade, on the other hand, emphasised that the EU Commission was defending IP protection when it negotiated free trade agreements.

Furthermore, Kiener stressed that the Commission had to respect sensitivities of member states and the negotiating partners who all have different interests regarding IP protection.

Nikos Lavranos, Secretary General of the European Federation for Investment Law and Arbitration and a former trade law negotiator, pointed out that negotiations had become harder in recent years and that negotiators could not expect to get everything they wanted.

“We might have used to be doing that in the past, but nowadays you cannot just come to the table and say ‘please sign here'”, he argued.

The study’s publication comes at a critical time for the pharmaceutical industry that funded it.

Second, the pharmaceutical industry is criticised for holding on to its patents for Covid vaccines, making it harder for low- and middle-income countries to access them.

Nathalie Moll, Director General of the European Federation of Pharmaceutical Industries and Associations, defended the industry’s insistence on IP protection during the pandemic.

“I am really grateful we had IP. Innovations like the mRNA vaccine didn’t happen out of the blue. It’s 20 years of investment because there was IP protection around mRNA”, she told an online panel when the study was presented.

Ellen ‘t Hoen, who used to campaign for access to essential medicines earlier in her career, emphasised another part of this story, namely the role of direct public financing.

“The vaccine against Covid-19 would not have been possible without public financing”, she told EURACTIV.

“If it has been publicly financed, do you really also need to create private monopolies to profit from this?”, she asked.