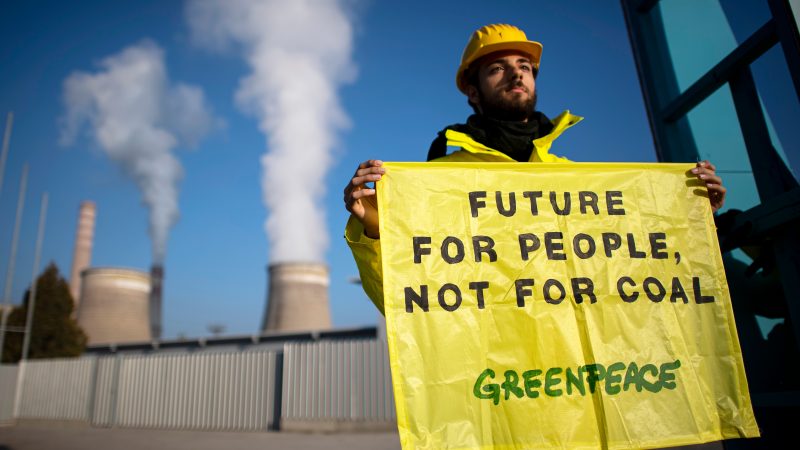 A Greenpeace protest calling to phase out coal in front of thermal power plant in the town of Pernik, Bulgaria [VASSIL DONEV / EPA-EFE]

Despite being a requirement, public consultation remains inadequate as Central and Eastern European (CEE) regions draw up the plans to unlock the €17.5 billion just transition fund, civil society has warned.

People in regions dependent on coal – which are most in need of the fund – were often sidelined in consultations leading up to the submission of the just transition plans to the European Commission, activists told EURACTIV.

The allegations are all the more worrying because the EU executive is forking out a pretty penny in structural support for consultants, tasked with aiding authorities to conduct social and economic impact analyses of the transition out of burning climate-polluting coal.

Even though there are online consultations in Bulgaria, with letters of invitation sent out to municipalities, business associations, NGOs and academic organisations, “this is not enough to generate meaningful engagement in the process – people living in the regions where the plans are being developed are poorly informed,” green public finance watchdog Bankwatch wrote in its spring assessment.

Another “big problem in Bulgaria is the lack of accessible and official information about the work of consultants, as well as about the input from the industry,” the NGO claimed.

The situation in Romania was not much better, with documents being sent without enough time for meaningful engagement in advance of the deadline, especially in Jiu Valley – one of the coal mining regions in the country.

The consultants are there to help the authorities produce the so-called territorial just transition plans, but they are not in charge of actually delivering the documents, Alexandru Mustață, just transition coordinator for the region at Bankwatch, told EURACTIV.

Meanwhile, the ministry of energy, which owns the energy complex in the most coal-reliant region of Gorj, is completely absent from the process, Mustață said.

The lack of consultation has clear consequences for the social acceptance of the process.

Romanian trade unionist Dumitru Fornea said the initial strategy for the Jiu Valley, drafted by a consulting firm, “unfortunately was not very well debated with the miners”, who dismissed the plan at first.

As a result, “the miners initially have rejected the possibility to work on this strategy together with the NGOs from Greenpeace or Bankwatch, but now they are more open.”

Circumstances, however, have been bringing trade unions and green NGOs closer together, even if their agendas may be somewhat at odds, with unions keen to preserve the livelihoods of their members and NGOs pushing for a fast transition away from carbon-intensive coal, which would entail job losses.

“Because of the just transition topic, I became very close with trade unions,” Georgi Stefanov from WWF Bulgaria told EURACTIV.

“Although they don’t like our idea of greening the energy sector, they understood more or less we are those who are really giving them the truth, the information, much before the others in Bulgaria,” he said.

“The problem is that nobody talks with the people who are directly and non-directly involved in the workings of the mining complex,” said Rumyana Grozeva, executive director at the regional economic development agency of Bulgaria’s biggest coal-producing region, Stara Zagora.

“There are no honest conversations to explain what will happen,” she added, pointing out more information about the plans would calm the workers and show them that the process is “under control.”

Criticism of transparency does not stop at the just transition plans: Concerns have also been raised about a lack of public consultation around EU countries’ recovery plans as member states rush to access the €672.5 billion pot of EU money.

It is a particular concern as the European Commission looks to bring everyone on board with the transition into a green and circular economy. Discussing with people on the ground the transition’s impact and ways to alleviate it will be key, but this has yet to happen in many regions in CEE.