Public investment: EU gives with one hand and takes with the other 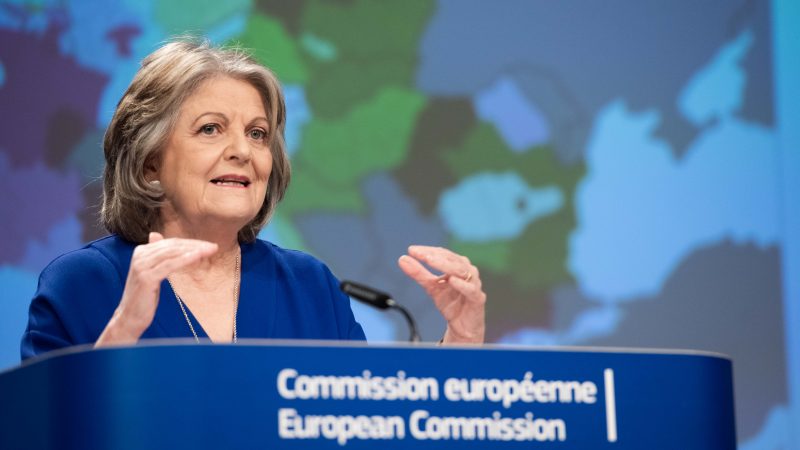 The new cohesion report by the EU Commission shows that a large part of public investment stems from EU cohesion funds rather than from member states themselves whose own investments are constrained by EU fiscal rules.

Many EU member states benefit from funding from EU cohesion funds, but Central and Eastern European countries, the Baltic states, Greece, and Portugal are among the countries that benefit most.

Between 2014 and 2020, on average more than half of public investment in those countries was financed by the EU, according to the 8th cohesion report that the EU Commission published on Wednesday (9 February).

Cohesion Commissioner Elisa Ferreira argued that no such replacement was happening. “I don’t think there is this crowding out of [national] public investment at all,” she said at a press conference presenting the cohesion report.

“What happens is that in a lot of circumstances, and particularly in the aftermath of the 2008 crisis, a lot of countries had to contract their public investment in order to comply with the macroeconomic constraints,” Ferreira said, arguing that the part of cohesion funding in overall public investment was more significant because public investment as such plummeted.

According to Commissioner Ferreira, the EU’s fiscal rules required countries to constrain their expenditures. However, because many countries could not reduce normal expenditure, they went for investment spending, she argued.

“They really reduced public investment to the limits,” Ferreira said.

The cohesion report shows how government investment as a share of GDP fell in most EU member states between 2008 and 2016 but most significantly in cohesion countries, before partly recovering from 2016 to 2019. 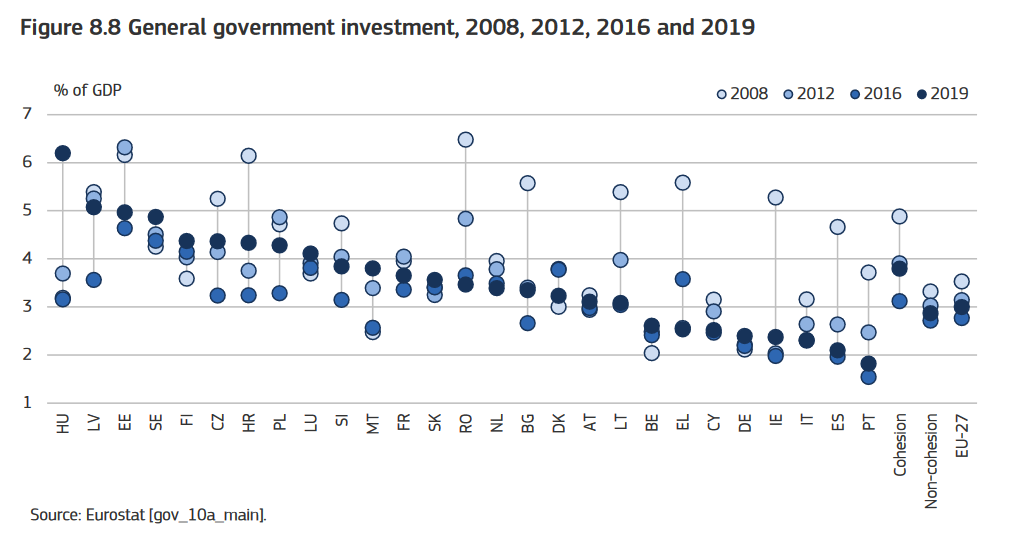 Development of public investment as a share of GDP in EU member states. Graph taken from the 8th cohesion report. [European Commission]

However, an EU official pointed out that the fiscal consolidation was not just demanded by fiscal rules but was also required by the behaviour of financial markets and the corresponding difficulty for countries to raise or renew their debt.

Nevertheless, in terms of public investment, the EU’s macroeconomic governance and cohesion policy seem to counteract each other.

This is not a new phenomenon. According to a recent report by the Polish Economic Institute, the contradiction between the goal of economic convergence and strict adherence to the EU’s fiscal rules, also known as the Maastricht criteria, had already been criticised when the fiscal rules were devised in the early 1990s.

During the presentation of the cohesion report, commissioner Ferreira called for a “no harm to cohesion” principle that should be taken into account when new EU policies and legislation are devised. If implemented, such a principle could also be used as an argument in discussions around fiscal rules that are currently being revised.

In 2021 the EU Commission announced a review of the fiscal rules, aiming to make them more growth- and investment-friendly. A general escape clause currently allows member state governments to ignore the rules to support the economy during the pandemic-related downturn.

However, if there is no reform, the rules are expected to come back into effect in 2023, mandating budget deficits not to exceed 3% of GDP and public debt levels to be reduced to 60% of GDP.

The French Minister of Finance Bruno Le Maire has been a vocal advocate for an investment-friendly reform of the rules, while other member state governments fear that opening the door to more investment would lead to unsustainable public debt levels.

The Commission is expected to present a reform proposal later this year.