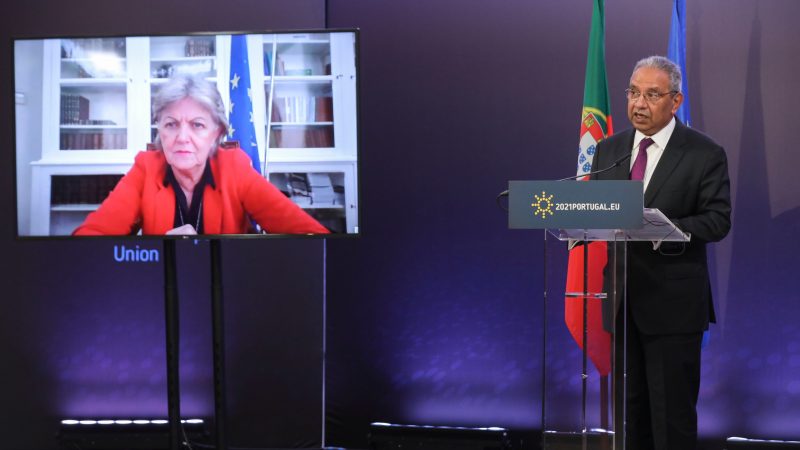 Portuguese Minister of Planning, Nelson de Souza, during the press conference after the informal meeting chaired by himself, by videoconference, of the ministers responsible for Cohesion Policy of the Member States of the European Union (EU), under the Portuguese Presidency of the Council, at Belem Cultural Center, Lisbon, Portugal, 18 May 2021. [EPA-EFE/MIGUEL A. LOPES]

The meeting brought together the EU 27 ministers and regional representatives to discuss how the EU’s recovery fund and cohesion policy can complement each other.

The fundamental principle is to ensure that “there is neither overlap nor double funding”, Portugal’s planning minister, Nelson de Souza told journalists after the talks.

The Recovery and Resilience Mechanism, the centrepiece of the €750 billion “NextGenerationEU” recovery package, will disburse €312.5 billion in grants and make available a further €360 billion in loans to EU countries to be spent before 2026.

The European Commission is currently looking at the recovery spending plans of the 18 member states that have already submitted them, while Portugal hopes the first group can already receive the green light in June, which would mean a pre-financing disbursement of 13% going to the member states’ coffers.

Meanwhile, EU countries are also busy programming for the bloc’s regular structural funds, which will channel a further €299 billion towards Europe’s regions.

However, the classical structural support instruments only need to be spent by 2029 leading to what critics fear will be a prioritisation of recovery fund spending and empty cohesion project pipelines.

At Tuesday’s meeting, Eleni Marianou secretary general of the Conference of Peripheral Maritime Regions (CPMR) warned that the parallel implementation of the cohesion policy programmes and the National Recovery and Resilience Plans (NRRPs) may lead to conflicts and overlaps, risks of double funding, additional administrative burden, or lack of strategic alignment between the funded investments.

“Our early analysis on the recovery plans submitted to the Commission so far has found that most plans provide only a vague indication as to how they intend to ensure an optimal coordination between NRRPs and cohesion programmes”, Marianou cautioned, calling for a closer involvement of regional authorities in the recovery fund implementation.

“The potential for complementarity is clear, and it is indispensable to explore it,” de Souza said, whose country is currently at the helm of the European Council, representing EU governments.

“All countries must have mechanisms to coordinate work, avoid duplication and promote convergence,” agreed cohesion and reforms Commissioner Elisa Ferreira, adding that it is also important to “look at the imbalances aggravated” by the crisis, which produced “more affected countries, more affected regions, more affected sectors”.

Therefore, she said, the spatial dimension “must come before and not after” the fact because “no policy is neutral or territorially blind”.

Acknowledging the “fairly heavy workload” involved in linking European structural funds and national recovery and resilience plans (NRRP), the Commissioner pointed out that only “full convergence” by the summer will allow “a structural exit” from the crisis caused by the COVID-19 pandemic.

Calling on the 27 to have a “structured vision”, Elisa Ferreira stressed that each country should maintain “coherence in using the different instruments at its disposal”.