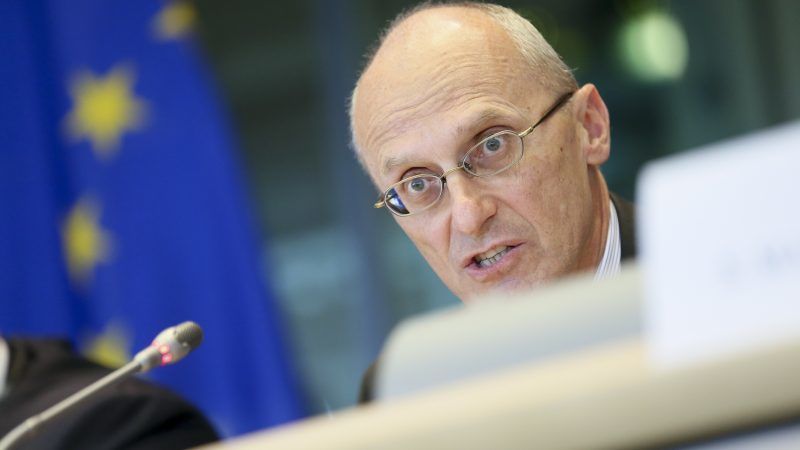 Andrea Enria, the chair of the ECB's supervisory board. [EPA/OLIVIER HOSLET]

Regulators are urging banks and insurance companies to exercise caution in handing out dividend payments to shareholders and bonuses to employees, as Europe continues to struggle to cement its recovery from the COVID pandemic.

With uncertainty over how the pandemic will evolve, and how quickly the economic recovery will pick up, financial regulators are calling for prudence from financial players to ensure they can weather the months ahead.

Last month, Andrea Enria, chair of the European Central Bank’s supervisory board, told reporters that the eurozone’s bank supervisor was trying to keep dividends and bonuses under control.

Enria said that “few banks” wanted to pay more than it was recommended, and in these cases, the supervisor was discussing the plans with them.

In the case of the insurance sector, the European Insurance and Occupational Pensions Authority (EIOPA) still holds its recommendation of extreme caution on dividends, bonuses and share buy-backs, an official told EURACTIV.

Last April, the ECB and EIOPA told banks and insurance companies to temporarily suspend dividend distribution and be prudent with other remuneration policies.

The demand was supported by EU finance ministers.

Leak: Capitals call for 'ambitious' use of bank regulation to help with coronavirus

As the pandemic evolved, the blanket ban on dividends changed to a case-by-case approach.

“Any dividend distributions, share buy-backs or variable remunerations should not exceed thresholds of prudency and institutions should ensure that the resulting reduction in the quantity or quality of their own funds remains at levels appropriate to the current levels of risk,” EIOPA told insurers in an updated recommendation in December.

Meanwhile, the ECB recommended extreme prudence until 30 September 2021. For that reason, as from the start of this year, banks are able to pay limited dividends and only if they are profitable and have “robust” capital trajectories capable of coping with the pandemic impact.

In spite of the parallel recommendations for banks and insurers, implementation has diverged on the ground, given the own nature of the regulators.

The ECB is the single supervisor for 113 biggest banks in the eurozone and has direct powers over them.

EIOPA, however, has regulatory competences but it is not a single supervisor for insurance companies in the EU, lacking binding powers to impose recommendations. It is up to national authorities to decide whether they follow their recommendation or to ignore it.

As a result, while big lenders followed the same criteria for dividends and bonuses during the pandemic, insurance companies faced different approaches from national authorities.

Germany’s financial regulator BaFin decided not to apply EIOPA’s recommendation and allowed Allianz to pay a dividend. Insurers in other EU countries also made payouts to shareholders last year.

Still, insurers said they “very carefully” consider their dividend policy, especially during uncertain times such as this.

“They also take very seriously any advice or requests from their national authorities and EIOPA,” an Insurance Europe spokesperson told EURACTIV.