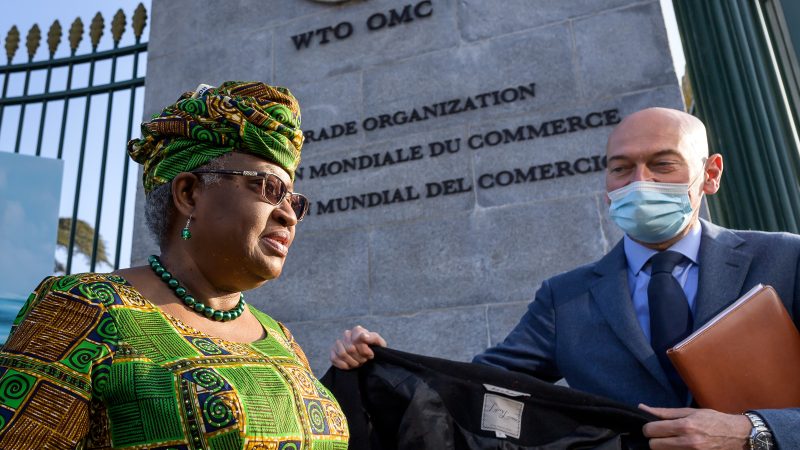 File photo. New Director-General of the World Trade Organisation Ngozi Okonjo-Iweala (L), walks at the entrance of the WTO following a photo-op upon her arrival at the WTO headquarters to take office, in Geneva, Switzerland, 1 March 2021. [Pool/EPA/EFE]

Richer members of the World Trade Organization (WTO) blocked a push by over 80 developing countries on Wednesday (10 March) to waive patent rights in an effort to boost production of COVID-19 vaccines for poor nations.

South Africa and India renewed their bid to waive rules of the WTO’s Trade-Related Aspects of Intellectual Property (TRIPS) agreement, a move that could allow generic or other manufacturers to make more vaccines.

South Africa argued the current TRIPS system does not work, pointing to the failure to secure life-saving medicines during the HIV/AIDS pandemic that had cost at least 11 million African lives.

Médecins Sans Frontières in October put together a letter signed by over 375 civil society organisations supporting the waiver.

The South Africa and India proposal was backed by dozens of largely developing countries at the WTO, but opposed by Western countries, including Britain, Switzerland, EU nations and the United States, which have large domestic pharmaceutical industries.

India is a major manufacturer of generics, although many of the largest generic companies are based in Western and developed countries, including Viatris, Sandoz and Teva.

Western nations argue protecting intellectual property rights encouraged research and innovation and that suspending those rights would not result in a sudden surge of vaccine supply.

In its eighth discussion on the topic since it was first raised in October, the WTO’s TRIPS Council spent three hours debating, but failed to agree. Proposals need backing by a consensus of the WTO’s 164 members to pass.

They did at least agree to discuss the matter twice again in April before the next scheduled TRIPS Council meeting on 8-9 June.

She said in a speech on Tuesday that manufacturers should come together with bodies such as the World Health Organization and vaccines alliance GAVI, whose board she used to chair, and business associations to look into options.

“We must make sure that in the end we deliver so that the millions of people who are waiting for us with bated breath know that we are working on concrete solutions,” the former Nigerian finance and foreign minister said.