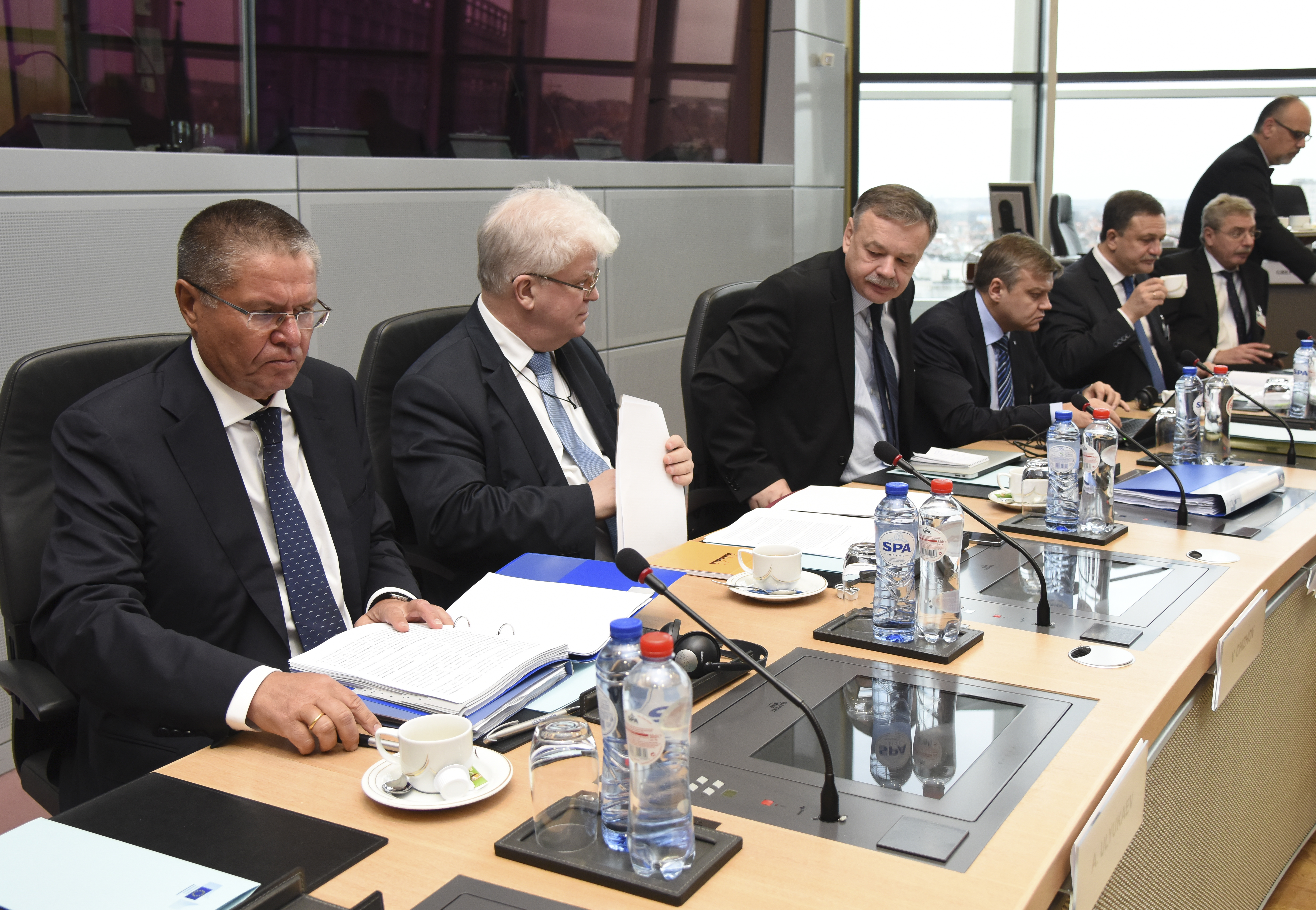 The Russian delegation at the Commission-hosted trilateral talks. [ European Commission]

Russia is likely to penalise Ukrainian imports from January after EU-brokered talks failed to find a compromise yesterday (1 December), exactly a month before the launch of an EU-Ukraine free trade pact that Russia opposes.

“It is a very probable scenario that there will not be an agreement before 1 January and the non-preferential trade regime will be introduced,” Russian Economy Minister Alexei Ulyukayev told reporters after the talks in Brussels, saying that existing preferential treatment of Ukrainian imports would probably end.

After the latest round of negotiations, the three parties agreed to keep talking. But time is running out before Ukraine and the European Union drop mutual trade barriers under a deal that has been at the root of wider confrontation with Moscow.

“The clock is ticking very, very fast,” said EU Trade Commissioner Cecilia Malmström after hosting the meeting. She stressed that Ukraine and the European Union would not heed Russian calls for them to amend their agreement or, following more than a year’s delay, put off its implementation any longer.

“On 1 January the DCFTA will enter into force,” she said, adding she was willing to continue trying to address Russian concerns into the new year, but only if Moscow did not take retaliatory measures.

Ukrainian Foreign Minister Pavlo Klimkin criticised Russian negotiators for delivering new demands on Tuesday, some of which he said were “unacceptable”.

The Ukrainian government says that two years of conflict with Moscow, initially triggered by Kyiv’s trade negotiations with its Western neighbours, have already run down Ukraine’s exports to its former Soviet partner, reducing the impact of sanctions in the form of a loss of favoured nation status.

Malmström told reporters that technical teams from the three parties could meet again as early as next week and spoke of a willingness to look seriously at issues Russia has raised, including veterinary standards and customs data-sharing.

But she noted the trade dispute was part of a broader political confrontation between Moscow and Western powers and said it was not clear there was the political will to resolve it.

Ulyukayev also said that there was a “high probability” that Russia would introduce a food embargo vis-à-vis Ukraine from 1 January. He explained that this had nothing to do with DCFTA, but was linked to the EU sanctions against Russia, which Ukraine joined in August.

Ukrainian wavering over whether to sign the EU trade accord in late 2013 fuelled protests that toppled the pro-Moscow president Viktor Yanukovich, leading to Russia’s annexation of Crimea and a revolt by pro-Russia separatists in the east.

Russia opposes the Ukraine-EU deal, saying it could lead to a flood of European imports across its own borders and damage the competitiveness of Russian exports to Ukraine.

The EU and Ukraine signed a Deep and Comprehensive Free Trade Agreement (DCFTA) on 27 June 2014 as part of a broader Association Agreement. [Read more]

The European Union will begin implementing the Deep and Comprehensive Free Trade Agreement (DCFTA) with Ukraine in 2016, despite Russian pressure for another delay.

The deal is at the heart of tensions that have grown out of a tug-of-war over influence in Kyiv to sanctions, the annexation of Crimea by Russia, armed conflict in eastern Ukraine, and concern in the West about a new Cold War.

According to the political declaration accompanying the Minsk agreement, the leaders of France, Germany, Russia and Ukraine support trilateral talks between the EU, Ukraine and Russia in order to achieve practical solutions to concerns raised by Moscow, concerning the implementation of the Deep and Comprehensive Free Trade Agreement between Ukraine and the EU.

The EU has been active and open to discuss potential Russian concerns, already the issue on the basis of the flexibility offered by the DCFTA. But the Commission said there was no possibility for renegotiating the agreement, as a large number of member states have already ratified it, or are in the process of ratification.