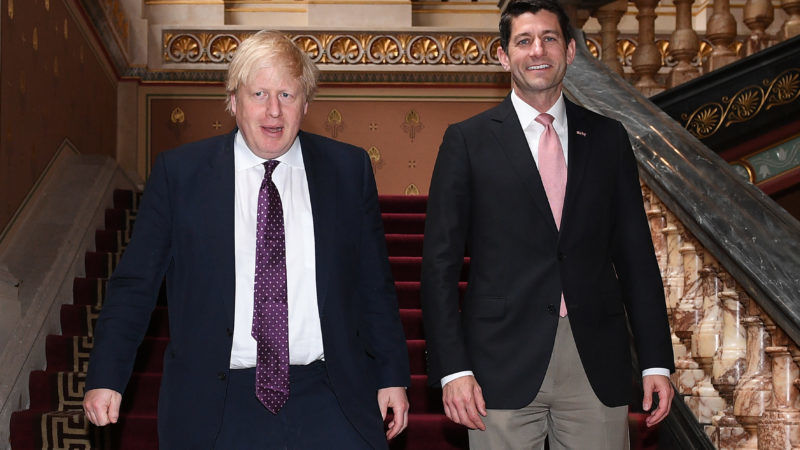 The United States is ready to negotiate a new trade deal with the UK. It also continues to have plans for the European Union, said Representative Paul Ryan, the Republican Speaker of the US House of Representatives.

Visiting London this week with a delegation from the lower chamber of Congress, Ryan declared: “This is one of the bipartisan messages I bring with me: that the United States stands ready to forge a new trade agreement with Great Britain as soon as possible, so that we may further tap into the great potential between our people(s),” in a speech at the Policy Exchange think tank on Wednesday (19 April).

The Wisconsin Republican also indicated that Washington had not buried trade talks with the EU. Referring to the now-frozen Transatlantic Trade and Investment Partnership (TTIP), Ryan indicated that “the United States will continue to work closely with our EU friends, and chart a path forward on TTIP negotiations”.

The US lawmaker also encouraged London and Brussels to “strike a lasting agreement”. “A strong UK-EU relationship is in all of our best interests,” he commented.

Rejecting accusations that the US and UK are tempted by protectionism and isolationism, Ryan asserted: “We are more determined than ever to lead. We don’t want China to write the rules of the 21st-century global economy. We want to do that. We want a level playing field for our businesses.”

The US will still be negotiating free trade deals “but they have to be smart trade deals [that] help workers and raise wages”, Ryan said. “And we must continue to sharpen tools to combat unfair trade practices,” he stressed.

Praising the “special relationship” between the two countries, he drew a parallel between both nations’ political developments in 2016. In the same year that Donald Trump was elected president of the United States, the Brexit referendum ended 40 years of British EU membership.

“Our countries have voted for sweeping change. Some try to say too much change. But if anything, we are seeing a renewal of first principles, of people reasserting their right of self-determination against arrogant and paternalistic elites,” Ryan stated.

The future US-UK relationship will be measured by its capacity to “leverage this moment to seize a real opportunity for our two nations”, he added.

The Trump Administration’s trade policy with the EU and Brexit Britain is not set in stone. There have been recriminations among White House officials close to the president against Germany, in particular – but also other EU members – related to their export surplus with the US.

Ryan’s speech signals willingness in Congress to move ahead on TTIP, an issue the White House has taken no formal position on yet.