Juncker met Trump in Washington on Wednesday (25 July) in a last-ditch effort to convince him to hold off imposing punitive tariffs on European auto exports to the US.

A disaster was anticipated but in the end Juncker and Trump told reporters that the sides would open negotiations to strengthen trade relations.

I came for a deal, we made a deal. The EU continues to stand up for free and fair trade. My joint statement with @realDonaldTrump: https://t.co/JISJJ1CWR2 pic.twitter.com/GMpS0ZL5Ul

In addition, both sides would work to “resolve” the steel and aluminum tariff dispute, and would not impose fresh restrictions while the talks are ongoing.

“As long as we are negotiating, unless one party will stop the negotiations, we hold off further tariffs,” Juncker said. 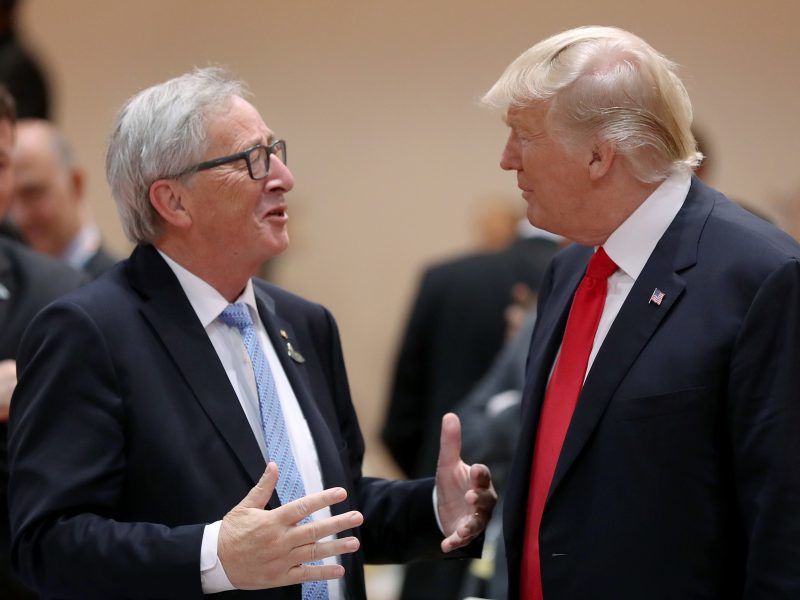 Juncker in last-ditch bid to ‘dedramatise’ tensions with Trump

European Commission chief Jean-Claude Juncker heads to Washington on Wednesday (25 July) in a last-ditch effort by the EU to cool nerves and find an exit door from an all-out trade war with US President Donald Trump.

In his visit to the White House, the EU executive chief achieved the most pressing goal: avoiding fresh tariffs on the European automotive industry that could further escalate the dispute between the two sides.

The meeting took longer than expected because Trump insisted on requesting the EU to open up its market for his agricultural sector, an EU official told this website.

But Juncker knew this was a red line for EU member states.

After three hours and a half of negotiations, Juncker accepted bigger exports of soybeans to the EU.

EU officials argued that this concession fell under the flexibility national governments gave Juncker during the round of phone calls with various national leaders he had before his trip.

Trump said that the EU would buy “immediately a lot of soybeans” from US farmers “in the Midwest primarily”.

European Union representatives told me that they would start buying soybeans from our great farmers immediately. Also, they will be buying vast amounts of LNG!

Soybean farmers in Midwestern states, an important group of Trump’s supporters and key voters for the Republicans in November elections, were affected by the retaliatory measures imposed by China as a response to US fresh tariffs.

The US sells about $14 billion worth of soybeans annually to China, the world’s top buyer of the commodity.

For Europe, the effort would be minimal. Soybeans exports to the EU are free of tariffs as Europe needs them, and the US seeds are of good quality, an EU official noted.

“I thank you for that, Jean-Claude,” Trump said during one of the only occasions he went off-script from the agreed statement.

This fresh concession added to past offers made by the Europeans, which were also included in the final communiqué. For example, the EU’s interest in importing more liquefied natural gas (LNG) from the US to diversify its energy supply.

“They are gonna be a massive buyer of LNG,” Trump said, who added that we are going to make it easier for them.

Against the backdrop of this fresh start, both sides agreed to resume trade talks “to work together toward zero tariffs, zero non-tariff barriers, and zero subsidies on non-auto industrial goods”, Trump said.

He added that the EU and the US will also work to reduce barriers and increase trade in services, chemicals, pharmaceuticals and medical products.

“This will open markets for farmers and workers, increase investment, and lead to greater prosperity in both the United States and the European Union,” the US President insisted.

Accordingly, both sides intend to revisit many, if not most, of the chapters included in the Transatlantic Trade and Investment Partnership (TTIP) that Trump sent to the freezer.

In addition, the EU and the US agreed, together with other “like-minded partners” to reform the World Trade Organisation so it is better equipped to address unfair trading practices, including intellectual property theft, forced technology transfer, industrial subsidies, distortions created by state owned enterprises and overcapacity.

China is blamed both by Washington and Brussels for IP stealing, illegal subsidies and abusive trade practices.

An Executive Working Group of “closest advisors” of both presidents will be in charge of implementing the agreement.

This group would also assess “existing tariff measures”, a reference to review existing car tariffs, an EU official noted. Trump has made of lowering EU’s 10% tariffs on US cars one of his primary obsessions.

The meeting exceeded what were low expectations in Brussels.

“This was a good and constructive meeting,” Juncker said.

Trump said that the meeting opened “a new phase in the relationship between the US and the EU – a phase of close friendship, of strong trade relations in which both of us will win”.

Apart from the differences on the agricultural sector, EU sources noted that the climate was “very good”. As an example, officials mentioned that Trump decided in the last minute to appear before the press and he invited Juncker to accompany him.

Trump sat down in the room with his secretaries of commerce and the treasury, Wilbur Ross and Steve Mnuchin.

Juncker was accompanied by Trade Commissioner Cecilia Malmström, as well as other officials, including former righthand-man Martin Selmayr.

Europeans noted that Trump’s advisors were interested in a deal. “Nobody would have benefited from an escalation,” an official said.

The US and the EU together count for more than 50% of global GDP and boast a $1 trillion bilateral trade relationship.

My first impression: the old fox @JunckerEU distracted #Trump from car tariffs and other disastrous nonsense by giving him something he really needs domestically, ahead of the midterms: more soybean imports. And Trump gleefully took the bait ("Soybeans are a big deal!").

One response to “Soybeans bring appeasement to EU-US trade war”